Oxford, Connecticut – November 11, 2022: Commemorating this year’s Veteran’s Day, a special salute to those who served, sacrificed, and gave so much to this great nation, the D-Day Squadron shares the theme of its upcoming return to Europe in 2024: 2024 Legacy Tour. The timing of this announcement comes as both the D-Day Squadron and Sound Off Films share the release of the 2019 documentary film, “Into Flight Once More” now available on DVD and Blu-Ray for purchase. 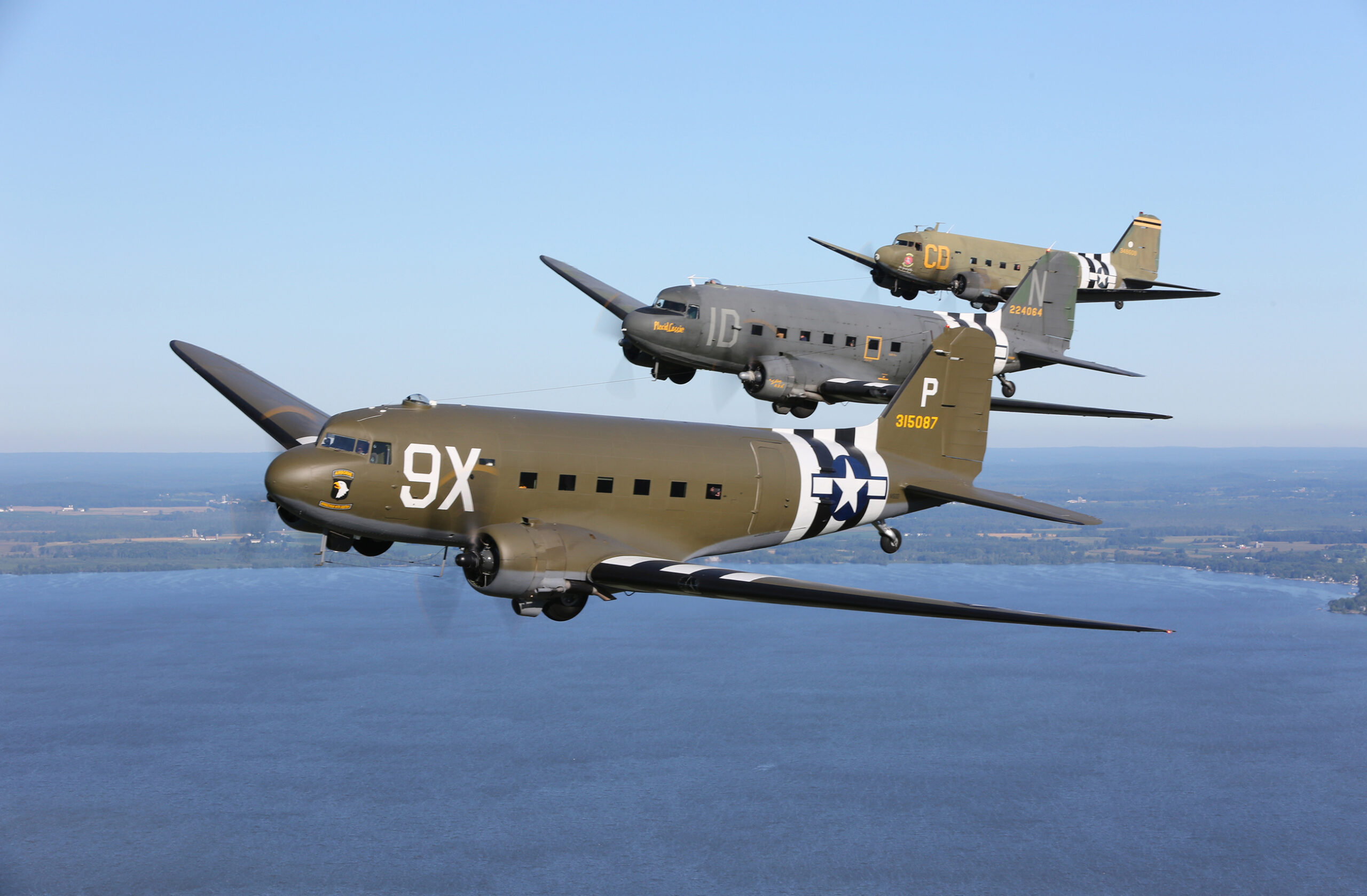 “In 2019, our focus was to remind people how World War II veterans more than 75 years ago fought for our freedom, liberties and served, where many lost their lives so we may live,” shares Eric Zipkin, the missions’ chief pilot and director of operations. “In 2024, with so few World War II veterans with us, we will recreate the journey to Europe and fly each commemoration to protect their ‘Legacy,’ to never forget what these veterans meant to each of us, and our world history.”

The picturesque and patriotic documentary from the D-Day Squadron’s 2019 mission is directed and produced by Emmy nominee Adrienne Hall in her feature documentary directorial debut and proudly narrated by Academy Award ® nominee and veterans’ advocate Gary Sinise (1995 Best Actor in a Supporting Role). Now finally available in Blu-ray and DVD formats, it is a wonderful memento for all our veterans and everyone who admires them and their heroic exploits and is also available on all major retail streaming platforms.

Planning for the mission is already underway. A volunteer committee of seasoned professionals is being established to help organize and manage logistics in support of another remarkable mission to honor, pay tribute, and commemorate World War II veterans.

The D-Day Squadron is currently working with corporate and individual partners, donors, and support to bring this mission airborne. Those wishing to participate, if not already, are asked to contact the D-Day Squadron’s executive director, Lyndse Costabile, at: director@ddaysquadron.org

Additional DC-3 operators wishing to get involved are asked to complete this Google form: Join Us: 2024 Legacy Tour of the D-Day Squadron

For more information from the D-Day Squadron: DDaySquadron.org

To purchase a DVD: Into Flight Once More DVD

Learn More About the 2019 Mission

The D-Day Squadron started screening “Into Flight Once More” a film that documents the 2019 journey. Several film premiers and screenings across the U.S. this year included having multiple DC-3s from the film on display for audiences. Produced by Sound Off Films and narrated by Gary Sinise, the film brings to life the stories of World War II veterans, crews, and a most historic reenactment of “Operation Overlord,” the codename for the Battle of Normandy, which took place on June 6, 1944. Currently, the film is available to watch on four streaming platforms including Apple TV, YouTube, Amazon Prime, and Hulu.

About the DC-3 Society & D-Day Squadron

The DC-3 Society is a program of the D-Day Squadron with the purpose to promote DC-3-type aircraft airworthiness, serve members, and promote static and flying displays for future generations. The North American DC-3 Society was born to organize the collective efforts of enthusiasts, pilots, mechanics, and operators. It actively educates and involves the next generation in “flying freedom” and celebrates everything the DC-3 has accomplished in war and peace.

The D-Day Squadron is part of the Tunison Foundation, a non-profit 501(c)(3) charitable organization. In June 2019, the D-Day Squadron led an American fleet of 15 historic, restored C-47 World War II military aircraft to take part in a flyover of more than 30 international aircraft to drop over 200 paratroopers over the original 1944 drop zones in Normandy commemorating the 75th anniversary of D-Day. The event honored the citizen soldiers of the War, whose bravery led the Allies to the liberation of France, and then to an end of the devastating War in Europe. The Squadron’s education program takes the compelling story of the citizen soldier to audiences at airshows and events off the flight line to honor these brave Americans and ensure their memory and significance are appreciated for generations to come. The group’s efforts are funded through the generous tax-deductible contribution of their supporters. Learn more at DDaySquadron.org. 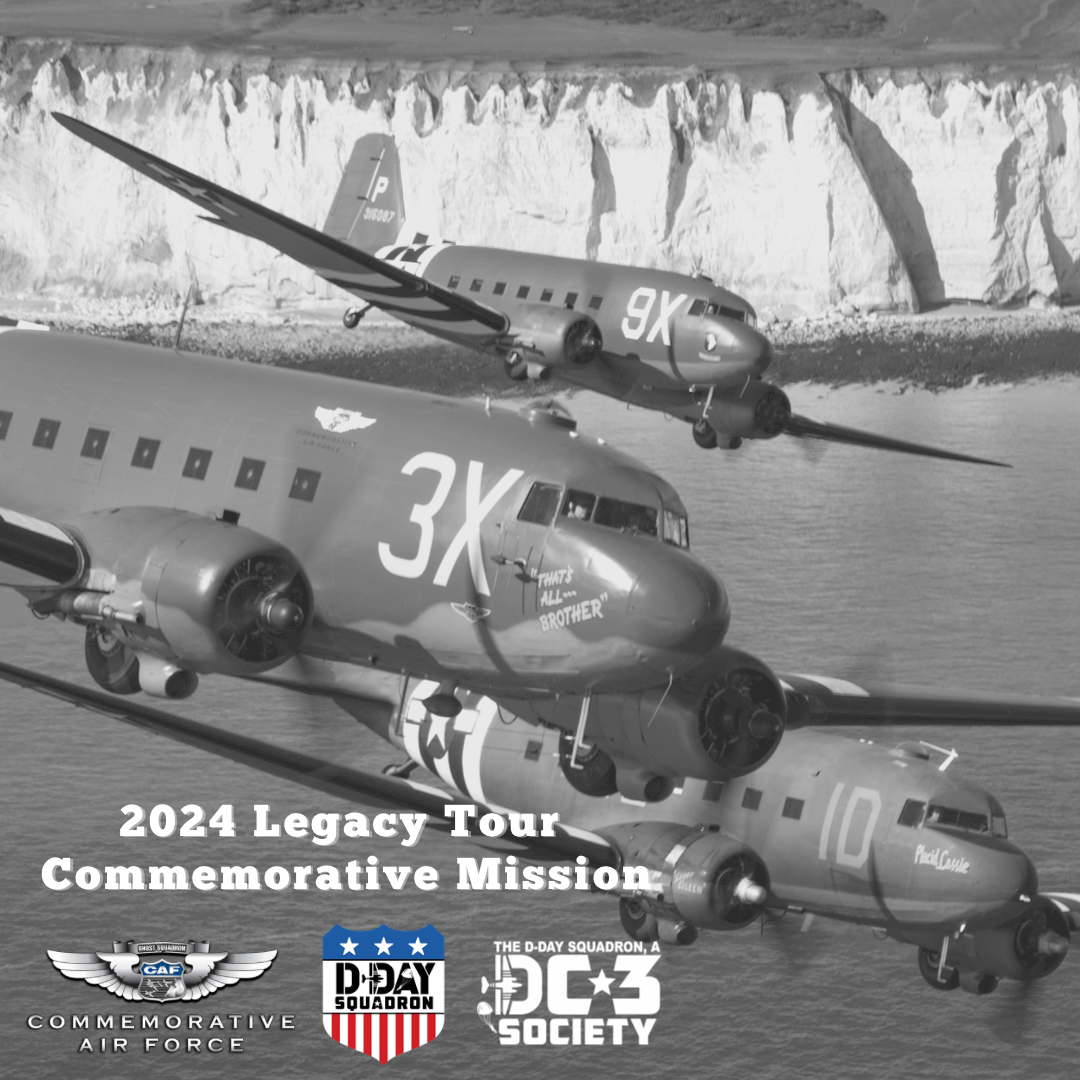