As many WarbirdsNews readers will be well aware, the Connecticut Air & Space Center in Stratford, Connecticut has been hard at work on many fronts since we last visited with them some months back. Whether it be the magnificent restoration of the FG-1D Corsair under their care, or the rebuild of the unique Sikorsky S-60 ‘Flying Crane’ from a basket case wreck, or the TV-2 Seastar they are rebuilding amongst many other ongoing projects they have, the results are simply astonishing. There cannot be many museums in the world that work as effectively, nor on so many fronts as CASC do, on so little funding. Every dollar counts, and the team of volunteers they have would be the pride of any institution. Perhaps the most daunting task they are currently engaged in is the restoration of the unique, 1928 Curtiss Flying School hangar at their home base, the Igor I. Sikorsky Memorial Airport in Stratford, Connecticut. Not only are there enormous financial hurdles to overcome, but the red tape involved in such a project probably weighs nearly as much as the hangar itself. It has been a very complex deal, but the museum is moving forwards, undaunted. They have recently released an update on the current status, and we thought our readers would enjoy hearing what they had to say…

Connecticut Air & Space Center’s Curtiss Hangar Restoration Project has made significant progress since signing the Lease with the City of Bridgeport to restore and occupy the historic hanger approximately a year ago. The State of Connecticut has confirmed its agreement to CASC’s request that the original State funds grant awarded over a decade ago be “re-purposed” to the restoration of the Curtiss Hangar. CASC has also been able to obtain from the State a general waiver of certain coastal floodplain requirements which could have made the Restoration Project financially unfeasible. Similarly, CASC has been able to obtain authorization from the State historic preservation authorities to make use of modern and environmentally “green” materials in connection with the restoration rather than compelling the use of 1920’s materials as originally used in the Hangar’s construction. Requisite environmental sampling and testing of the Hangar site is now complete and the analysis has determined no adverse environmental conditions at the site.

The City of Bridgeport has generously agreed to provide substantial “in-kind” assistance to CASC during both the restoration and CASC’s subsequent occupation of the Hangar throughout the term of the Lease, a contribution considerably positively impacting the financial feasibility of the Project. Additionally, the City has made a substantial financial contribution to the Project in connection with the restored Hangar being the new, environmentally-protected home of the City’s FG-1D Corsair. Vought designed and manufactured the prototype XF4U Corsair in Stratford at what became the Stratford Army Engine Plant. The XF4U even sheltered under the beams of the Curtiss Flying School hangar during its life, as did so many other Corsairs before flight testing. They all used the Bridgeport municipal airport (now the Igor I. Sikorsky Memorial Airport) to fly from as well. So displaying a perfectly restored Corsair within a marvelously restored vintage hangar beside its adjacent historic counterpart “Blue Sky Hangar” makes CASC’s Curtiss Hangar Restoration Project a unique opportunity to preserve Connecticut’s and the world’s aviation history.

The Town of Stratford has not only generously made a substantial financial Block Grant contribution to the Project but also tasked its government finance and building projects experts with lending to CASC their considerable expertise in the selection of qualified architects, engineers and historic restoration specialists. Together with the Town experts, the Project Team has interviewed and evaluated such qualified firms and Invitations to Bid will be issued shortly in anticipation of structure assessment, remediation and preservation work beginning relatively near term.

We would like to thank Gene Madara, CASC President and Mark Corvino, CASC Vice President for their continued efforts in moving this project forward and this great recap of whats happening with the project. 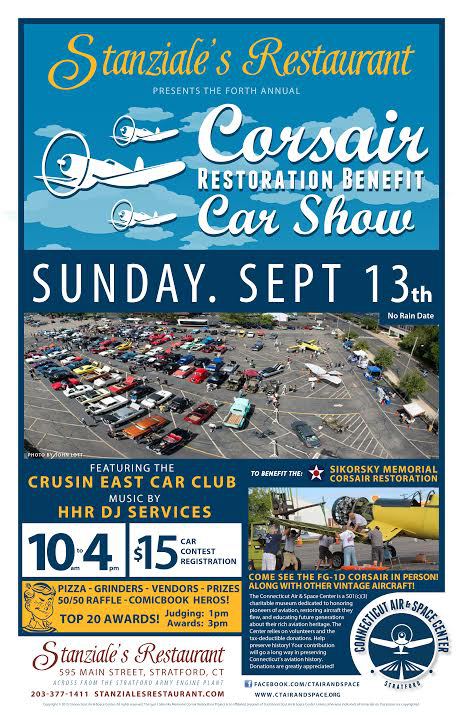 CASC will also be holding their 4th Annual Corsair Restoration Benefit and Car Show on Sunday, September 13th, so be sure to visit if you have the opportunity. They are also looking for volunteers to help out at the show as well (please contact casc@ctairandspace.org if you are willing and able). Proceeds, as the title suggests will help fund the Corsair’s restoration.