Two World War II transport aircraft named, That’s All, Brother, and D-Day Doll, will perform at the Paris Air Show. Both aircraft are owned and operated by the Commemorative Air Force, the world’s largest flying museum. Seventy-five years ago, both aircraft participated in D-Day, the Allied invasion of Europe and liberation of France. The American aircraft have traveled to Europe to participate as part of the D-Day Squadron, a fleet of 15 World War II aircraft based in the U.S. and flown to England, France, Germany and Italy to commemorate the 75th anniversary of D-Day. C-47 That’s All, Brother will fly on June 21 and 23 and C-53 D-Day Doll will fly on June 22. When the aircraft are not flying they will be on static display where attendees can tour through the aircraft.

“The mission of the Commemorative Air Force is to educate, inspire and honor through flight. Being part of this program and participating in the Paris Air Show provides an opportunity for people to step inside the aircraft and learn more about our history hands on,” stated Hank Coates, President of the Commemorative Air Force. “This tour has been great for our organization, an opportunity to share living history with the world, and bring much needed attention to the importance of preserving and remembering those who fought for our freedom. 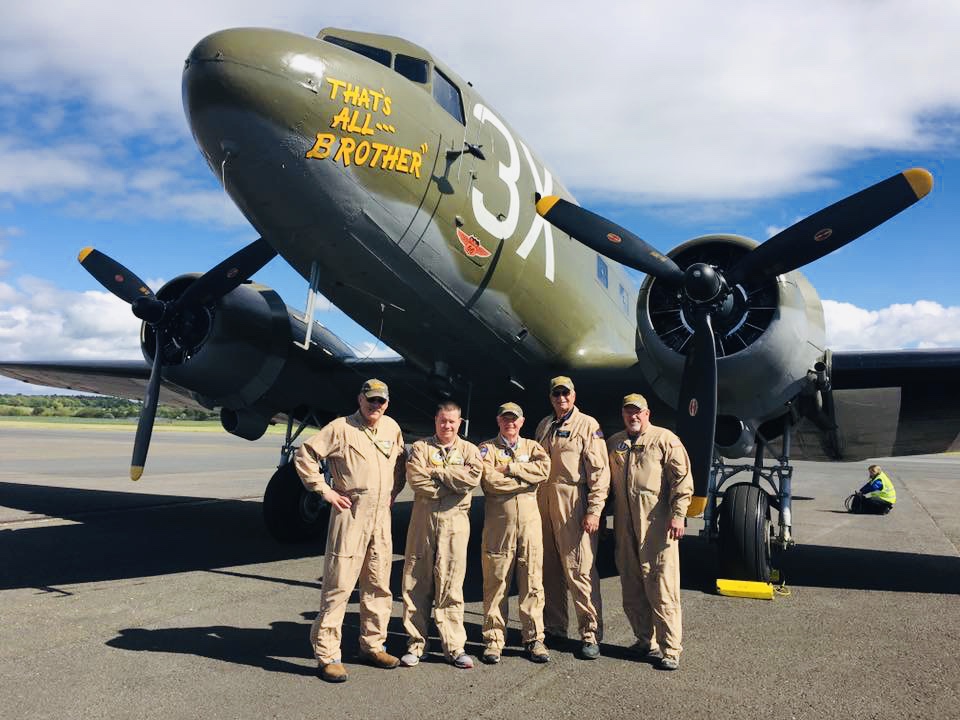 These aircraft have each travelled over 6,500 miles since departing the U.S. Following the Paris Air Show the aircraft will return following the same route traveling back up through England to Iceland, Greenland, Canada and finally the U.S. Participation was largely backed by Phillips66 Aviation lubrication as well as hundreds of individuals who donated to support the project to bring the aircraft back to Europe. Aircraft of the D-Day Squadron have participated in several monumental events this month including flying in tandem with the U.S. Air Force as part of the official 75th commemoration of the Invasion of Normandy and honoring the 70th anniversary of the Berlin Air Lift with the original “Candy Bomber” Gail Halvorsen.

“Attendees at the Paris Air Show will see firsthand what aviation accomplished during two of the most pivotal turning points in the history of the 20th century. Much of the cutting edge designs of today owe quite a bit to the pioneering concepts that broke ground with the development of the C-47 and DC-3 aircraft,” added Lyndse Costabile, PR Liaison for the D-Day Squadron. “It only makes sense to have these aircraft here alongside the latest innovations in aerospace to show the leaders of tomorrow just what can be accomplished with the right drive and spirit.”

Be sure to keep up with the latest news and events as the D-Day Squadron continues on to the next leg of its historic journey. To learn more about the Commemorative Air Force and see how to support the organization’s efforts visit www.CommemorativeAirForce.org.

The Commemorative Air Force® (CAF) is a nonprofit organization dedicated to educating, inspiring and honoring through flight and living history. The fleet of over 170 airplanes is spread across the U.S. and is maintained and flown by volunteers. These World War II aircraft fly in order to honor the legacy of the Greatest Generation. Through historical reenactments and programs such as CAF RISE ABOVE®, the CAF educates and inspires young people to “rise above” their own challenges by using the real stories of heroes from American aviation history. Learn how you can support and participate in the CAF at www.commemorativeairforce.org.

The D-Day Squadron is the part of the Tunison Foundation, a non-profit 501(c)(3) charitable organization. In June 2019, the D-Day Squadron led an American fleet of 15 historic, restored C-47 World War II military aircraft to take part in a flyover of international aircraft over the official ceremony commemorating the 75th anniversary of D-Day. The event honored the citizen soldiers of the War, whose bravery led the Allies to the liberation of France, and then to an end of the devastating War in Europe. The Squadron’s education program takes the compelling story of the citizen soldier to audiences at airshows and events off the flight line to honor these brave Americans and ensure their memory and significance is appreciated for generations to come. The group’s efforts are funded through the generous tax-deductible contribution of their supporters. Learn more at DDaySquadron.org.