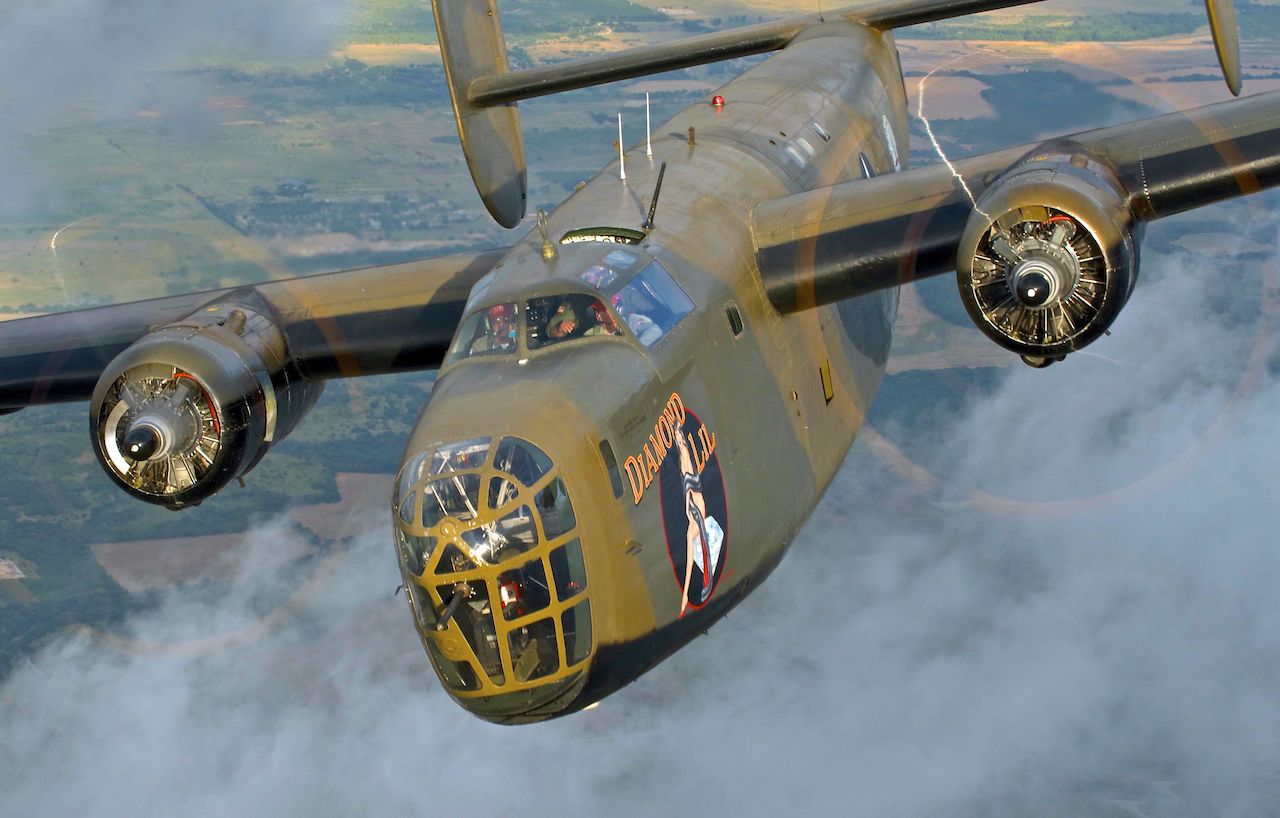 The Commemorative Air Force has just announced that their unique B-24A Liberator known as “Diamond Lil” will be making a tour of North America’s east coast in June. Some of the notable events that the venerable bomber will be making appearances at will include the Mid-Atlantic Air Museum’s WWII Weekend in Reading, Pennsylvania as well as the Canadian Warplane Heritage Museum’s Hamilton Night Airshow in Hamilton, Ontario. The night time air show in Hamilton will mark the first time in decades that a B-24 has flown in Canada, and they expect to also run the engines at night, alongside the Lancaster, and perhaps even the Military Aviation Museum’s deHavilland Mosquito.

Diamond Lil will also visit Buffalo, New York and make several stops in Ohio, including an appearance at the Dayton Vectren Air Show.

While on tour, Diamond Lil will be available for guided tours (for a donation), and the public is invited to purchase Living History Flight Experiences aboard the aircraft. Rides, which sell for $395 each, can be booked in advance  online at www.AirPowerTour.org. Information about each tour stop can also be found at that website.

*No living history flight experiences available at these stops.

About the CAF’s B-24 Liberator Diamond Lil:

Diamond Lil was just the twenty-fifth Liberator to roll off Consolidated’s production line in San Diego, California, taking flight in 1941. The Royal Air Force were due to receive her as an LB-30, serial number AM927, however a landing accident delayed her delivery long enough that she ended up staying with the factory as a B-24A test ship. Consolidated converted her into the prototype C-87 transport, which included deleting her bomb bay. After the war, she operated as a transport with a number of different civilian companies. The CAF purchased her in 1967, and she has flown with them ever since, thrilling many hundred thousand air show goers. She is the oldest remaining B-24 of over 18,000 produced, and one of just two still flying. The Liberator underwent a major restoration in 2006, receiving many modifications to more resemble a B-24A once again, and a new name, “Ol’ 927″. In the winter of 2011-2012 her operating Squadron voted to rechristen her Diamond Lil again with newly updated nose art. The Commemorative Air Force’s B-29/B-24 Squadron maintains and operates the Liberator, and are currently based at the Vintage Flying Museum in Fort Worth, Texas.