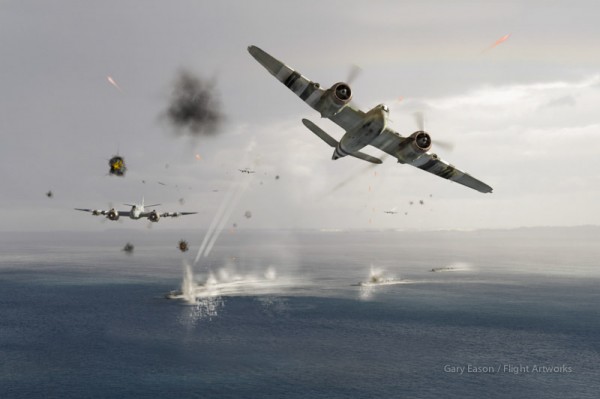 Aviation artist Gary Eason has licensed four of his latest series of D-Day related pictures to the Mortons Media Group for use in their special 70th anniversary title. Eason’s Flight Artworks depict mostly World War II aviation scenes in a photorealistic style. He is known for his careful research and historical accuracy. The pictures Mortons is using feature a variety of RAF warplanes on invasion-oriented operations before, during and after D-Day on 6 June 1944.One is a D-Day ‘big picture’ featuring Operation Mallard on the evening of 6 June. This was when a variety of ‘heavies’ towed gliders into Normandy carrying elements of the British 6th Airborne Division.The picture shows Short Stirlings towing Horsa gliders, with Spitfires and Mustangs escorting them, and a Hawker Typhoon squadron on an armed reconnaissance flight.

Another shows Douglas Bostons (Havocs) streaking at low level over the French countryside. A third, the dramatic sight of Bristol Beaufighters in a rocket attack on German e-boats just off the French coast. And the fourth features the unusual combination of Spitfires escorting Lancaster bombers during daylight – a tactic that RAF Bomber Command returned to in June ’44.

Eason added: “I showed Clive a couple of drafts while I was working on the big D-Day picture. He  was very helpful and encouraging and I’m pleased to say he was delighted with the result.”Rowley said: “From my point of view as a pilot for the last 43 years and a RAF fighter pilot for 30 years, the realism he captures is uncanny, starting with the backgrounds, the skies and the light, and then in the detail of the aircraft that are the subjects.”It is as if the quality of a modern digital camera was there at the actual wartime event, in a ‘photo-ship’, all those decades ago.” He added: “The superb detail and accuracy in his images are the result of Gary’s extensive research and his desire to get history right, to accurately represent the actual event”.

All the pictures are available as prints in a variety of formats via the Flight Artworks web pages at www.flightartworks.com.  Enquiries about further licensing are always welcome, with immediate high-resolution downloads available from the site.  The D-Day bookazine is available from Amazon, click HERE. 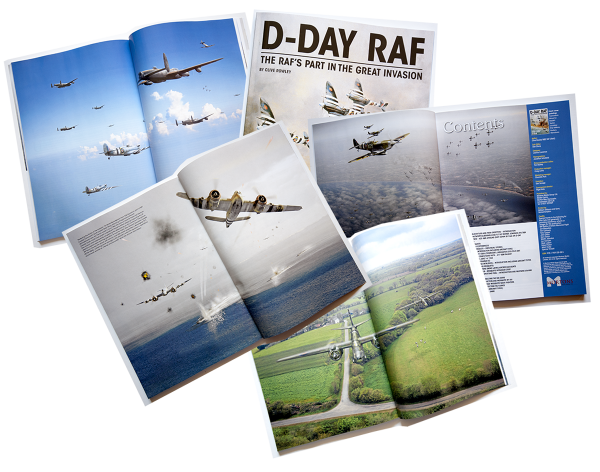