I think we can all agree that this year has taken a surreal and bizarre direction. 2020 started off promising. The world economy was gaining ground, unemployment was at record lows, and there was an air of optimism in the average conversation. Then, March arrived, and 2020 went off the rails as the virus reared up and quarantining began. While most of us were sequestered at home, the healthcare industry and first responders mobilized to fight the virus head on.

The effects of the pandemic have ravaged many industries, but the aviation industry in particular, not to mention our beloved air shows, which all of us have missed. Like dominos, one aerial event after another fell by the wayside. And air shows are a major avenue for the military jet demonstration teams to display their prowess in the skies, so without them, how were they to reach their public? But in April, a unique idea took flight. Since the Blue Angels and Thunderbirds were already funded for the 2020 air show season, why not repurpose their skills towards a good cause? So, the Blue Angels and Thunderbirds partnered for multi-city flyovers to celebrate our health care workers and first responders. Such was their positive impact that many cities began to organize their own flyover events in response…

Addison Airport (KADS), in Addison, Texas, is home to one of the premier aviation museums in the nation. In early May, the Town of Addison contacted Doug Jeanes, museum director for the Cavanaugh Flight Museum (CFM), about organizing a flyover. The museum had been hit hard with the recent closures, and Doug was excited to open the museum and roll out a few warbirds to take part in the flyover. The timing was tight, since the Town of Addison wanted to conduct the flyover on Friday, May 22, the beginning of the Memorial Day weekend. They named the flyover ‘Salute to Heroes’ in honor of veterans, health care workers, and first responders.

The next two weeks involved a tumult of planning and logistics organization. The group of pilots needed to develop the flight path  and get it approved. Calls went out to the local aviation community to see who could participate, and maintenance efforts spun up on the aircraft which the museum would contribute to the cause.

The morning of May 22 was warm, humid and windy, but it was exciting to see the activity at CFM after almost six weeks of mandatory closure. The airport ramp was filled with participating aircraft and many people were milling around them, glad to be at the event and out of the house. 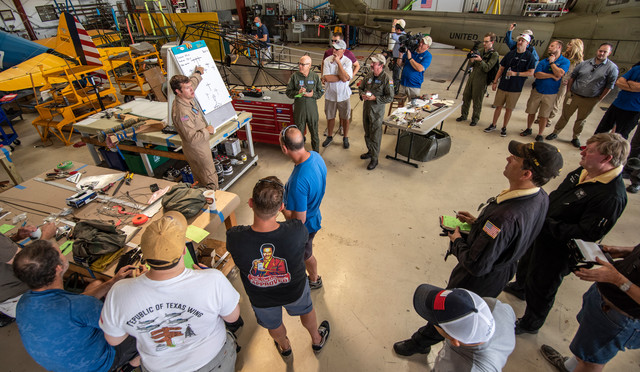 Ben Wilson led the pilot briefing at 10:00 a.m.; he would be PIC in the museum’s rare B-25H Mitchell ‘Barbie III’. Barbie would take the lead in the first formation which included five T-6 Texan/SNJ/Harvard variants and a T-34 Mentor, all sticking to Barbie like baby ducks following their mama. This formation comprised two elements answering to the call signs of ‘Alpha’ and ‘Bravo flight’. Alpha and Bravo would fly the course at 1000’ AGL (Above Ground Level) at 120knots (140mph).

The second formation would involve the ‘fast-movers’ and fly independently to Alpha and Bravo flights. Two T-28’s, a P-40, and a T-37 would fly a loose formation around Alpha and Bravo under the call sign ‘Charlie flight’. Flying behind all of these formations came a unique and exceedingly rare Beechcraft Starship. Charlie flight and the Starship would add to the excitement for all those looking skyward along the route.

In all, thirteen aircraft participated in the flyover. CFM provided the following: 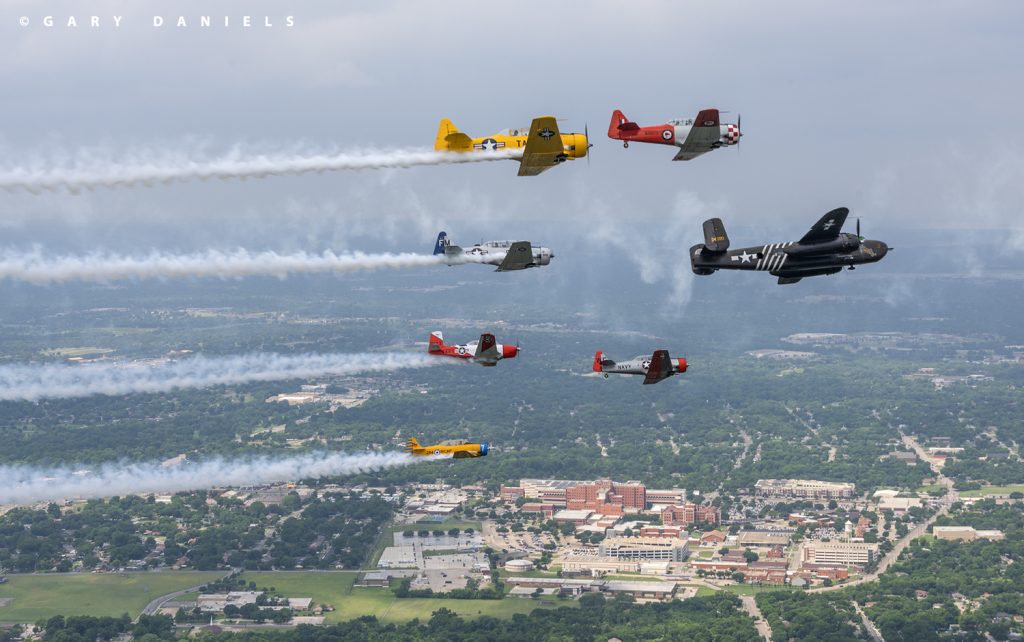 Engine start took place at 11:00am, and  soon all of the aircraft began to ‘elephant walk,’ with ‘Barbie’ in the lead, to Runway One-Five for a southbound departure. The aircraft taxied past a display of fire department vehicles and first responders, with local media capturing the moment. The long line of aircraft took their positions on the taxiway and in the run-up area to check their engine performance. Hundreds of people had gathered just outside of the fence line to see the thirteen aircraft launch. ‘Barbie’ began her take off roll at 11:30 a.m., and soon all of them were airborne. After a southbound departure, Alpha, Bravo, Charlie and the Starship formed up quickly and circled over Addison Airport, before heading north to officially start the flyover.

The flights first flew over Carrollton Regional Medical Center, in Carrollton, then over Texas Health Presbyterian Hospital and Baylor Scott & White Medical Center in Plano. Turning south, they then flew towards downtown Dallas, flying over Medical City Dallas, Texas Health Presbyterian Dallas, Baylor University Medical Center, and VA North Texas Health Care System. The turn-around point involved an orbit over the Dallas-Fort Worth National Cemetery, turning north back to Addison Airport for touchdown at around 12:30 p.m. The camera ship was the last to land, and Kevin and I waved at the onlookers still lining the taxiway as we made our way back to the museum.

At the flight debrief, the aircrews were jovial and there were no complaints. I stood off to the side, listening, and felt fortunate to have been able to participate and document the flyover from the backseat of one of the vintage warbirds. The ‘Salute to Heroes’ flyover was a success, and it was fitting that the flight took place during the Memorial Day weekend so that our veterans could be honored as well. Even though this ‘salute’ was flown over just one metropolis in Texas, a symbolic ‘thank you’ and gesture of hope went out to all of our great nation during this difficult time.