On Friday, October 1st, 2021, the Air Force Academy Foundation inaugurated the Air Warrior Combat Memorial (AWCM) at the approach to the north entrance of the United States Air Force Academy near Colorado Springs, Colorado. The ceremony took place in the presence of graduates from earlier classes as well as Christina Olds and Jennifer Newman, daughter and granddaughter of the legendary fighter pilot and combat leader, General Robin Olds and . The dedication ceremony lasted approximately 30 minutes.

This memorial was made possible by the Academy’s Class of 1971, with assistance from the Classes of 1963 and 1969 as well as other donors. The AWCM is located beside the retired Boeing B-52D Stratofortress 55-0083 Diamond Lil, which is dramatically displayed atop a set of plinths at the corner where North Gate Boulevard meets Stadium Boulevard.

As their class gift, the United States Air Force Academy’s Class of 1971 voted at their 40th reunion in 2011 to create a memorial at the USAFA to honor all of their brethren who have flown in harm’s way and those who support them. Furthermore, to memorialize the first 100 years of aerial combat, the Class selected the charismatic Brig. Gen. Robin Olds to represent all air warriors, citing his outstanding example of courage, skill, and leadership. Over the past ten years, the Class of 1971 has raised money to construct the Air Warrior Memorial right inside the North Gate entrance to the Academy. A decade of planning and obtaining the correct permissions has resulted in a stunning life-size bronze statue by renowned sculptor James Nance which depicts Robin Olds in a flight suit at the peak of his combat career during the Vietnam War – and of course he is sporting his famous, full mustache. Rather fittingly, the sculptor James Nance is also a member of the Air Force Academy’s graduating Class of 1971. 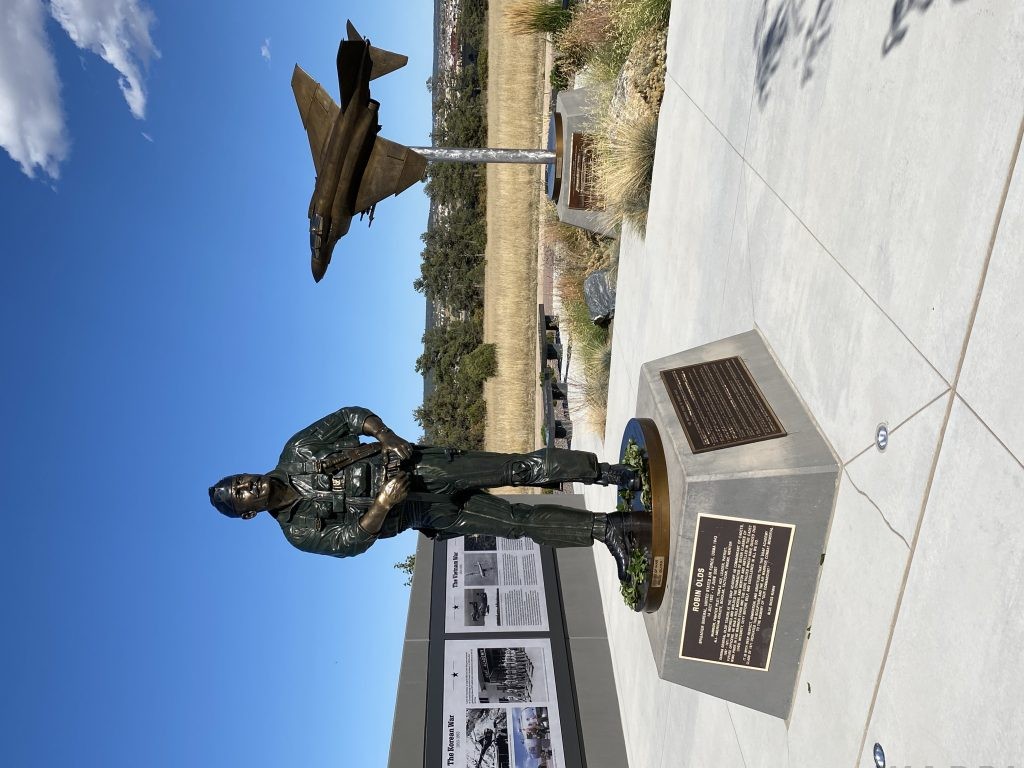 There were a number of reasons why the Class of 1971 selected Brigadier General Olds to represent the Academy’s warrior ethos. Firstly, he was a triple ace, with thirteen aerial victories in WWII and a further four over Vietnam. Secondly, he was the US Air Force equivalent to the Navy’s Revolutionary War hero, John Paul Jones – Olds was an exceptional, lead-from-the-front, Combat Wing commander in Vietnam. His men idolized him, and would “follow him to hell and back” – and often did. Finally, he was the US Air Force Academy’s beloved and admired Commandant of Cadets to the Class of 1971 during all four years of their attendance.

Regarding the Memorial’s dedication ceremony, Christina Olds said: “It was an incredible ceremony honoring my dad and the installation of his statue in the new Air Warrior Memorial at the U.S. Air Force Academy. I thought it was very special that they picked Robin Olds to represents the spirit of the Air Warrior. I love that that the position of the statue is facing south, where the best sunlight will illuminate the face of my dad, almost bringing the sculpture to life. It was a special weekend indeed.”