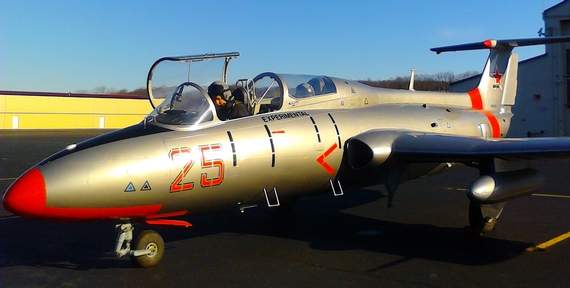 High hangar fees have sent Jon Sokolof in search of less expensive accommodations for his Aero Vodochody L-29 Delphin (Dolphin). He’s found hangar rental to be significantly less expensive in Pennsylvania’s Pocono Mountains compared to the Delaware air field he had been using to store the Eastern Bloc trainer jet and so the plane recently left the coast and headed to its new digs inland.

The Aero Vodochody L-29 Delphin entered production in 1963 after a series of prototypes beat competing models from Russia and Poland in a Soviet Air Force competition for a next-generation Jet trainer to replace piston-driven models that had been n use up to that time. The L-29 went on to become the standard jet trainer for the entire Warsaw Pact, with the exception of Poland which chose to go it alone and continue to develop it’s losing entry to the competition, the PZL TS-11 Iskra (Spark).

As a plane designed to be easy-to-build and maintain, simplicity and ruggedness were stressed with manual flight controls, large flaps and the incorporation of perforated airbrakes on the fuselage sides providing stable and docile flight characteristics, leading to an enviable safety record for the type. The sturdy L-29 was able to operate from grass, sand or unprepared fields. These design characteristics built into the plane from the start have made for a compelling jet for private civilian use compared to more sophisticated, delicate and prohibitively expensive to maintain jet warbirds. The collapse of the Soviet Union abetted these planes falling into civilian hands as the republics left in the wake of the collapse found themselves unwilling and unable to support the bloated military apparatus left behind and equipment deemed unnecessary flooded the market at fire sale prices. This particular plane, built in the 70s was one of 15 imported in crates by Aero Vodochody Specialists, Air Investment Services of Blaine, Minnesota. Sokolof purchased the jet for $40,000.00 and enjoys flying it to air shows and EAA events in the Northeast.