Italian product quality, care for details and craftsmanship are known worldwide. All of these attributes were applied into the development of a one-of-a-kind line of garments.  Squadratlantica is the vision of Davide Pizzolato, an Italian entrepreneur with a passion for aviation. The name of the company evokes Italo Balbo’s mighty transatlantic flights before WWII.

The result is Squadratlantica; a line of military-inspired apparel with a distinctly vintage style. The prerogatives are quality driven by the finest of details, down to the last ribbon in the embroidery, and all certified “Made in Italy”.

As most of our readers here will know, Jimmy Doolittle achieved immortality on April 18th, 1942 by leading sixteen B-25 Mitchells off the carrier Hornet in the first air raid on Tokyo, Japan. However, many won’t know that Doolittle was already a household name decades before that day. He first shot to fame on a windy day in the fall of 1925 at Bay Shore Park in Baltimore, Maryland. There the young Lt. Jimmy Doolittle took his blazingly fast Curtiss R3C-2 seaplane to victory in the Schneider Trophy at a speed of 232.17 mph (374 kmh). Inspired by this event, Squadratlantica has created the Squadratlantica SA005 polo shirt which depicts Lt.Doolittle in front of his Curtiss race plane. 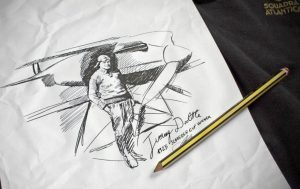 With the intent of making a quality, historically accurate product, Squadratlantica delved deeply into the archives to get the details right. Starting with the Schneider Trophy library collected by the Squadratlantica Historic Archive, they analyzed the 1925 race and found that it took place on October 26th that year, rather than two days earlier as originally planned due to high winds. Also, by closely studying the livery of Doolittle’s plane, they were also able to pin point those graphic features that could be replicated on a garment. Among the most significant were the national insignia cockade with the star & the red circle and the US ARMY writing painted on the rudder of the plane which indicated that Jimmy Doolittle was in reality a pilot of the US Army, even though he was flying a Navy aircraft. Squadratlantica finally chose the most symbolic photo (which was not actuality taken during the race!) with Jimmy Doolittle proudly posing in front of his “racing horse”.

Squadratlantica makes original, made-in-Italy, high-quality, limited-editioned products. Every project, based on documented historical events, is intended for all those throughout the world who are passionate about aviation and want to celebrate their aviation heroes with a finely crafted, durable piece of clothing. This is no ordinary shirt either, and of the finest quality, and as such it comes with a commensurately significant price, but it is sure to be a head-turner, and far cooler and better made than any of those over-priced “authentic” sports team jerseys.

Also, Squadratlantica donates part of its profits to support the preservation, restoration, and the flying activity of historical aircraft. 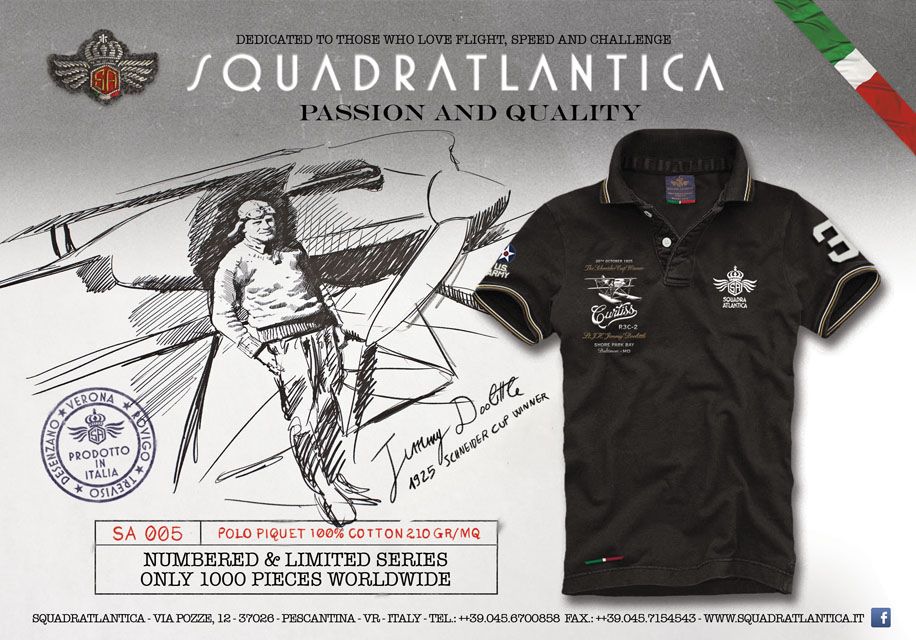