The Ling-Temco-Vought (LTV) A-7 was officially known as the Corsair II, but it was actually the third Vought aircraft to wear that name.  The first was the O2U scout and observation biplane that first flew in 1926.  The second was obviously the F4U, which was quite arguably the most famous fighter of the Second World War.  The development of the A-7 began in 1963, when the Navy issued the requirements for a replacement to the Douglas A-4 Skyhawk.  In order to keep development costs down, designs submitted by had to be based on existing designs, and LTV chose to base the A-7 on its highly successful F-8 Crusader.

The A-7 first took the skies on September 26, 1965, and entered service with the U.S. Navy in February 1967. Within the next four years, a total of 27 U.S. Navy attack squadrons were flying the A-7.  With the war in Southeast Asia still going on Navy Corsairs were soon in combat.  By the end of the war a total of 98 Corsair IIs were lost in combat.  The type flew its final combat missions nearly three decades later in the skies over Kuwait and Iraq during Operation Desert Storm.  In between Navy Corsair IIs drew blood in operations over Grenada, Panama, and Libya.  Shortly after Desert Storm both the USN and USAF retired the A-7 from active service, although it soldiered on with the Air National Guard for two more years.  The A-7 was only exported to three countries, Greece (commencing in 1975), Portugal (1981), and Thailand (1995).  Greece was the last of these countries to retire their Corsair IIs, doing so in October of 2014.

When a proven combat aircraft serves on the front lines for six decades it is bound to develop a loyal following, which often leads to organizations that become a repository for anything related to a particular aircraft type and there is just such an organization dedicated to the LTV A-7 Corsair II…The A-7 Corsair II Association, Inc.  The mission of this organization, which currently numbers over 500 and is growing weekly, is to document the history of the A-7 itself, honor those who flew and maintained it, to be a repository and guardian of the extensive Corsair II legacy, and to facilitate contact among former members of the A-7 community.  As a non-profit corporation, the goals are to contribute to select philanthropic organizations, which support the mission and to assist the many aircraft carrier and land museums regarding the display and history of the A-7. A major focus is to provide funds and expertise toward encouraging the education of America’s youth in science, mathematics, critical thinking, and how the A-7 played a part in the history of Naval, Air Force and Air National Guard Aviation.

There are two levels of membership within the association; Member and Associate Member.  The Member level is open to all aviators who have flown an A-7 in the capacity of pilot-in-command, as well as all former officer and enlisted personnel who, at any time, served a tour of duty in a squadron which flew the A-7 Corsair II. Membership is also open to any persons who have served in a capacity of providing direct support to an A-7 squadron (e.g., civilians providing contractor services to the squadron at their home base, or while deployed). Associate Membership is granted to corporations or otherwise ineligible persons who are sponsored by a Member, and are accepted by the Board of Directors. Associate Members enjoys all membership benefits except for voting privileges. 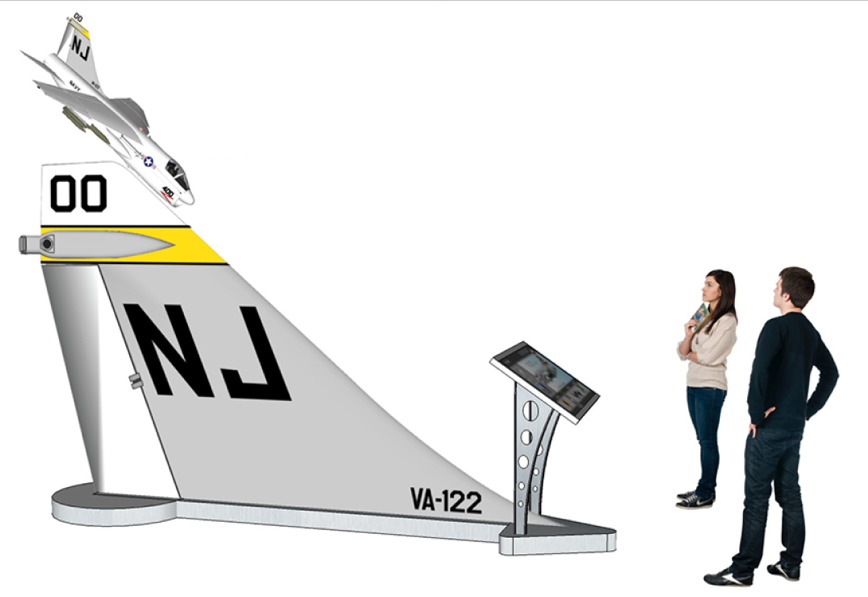 In the short three years that association has been an existence, it has accomplished a number of important tasks including providing scholarships to the National Flight Academy to deserving students, hosting a number of yearly reunions across the nation, assisting museums around the world in the preservation and restoration of their A-7s, and continue amassing of an A-7 archive that includes not only private donations, but those from Vought itself via the Vought Retirees Group.

The Association is currently conducting a fund raising campaign so an interactive kiosk can be installed next to the A-7E that is on display at the National Naval Aviation Museum in Pensacola, Florida. It’s a striking piece, consisting of an authentic A-7 vertical stabilizer that features a large, interactive touch screen display that will allow people to learn more about the history of the aircraft, the squadrons that operated them and the people who flew and maintained them. Long-term plans also call for us to develop and install one at the National Museum of the U.S. Air Force in Dayton, Ohio.

The Association is a 501(c)(3) corporation, so the kiosk is being funded solely through the donations of Members, and those of interested individuals.  No membership dues are going into this effort, and all donations are tax-deductible.  The Association’s Federal Employee Identification Number is 46-1898724.

To learn more about The A-7 Association, go to www.corsair2.us. For more information about the kiosk, and for questions about the Association itself, please email a7corsairiiassociation@gmail.com.