The Fagen Fighters WWII Museum held their annual Ray Fagen Memorial Airshow at their home field in Granite Falls, Minnesota on Saturday, June 18th, 2022. I arrived mid-afternoon the day before, and was treated to several practice flybys, most notably by Fagen Fighters’ newest acquisition, a Mitsubishi A6M3 Zero. The collection’s recently restored, award-winning Grumman F6F Hellcat also took to the skies – chasing the Zero around a bit. The Wings of the North air museum brought their TBM Avenger over for some flybys during this time as well. After these aircraft landed, a replica P-36 Hawk and Zero (created for the 1970 film Tora! Tora! Tora!) took off to practice their dogfighting routine. Fagen Fighters’ desert-schemed Curtiss Kittyhawk Mk.I  joined them as well. Later in the evening, we were treated to some beautiful flybys from Fagen Fighters’ P-51D Mustangs Sweet Revenge and Twilight Tear. These two stunning beauties made for some gorgeous evening photos. 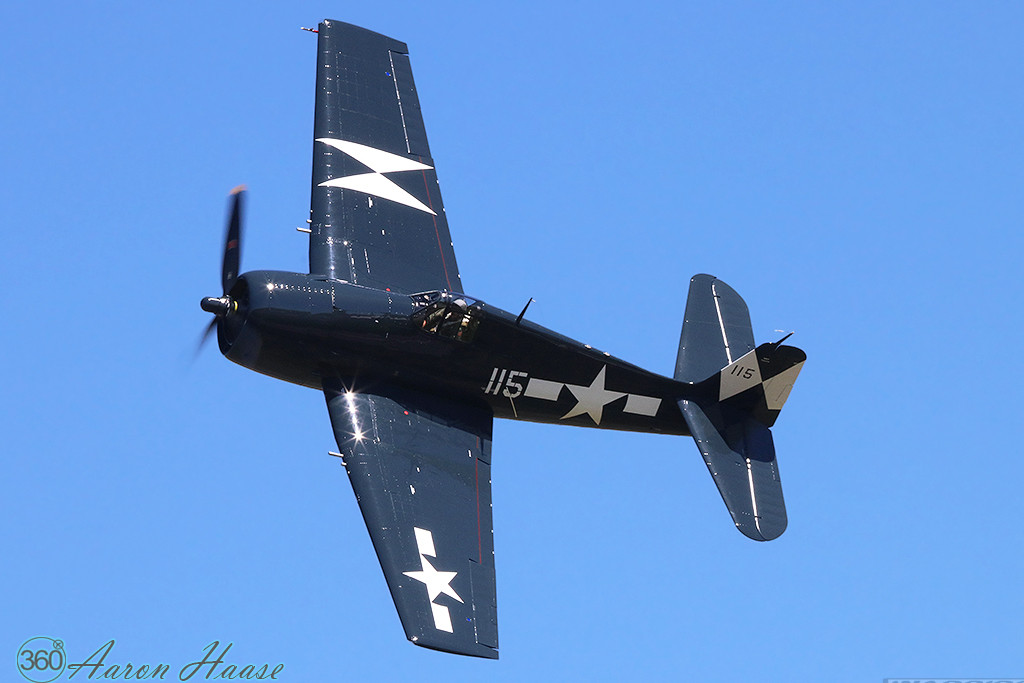 The air show on the following day was sadly too windy to allow the parachute jumpers to perform as the opening act. Instead, Evan Fagen hopped into the collection’s Grumman FM-2 Wildcat and performed a splendid aerobatic routine. The primary trainers and an Erco Ercoupe were the next aircraft in the air. They did a couple of nice, low passes before recovering to land. After the trainers finished, Bernie Vasquez took off in the Dakota Territory Air Museum’s Hawker Hurricane Mk.XII. This was the first time I’d seen an aerobatic demonstration in this type of aircraft. Bernie really showed off its exceptional maneuverability and proved why it was able to hold the front lines during the Battle of Britain. Next up was a flight of four Vultee BT’s and one North American T-6 Texan. 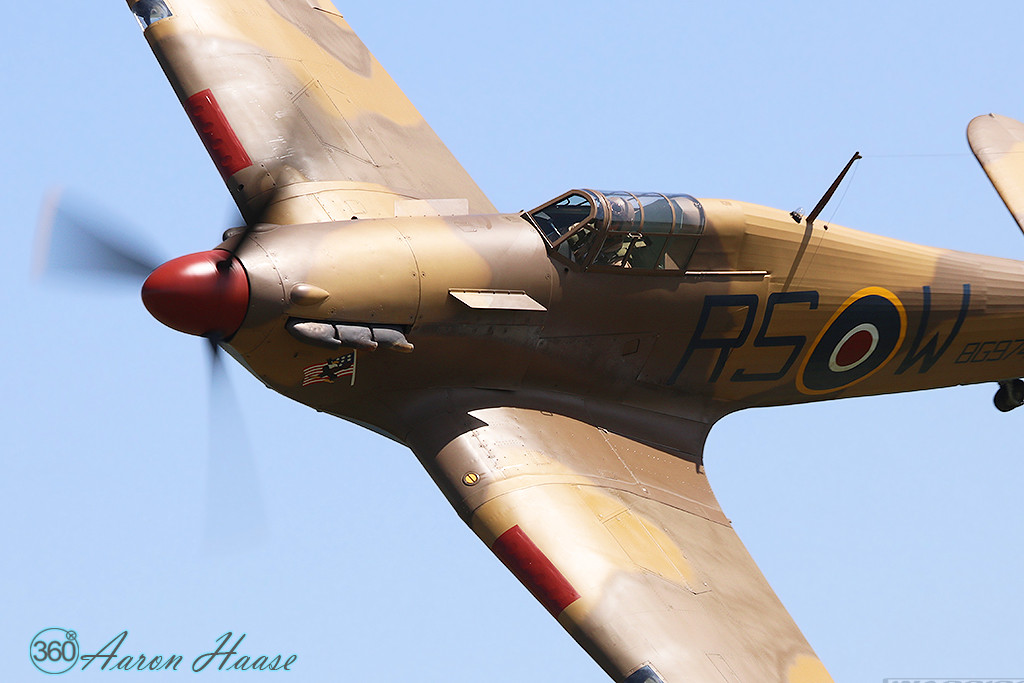 Three of the BT’s flew a nice ‘Vic’ formation for their passes while a fourth made solo passes, as did the T-6. After they recovered, Bernie Vasquez once again took to the air, this time flying the Dakota Territory Air Museum’s Supermarine Spitfire Mk.IXc. He flew another wonderful aerobatics routine in this famous British fighter. The World War Two bombers were up next; two B-25 Mitchells and a PBY Catalina made a few passes, with pyro exploding on the ground to simulate their attack. The Mitchells included Fagen Fighters’ B-25J Paper Doll and  Pat Harker’s B-25 Lady Luck, while John O’Connor supplied the PBY Catalina (actually a Canadian-built PBV-1A Canso). Once the bombers landed, the USAAF fighters took off to begin their flybys.

Fagen Fighters’ P-38L Lightning Scat III and P-51D Mustang Sweet Revenge performed several flybys which included simulated strafing and bomb pyro runs. Once the P-38 landed, Ray Fowler performed a marvelous aerobatic routine in the Mustang. Following Ray, Matt Younkin put his exquisite Beech 18 through a magical routine.  The control and precision which he showcases is second to none in this aircraft. The Pacific-themed portion of the show rounded out the day. First up was a flight of four United States Navy aircraft including Fagen Fighters’ F6F Hellcat and FM-2 Wildcat alongside Wings of the North’s F4U-4 Corsair and TBM Avenger. They made several passes accompanied by the thump and flash of simulated strafe and bombing run pyrotechnics on the ground. After these passes, the Hellcat, Wildcat and Corsair joined with a Mustang for a ‘missing man’ formation.

Perhaps the most emotional part of any airshow, this missing man routine was flown by some of the most heralded warbird pilots in the community: Evan Fagen in the Hellcat, Bernie Vasquez in the Wildcat, Doug Rozendaal in the Corsair, and Ray Fowler in the Mustang. Ray pulled up and away from the formation to complete the missing man. Once all these fighters returned safely to earth, an alarm sounded, and suddenly, the field was under attack by six aircraft sporting red circles on their wings… the Commemorative Air Force’s Tora Tora Tora performance had begun! 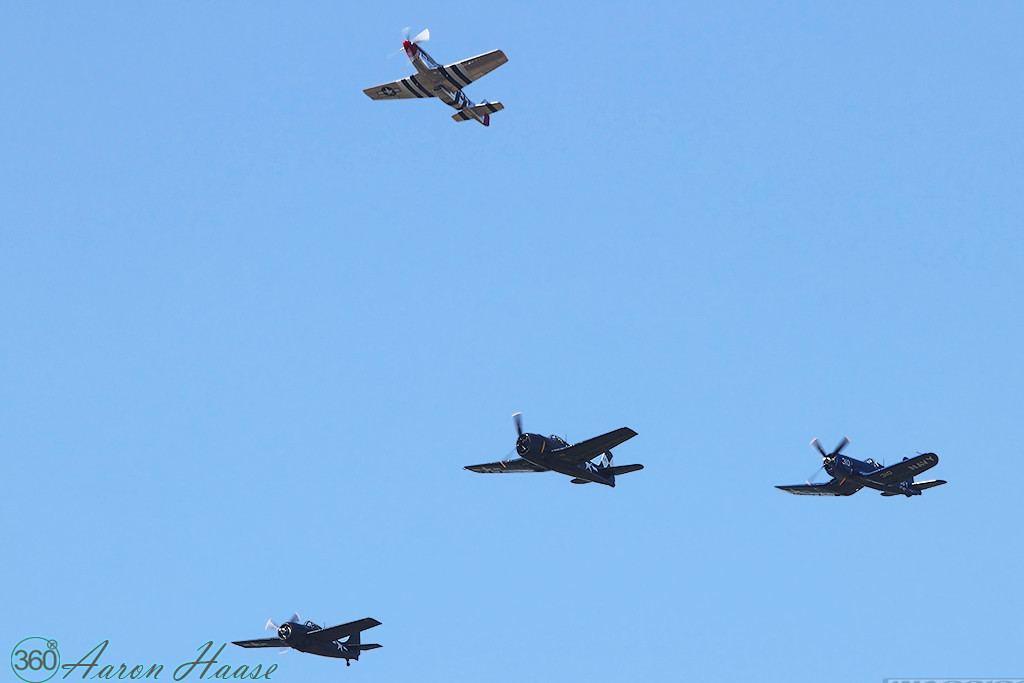 Replica Zero fighters and Kate torpedo bombers attacked the field. Our heroes took off to defend the skies in a replica P-36 Hawk and Fagen Fighters’ P-40K Warhawk. The crowd was treated to one final attack to signify the end of the show – the Tora Bomb Squad’s Wall of Fire. Even so, the flying event was not quite done for the day as Matt Younkin performed his award-winning nighttime routine in his Beech which concluded with an incredible 1500-foot long Wall of Fire (compliments again of the Tora Bomb Squad) as soon as Matt turned his lights off. What a surprise that was!

If you are a warbird fan and could not attend, I recommend you make a date for this event next year!  It is a small venue, close to the runway, where you can really see and hear these wonderful aircraft fly. Huge kudos must go to all of the staff, volunteers, and performers for all of their hard work and dedication in putting on such a magnificent show!