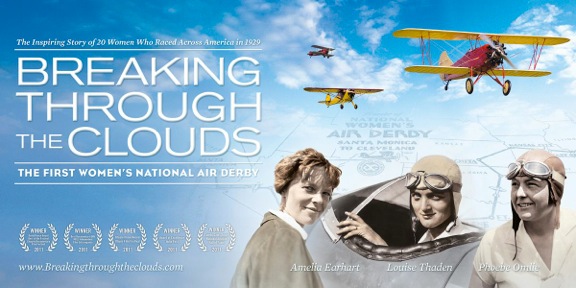 Docs in Progress, a non-profit a supportive community for documentary filmmakers, has awarded Archetypal Images, LLC a “Decade of Docs” award in the “Women in Docs” category. Archtypal Images won the award for their documentary Breaking Through the Clouds: The First Women’s National Air Derby, and also received a nomination in the Historical Documentary category. The film adds the “Decade of Docs” award to more than a dozen others it’s captured including the prestigious “Combs Gates Award” from the National Aviation Hall of Fame; “Best of the Festival” at the Chagrin Film Festival; “Best Documentary” at the Reel Independent Film Extravaganza; and the “Gold Peer Award” for Best Documentary from TIVA (Television, Internet, Video Association), among others.

Breaking Through The Clouds tells the true story of twenty women, including Amelia Earhart, who raced across the sky in 1929 to prove flying was viable, and that women could indeed fly. This June marks the 85th anniversary of that air race. More information is available at BreakingThroughTheClouds.com. “We first met filmmaker Heather Taylor when she was still editing the film,” said Erica Ginsberg, Executive Director of Docs In Progress, “and it has been amazing not only to see her complete the film, but tell an important story about a group of courageous women.”

“To be recognized so highly by an organization that fosters and encourages so many artists to share incredible stories with the world is truly an honor,” says Heather Taylor, executive producer of Archetypal Images, LLC. Docs in Progress is a non-profit organization that supports and fosters documentary films which educate, inspire, and transform the way people view their world. They have been in operation since 2004, and are supported by the National Endowment for the Arts. The organization offers work-in-progress screenings, consultations, professional development workshops, and opportunities to connect with other filmmakers.  Learn more at www.docsinprogress.org, or by calling 301-789-2797.