In mid-October, the Warbirds of Glory Museum moved in to their new premises at Oakland Southwest Airport near New Hudson, Michigan. As most readers will be well aware, this museum is responsible for rescuing the battered remains of B-25J Mitchell 44-30733 from a sandbar in the Alaskan hinterlands during 2013 where the aircraft had lain since a 1969 forced landing while serving as a civilian fire bomber. The museum has made great strides in restoring the aircraft, now dubbed the Sandbar Mitchell, since those early days, all while leading an apprenticeship program to train high school students in the art of aviation restoration/manufacturing. We recently caught up with Patrick Mihalek, who cofounded the Warbirds of Glory Museum with his friend Todd Trainor, to discuss the recent move and to learn about continuing progress with the B-25’s restoration. Our very own Moreno Aguiari performed the interview…

Mo: “It’s good to talk with you again Patrick! Could you talk a little about what prompted your move?”

PM: “Well, the museum… has just grown [a lot] over the years… We started off… basically at the Brighton Airport.”

“Most museums have a benefactor, [but] we didn’t. We just came up with the dream – the idea – and recovered Sandbar. [We] started doing the fundraising, started building the organization, and we just got to that point where we outgrew our [previous] facility. Our current lease at the Brighton Hangar was coming to an end, and the opportunity arose to basically double our space, so we decided to make the move, which is only about 15 miles from where we were [then located]. But… we went from about 4,500 square feet to nearly 8,500 square feet [of hangar space].”

Mo: “Perfect! Besides the extra space, what does the new facility give you which you didn’t have before?”

PM: “The big thing was being at the Brighton Airport, [which] is actually zoned as residential, so we’re very grateful that the township worked with us and allowed us to operate the non-profit out of our old hangar at the Brighton Airport because we were doing airport-related aircraft activities… That zoning [meant that] visitation was by appointment only. We couldn’t have big events. We couldn’t have a posted address or hours… that kind of stuff. Whereas with our new hangar being commercial – now we can actually have a posted address. We can actually have hours where it’s open to the public. We can have fly-ins, events. One of the big things with our student program now – we can actually start partnering and working with the schools, instead of having it just be like a word of mouth… where one student would say something to his friend and bring his friend in. It allows a lot more opportunities and expansion of the organization.”

Mo: “Awesome! What made the move possible?”

PM: “What made the move possible was really our museum members and folks that supported our organization and believed in us. Oakland County, because we were in Livingston County, now we’re in Oakland County. The airport board was just fantastic… they got behind us 100% and worked with us to get us at Oakland Southwest. And then the membership – everybody stepped up with donations to help with the cost of the move, because we had to renovate the hangar. The hangar needed a lot of work to get it to where it’s at now, to basically make it a functioning museum… we’ve still got work to do on it. We’ve still got to finish the electrical for all the big machining equipment, and we are still trying to raise the money that’s necessary – or find a company that’s willing to get us a paint booth. That’s the last big thing that we need… the paint booth to finish the shop.”

Mo: “Gotcha. What was involved with the move, and how long did it take?”

PM: “We basically moved the museum in two stages. The first stage was the storage hangar… We have our main restoration shop museum at New Hudson, and then the next row over from our hangar is basically our storage hangar, which is like a 40′ by 80′. Basically, it took a weekend and a couple days to move the storage hangar. I think the storage hangar was a lot more work actually to move… from Brighton to New Hudson. And then… on October 15th, 16th, a Saturday and a Sunday, we had about 30 volunteers come in. And Pratt & Miller – which is a big company in Automation Alley down here – they brought out a 40 foot, really nice enclosed trailer that they actually use for the race cars and stuff, and they moved the spar benches for us with the wings spars. I mean, we basically had everything wrapped up by the Sunday evening!”

Mo: “That’s amazing! You must be thrilled that it went so quickly.”

Mo: “On another note… We heard over the summer that you were working on a collaborative effort with Volatus Infrastructure. Are you able to reveal further details about their sponsorship and involvement with your program yet?”

PM: “Not at the moment. We’re still waiting for everything to be finalized… What I can say is that what was announced on Facebook is that Grant [Fisk], the cofounder of Volatus (we met him at Oshkosh – he actually visited our booth multiple times) … heard what we’re doing, saw what we’re doing, fell in love with our program, and… chose to sponsor us as one of their charities. We’re still in talks to see what that all is going to entail, but we’re hoping that other companies like Grant’s will want to get on board with our student programs and the restoration of the airplane.”

Mo: “Perfect. Are you still working with the high school apprenticeship program?”

PM: “Absolutely… Right now we have about five students currently. [Although] obviously, COVID basically stopped everything [for a while]… And after COVID, we started having new students come in. Now, we still have all of our old students. All of our original students that were part of the project, they’re still coming over and even some of the students – I would say the second wave of students – are still coming over. But as for new students that are getting involved, [there are] about five right now, and we actually have a list of others that are interested in getting involved once we actually get back up into operating… We hope to be up and  fully operational by the end of the year.”

Mo: “Awesome! Roughly how many students have you worked with since you began that initiative?”

Mo: “That is incredible… I imagine some of them must have gone on to careers in aviation, either with warbirds or aerospace in general. Do you have any idea how many made that transition?”

PM: “And they’ve gone… into the military, they’ve gone into aviation flight science, aviation management, aviation maintenance. Caitlin – I always bring Caitlin up, because she’s a great story… She was involved in cars, [then] spent two weeks with us, fell in love with aviation, and now she’s just actually finishing up her A&P. She’s actually studying to take her test I think within the next week!”

Mo: “That is great to hear!… All right. Let’s switch gears now and talk a bit about the Sandbar Mitchell, the B-25. What aspects of the B-25 have you been working on recently?”

PM: “The main thing right now is we’ve been finishing up the center section. At Oshkosh we actually had a pretty neat display this past year. We brought basically the whole internal right hand side structure that’s finished.”

“The left side is ready to go together now, so it’s just going to be… painting and assembling. Then, once that’s done, we can actually bring the spars and everything together and have that internal structure done. Progress is still being made on the top with the forward fuselage. Progress is being made on the eight foot section of the rear fuselage. Once those assemblies are done, we’ll start taking more things apart.

But… the big thing is now, at the new location, we can expand our volunteer base too. Where we are now located is actually considered Automation Alley… there’s a lot of cool stuff down there. A lot of the people that have supported us in the past, like Exotic Seals, who help with the tail turret, they literally are 10 minutes away from us now. Pratt & Miller… is there and a lot of guys from Pratt & Miller have been coming over and expressing interest in getting involved.

Some of the other big things is there’s actually JKL Machinery down the street from us. I’m not going to say 100% yet what’s going to happen, but… there’s going to be a really exciting piece of machining equipment being put in the new hangar here in the next couple of weeks, which is going to change a lot for us, because some of the stuff that we [once] had to outsource… we won’t have to do [that any] more because we will have that equipment now in the shop.”

Mo: “Great. That’s great. Have you acquired any new components for the B-25 over the past year? And if so, what were the most important parts?”

PM: “Over the past year we basically haven’t gone actually searching for parts… [however] we had two large collections of radio gear donated to the museum from collectors. And from that we were able to pull out almost a complete set of the correct radios and everything for the airplane, and then use the other stuff as a fundraiser to be able to acquire the other little bits and pieces. But really, when it comes to the airplane, it’s just been buying sheet aluminum and extrusions and that kind of stuff that we need to continue assembly.”

Mo: “Perfect! Just last question… Recently you mentioned that you were also working on the restoration of a North American Yale. Are the students working alongside you on that project?

PM: “The Yale is the completely separate project from the museum… [it] never has been part of Warbirds of Glory. That was always a side project I had. Some of my students, over summer, would come in and help me and assist on the Yale. The Yale is basically in the final stages right now… Over the next couple of weeks, [I will be] just finishing the last couple of bits and pieces that need to be done. It’s a lot of just finalizing… some wiring, installing the new wing attach angles on the wing, and some painting, and that’s really it. And then the airplane’s going to be moved over into our old storage hangar, and then next spring it will fly for the first time and fly off the necessary hours. It’s all up to the owner of the airplane whether or not he’s going to bring it to Oshkosh next year, but I hope he chooses to do that… It’s been a labor of love. There’s been a lot of ups and downs with the project, which has just caused it to [take] longer than it was supposed to be done… with engine issues and finding [other issues] like that. But other than that, it’s in the final stages of completion.”

And that’s all for now. It is amazing to see what progress Patrick Mihalek and his team have made in restoring the Sandbar Mitchell, but it is especially important to see what a positive impact this project has had in bringing new blood into vintage aviation. More museums should follow this route!

For those wishing to help the Warbirds of Glory Museum achieve their goals, please consider making a donation HERE. 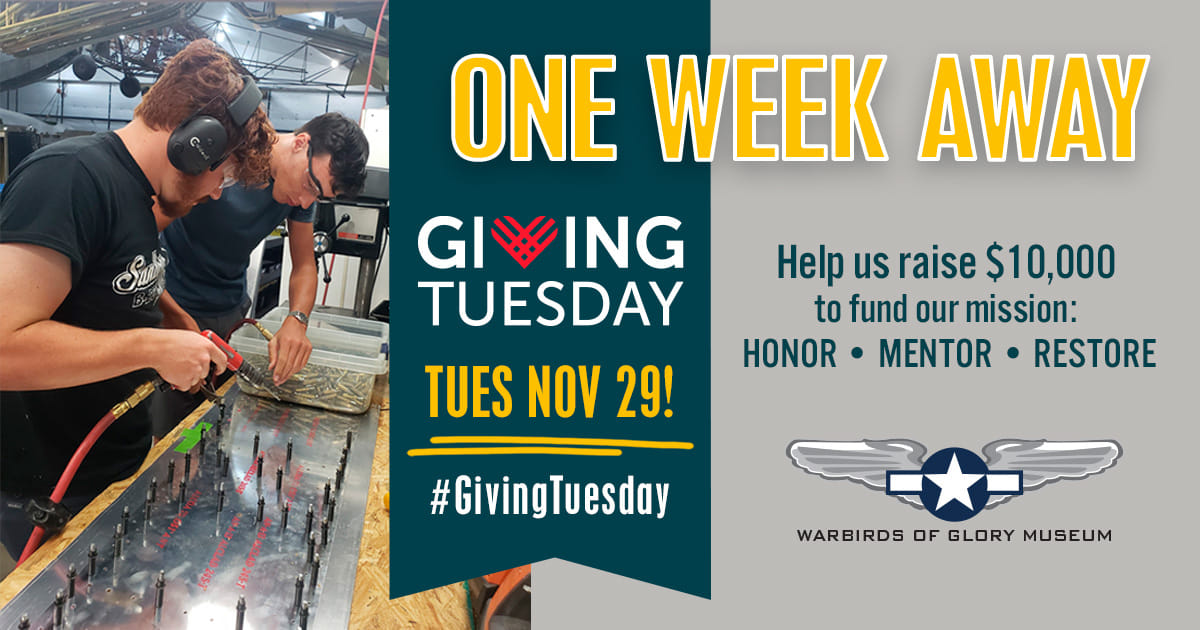