Warbird Adventures unveiled their newest acquisition to an unsuspecting crowd in Kissimmee, Florida today, a Curtiss P-40 Warhawk. With two seats, and a full set of dual controls, Warbird Adventures will offer their Warhawk to the public for  introductory flights, as well as transition flight training for those aspiring to gain experience flying a WWII single-engine fighter.

This aircraft is based upon the remains of P-40N 42-104977, a WWII combat veteran which then-1st Lt. Joel Dixon Thorvaldson flew over New Guinea with the 8th Fighter Squadron’s Blacksheep in the 49th Fighter Group, 5th Air Force. The P-40, which Thorvaldson named Punkins, in honor of his wife, also bore the name “Mr.Five by Five” on the engine cowling, perhaps because the aircraft’s squadron number was ’55’.  With three kills to her name, the Warhawk was herself shot down by a Japanese A6M Zero in combat over Tsili Tsili, near Finschafen, New Guinea on September 13th, 1943. The P-40 received hits to its engine, and caught fire. Thorvaldson belly-landed his stricken fighter in a field of dense kunai grass, surviving the incident, but he was still marooned in unfriendly territory. The kunai grass was so tall, that Thorvaldson couldn’t see which way to turn, so he used his flare gun to start a fire and burn a path through to a nearby river. A circling Allied aircraft saw the pilot by the river, and dropped  him an inflatable life raft which then allowed him to navigate his way to Australian forces over the next five days. Thorvaldson survived the war and stayed in the Air Force, making a career of it. He passed away in Virginia in 2014.

While Thorvaldson made it out, his burned out P-40 remained behind. Well-known Australian warbird recovery and restoration expert salvaged its remains in 2005. Fellow Australian, Mike Spaulding acquired the remains and incorporated what he could, as well as its identity into a project he had restored with Precision Aerospace in Wangaratta. The aircraft flew again for the first time at Mareeba on September 12, 2008, marked as an RAF example. Unfortunately, the P-40 suffered a gear collapse in August, 2008. Mike Spaulding sold the Warhawk to American John Davis in June, 2014, and the aircraft went back to Wangaratta for conversion to a dual control configuration. The fighter made its way to Davis’s home in Englewood, Colorado a year later, and flew again on May 10, 2016.

The Curtiss P-40N Warhawk is fully configured for dual-seat, dual-control, much like the original, factory-produced TP-40Ns were. P-40s are rare enough, but original TP-40s are even rarer, with only one of three survivors still fitted that way so far (Kermit Weeks TP-40N 44-47923). Of the handful of currently airworthy, dual-control P-40s, Warbird Adventure’s example will be the only one offering dual instruction on a commercial basis to the general public.

Warbird Adventures owner, Thom Richard stated: “We’re confident the addition of a dual-controlled P-40 will benefit the Warbird industry tremendously to increase safety in an otherwise mostly single-seat environment. I’ve toured various fighters on the airshow circuit for years and I can’t tell you how many people have come up to me and told me the P-40 is their absolute favorite aircraft and they would do anything to fly one. Well, we’ve decided to do something to fulfill that dream!”

Warbird Adventures has nicknamed their new dual-seat fighter American Dream, and she will make one of her first public performances be at the Florida International Air Show in Punta Gorda over October 19th-21st, 2018.
Warbird Adventures’s press release today stated…
The aircraft is now based at the Kissimmee Gateway Airport (KISM) and will be used in transition training to fighters, and touring as a fully aerobatic airshow act.  The mighty Warhawk will be available to fly for rated pilots and aspiring-pilots alike. Warbird Adventures is known worldwide for their first class T-6 training they have offered for over 20 years. They also house the Kissimmee Air Museum, which consists of a constantly changing collection of various aircraft and other aviation-related exhibits. The facility is open to the public 9-5, Monday through Saturday. 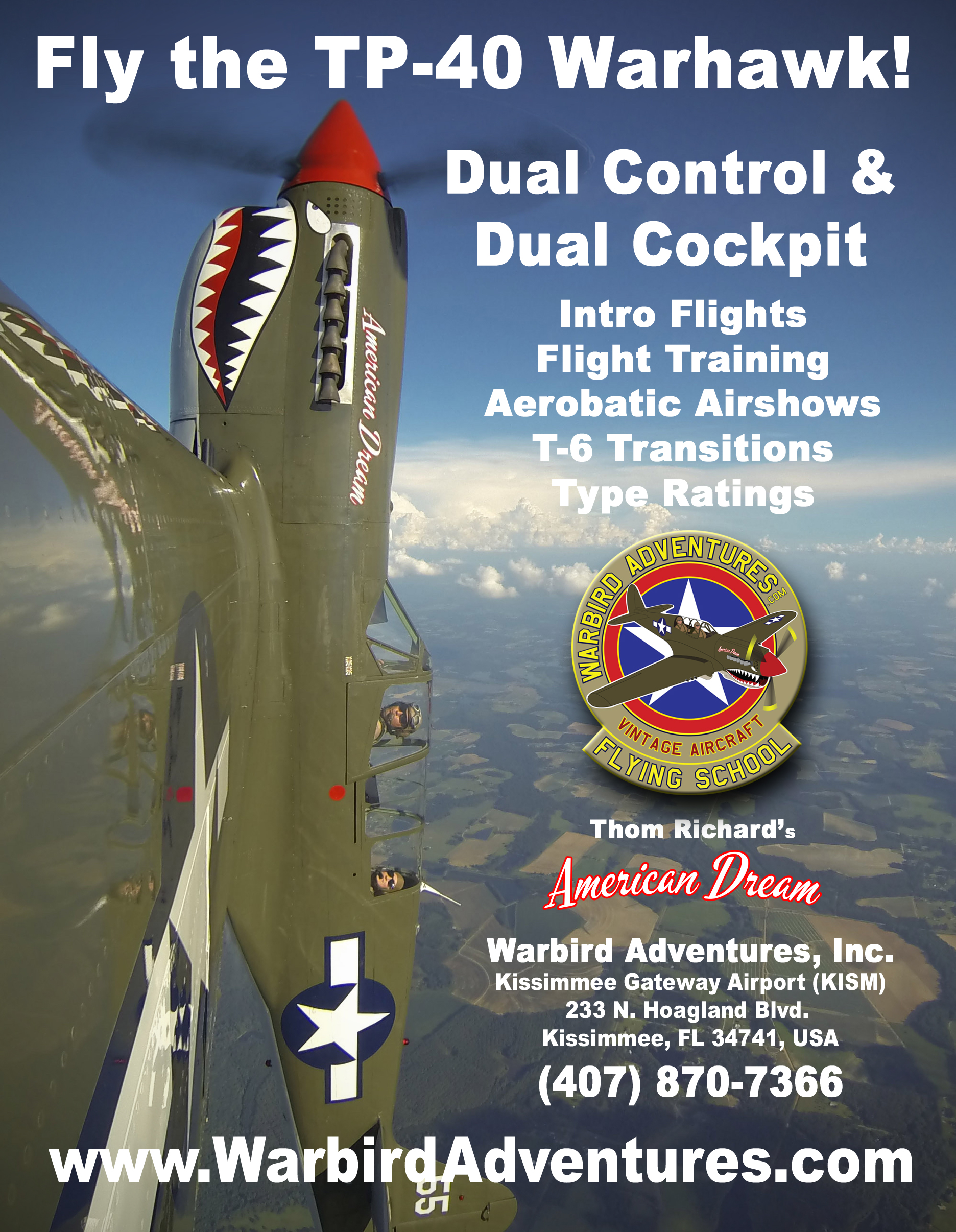