After catching up with Tony Mazzolini for an update a couple of weeks ago, yesterday we had the opportunity to talk with Scott Sarver.Scott is volunteer of ‘Doc’s Friends” ,the  group of business leaders from Wichita, KS which founded the organization  in early 2013 with a vision to see the historic Boeing B-29 Superfortress restored to flying condition.” Doc has all four engine nacelles installed, most of all the new cables have been installed or at least received and in the process of final installation.  Final wiring is being completed and we have received our new fuel cells. We have all four new engines (Hybrid -23/-95’s) and have done a test fit of the number one engine to confirm proper fit and clearance.  We have received our last two propellers from the rebuild shop and have them stored on new racks supplied by a sponsor.” Scott tells Warbirds News. 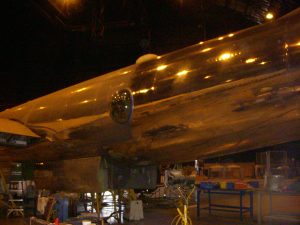