PRESS RELEASE – As work continues on returning a de Havilland DH.98 Mosquito to UK skies for the first time in a quarter of a century, The People’s Mosquito is offering supporters the opportunity to add their name to the story of the Wooden Wonder.

Through the charity’s restoration partners, Sussex-based Retrotec Ltd, rapid progress has been made towards the completion of the first de Havilland Mosquito fuselage moulds to be built in the UK for more than 70 years.

With the exciting launch of this fundraising initiative, The People’s Mosquito is offering five levels of exclusive rewards for supporters, ranging in value from as little as £25 up to £5,000. Each level of support offers its own unique rewards package, including from as little as £100 the opportunity to add your name – or that of a loved one – permanently to the mould itself. In doing so, supporters can physically add their name to the story of one of the most famous and versatile aircraft to emerge from the dark days of World War Two.

For those warbird and Mosquito enthusiasts able to do so, higher reward levels, starting at Gold level and £500, offer backers the chance to enjoy a visit to Retrotec’s facility and witness history coming alive as Mosquito FB.VI RL249 takes shape. 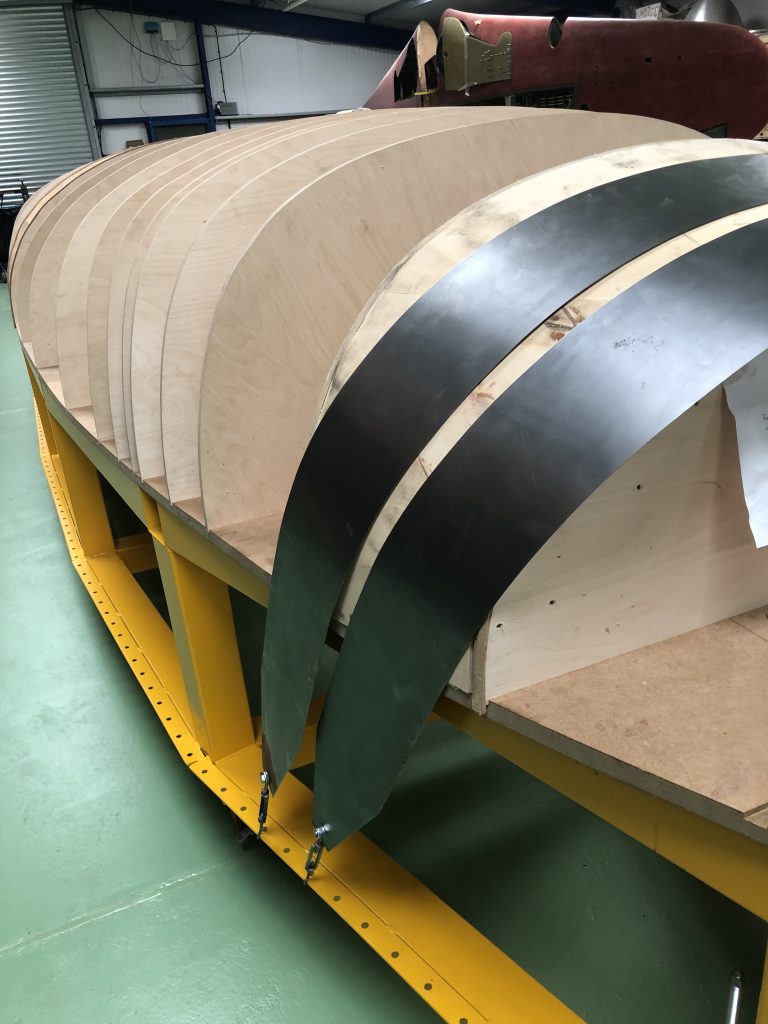 Elite Diamond and Platinum packages will see donors receive a VIP invitation to Retrotec to tour the facility, meet the team and personally sign their own mould infill, as work draws to its completion. And that’s not all. Diamond or Platinum backers will have the opportunity to join The People’s Mosquito and invited guests to witness the first public flight of a de Havilland Mosquito in the UK for well over 25 years, as well as receive a guided tour around the aircraft. Subject to all necessary and relevant permits, permissions and insurances to enable the carriage of fare-paying passengers, Platinum supporters will also gain priority access to a flight in The People’s Mosquito.

“As the country faces is toughest battle since the end of World War Two, efforts to return a Mossie to UK skies continue to gather pace, backed by British industry and public donations from all over the world,” said John Lilley, Managing Director of The People’s Mosquito. “During times of adversity, incredible stories often emerge – the Mosquito being one such example from our history. We’re incredibly excited to be writing the next chapter in that story. The drive towards returning RL249 to flight serves as a reminder, if one was needed, of what we can achieve when we come together.”

The aim of the campaign is to fully fund the completion of all 22 infills that constitute the pair of 11m-long fuselage moulds. The campaign target is to reach £250,000 by the end of summer 2020. Each complete mold will be used as the former over which the Mosquito’s unique composite wooden construction, featuring Canadian spruce, birch and balsa wood, is bound, glued and cured. The result is the lightweight, extremely strong airframe that underpinned the Mosquito’s famed war-winning performance.

The campaign, named Operation Jericho 2020 in honor of the famous February 1944 raid on Amiens prison, in which low level Mosquitoes breached the jailhouse walls to free French resistance fighters, aims to break down the final funding barrier for completion of the molds.

You can support the campaign at www.peoplesmosquito.org.uk/campaigns.