Supermarine Spitfire Mk.Vc JG891 took to the skies again in England for the first time in some years on July 6th, with a successful hop at Duxford Airfield in Cambridgeshire. Regular WarbirdsNews contributor George Land sent us some lovely photographs which we thought our readers might enjoy.

This aircraft rolled off Vickers-Supermarine’s satellite factory at Castle Bromwich at the end of 1942. Her first RAF posting was to 39 Maintenance Unit at RAF Colerne on January 2, 1943, moving on to 215 MU later that month at Locharbriggs in Scotland. There she was loaded aboard the SS Tijuca on February 4th for onward shipment to Australia along with a number of other Spitfires for service with the Royal Australian Air Force. After arrival in Australia in mid-April, 1943, she entered the RAAF as A58-178, passing through No.1 Aircraft Depot at RAAF Laverton, before joining her first operational unit, RAAF 79 Squadron, on on June 1st, 1943, coded ‘UP-G’. 79 Squadron formed up at Laverton, and began moving to the frontline base at Vivigani Airfield on Goodenough Island in New Guinea. The unit moved to Kiriwina, one of the Trobriand Islands now belonging to Papua New Guinea, during August, 1943. Kiriwina, at the time, was the closest Allied airfield to Japanese units then based at Rabaul. The Spitfire was involved in an accident at Kiriwina on December January 12th, 1944. While landing in gusty conditions without flaps on a wet summer’s day, F/Sgt Dudley Gringlington flipped the Spitfire on her back. While Gringlington suffered minor injuries, the Spitfire wasn’t quite so lucky, as the following images show…

No. 11 Repair & Salvage Unit assessed the aircraft with a view of returning her for service, but declared she was a write-off soon after, whereupon the stripped her for parts, and dumped the remains on site. Here the carcass lay for the next thirty years until Monty Armstrong recovered her remains, along with the wreckage of two other Spitfires on Kiriwina, shipping the remains to New Zealand.

Don Subritzky acquired the Spitfire in 1975 and began a restoration incorporating parts from another RAAF Spitfire, A58-149 (ex RAF EF545). Subritzky eventually sold the project to Karel Bos, who contracted his company Historic Flying Ltd. to carry out the restoration. JG891 was back in the air again on February 11th, 2006 for new owner, Tom Blair. The Spitfire flew in England for a couple of years before moving to the USA, along with the rest of Blair’s British fleet of Spitfires. Blair did not own her for long though, selling her to Dan and Tom Friedkin’s Comanche Fighters in the summer of 2009. The Friedkins had the aircraft modified into a clipped-wing variant and repainted her desert camouflage with a standard temperate scheme representing a Spitfire once flown by the legendary British ace, Robert Stanford Tuck. In July, 2017 JG891 suffered a slight mishap, departing the runway when landing in Marana, Arizona. Commanche Fighters subsequently de-registered the aircraft in the USA towards the end of 2017, and shipped her to England, where they registered her as G-LFVC. While at Duxford, the Spitfire has received a lot of TLC, and had her wingtips re-installed. A fresh coat of paint returns her to the desert markings representing JK879, a 249 Squadron aircraft flown from Malta by Flt Sgt John G. “Jack” Hughes (RCAF). She will be based in the UK for the foreseeable future, and is set to take part in the Flying Legends Air Show over the weekend of July 14th/15th at Duxford Airfield.

WarbirdsNews wishes to thank George Land for his marvelous images!

For those interested in the Supermarine Spitfire, issue #74 of Warbird Digest Magazine contains a in dept article about this ultimate WWII fighter. The Mk. IX Spitfire is widely considered amongst historians, and those that flew them, as the ultimate of the breed. Born out of necessity, and rushed into production, it was the right airplane, at the right time. Click on the cover to purchased this issue in print or digital. 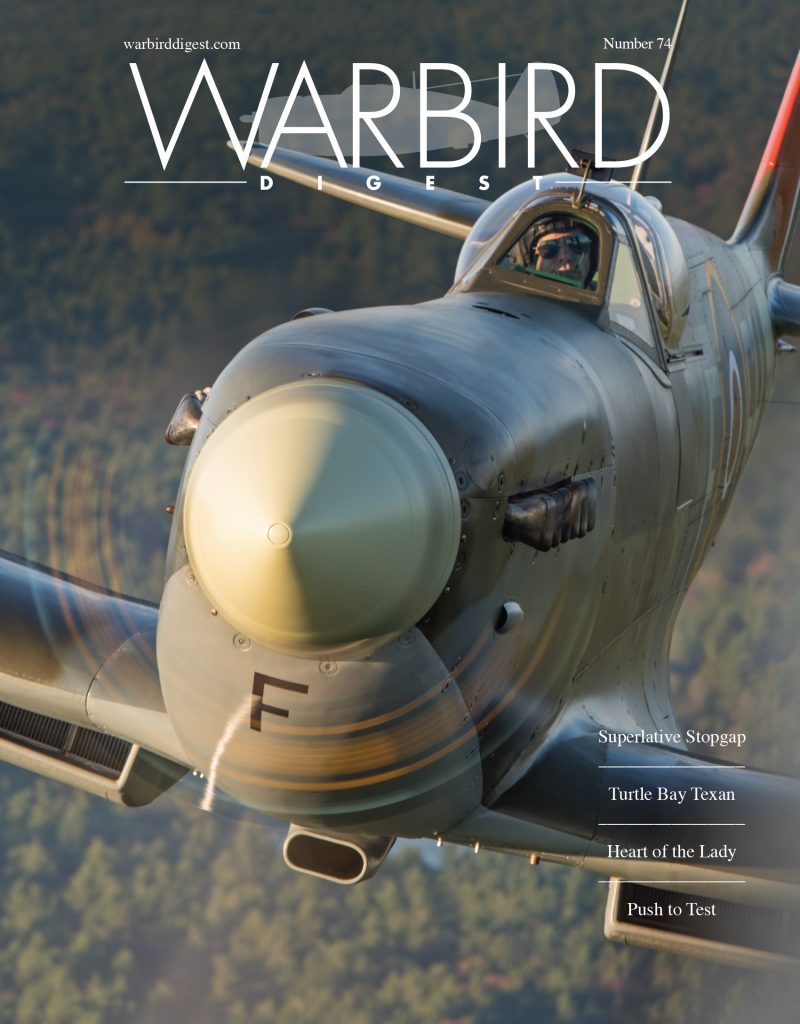