With much thanks to our good friend John Parker at WarbirdsOnline in Australia, we have learned that the Hunter Fighter Collection in Scone, New South Wales has made strong progress with the production of a replica Bristol F.2B, a WWI-era biplane combat aircraft better known as the Bristol Fighter, or ‘Brisfit’. We will let John’s words pick up the latest news as follows…

The Hunter Fighter Collection, curator of the Hunter Warbirds aircraft collection, has recently completed construction of an additional exhibit with significant importance to Scone and the Upper Hunter Region, in New South Wales. A replica Bristol F.2B will now feature in a diorama at their museum, which continues to grow impressively; new exhibits and aircraft being added at regular intervals.

The Bristol Fighter exhibit came to pass following the generous donation of a replica fuselage frame from Phillip Cooper in Queensland during 2021. Subsequently, the Hunter Fighter Collection commenced an initiative to build up a diorama entitled  “The Upper Hunter Battleplane”. The exhibit will show the replica F.2B, masquerading as an example (B1229) serving with No.1 Squadron, Australian Flying Corps (AFC) as it is undergoing reassembly at a location in Palestine during WWI.

The exhibit title derives from the WWI-era “Battleplane Fund” which Charles Alma Baker, a New Zealander, created to encourage Australians to contribute the sum of £2,700 to purchase an aircraft to serve with the AFC or Britain’s Royal Flying Corps (RFC). The Upper Hunter Region, which includes the town of Scone, contributed significantly, with its citizens providing funds for the construction of 12 combat aircraft in WWI.

One such donation from the people of the Upper Hunter funded the purchase of Bristol F.2B, serial number B1223, for No.1 Squadron AFC. B1223 served in the Middle East alongside several other aircraft donated by the Upper Hunter, including the famous B1229 flown by Sir Ross Smith. A replica of B1229 is currently flying at Scone with the Hunter Fighter Collection, so the two airframes will form a marvelous diorama together when the airworthy example isn’t on active display.

Matt Webber and the team at Luskintyre Aircraft Restoration took on the fuselage build-out, with assistance from the Upper Hunter Shire Council, Pays Aviation and Vintage Fighter Restorations. Luskintyre Aircraft Restoration was meticulous in their efforts, producing work of exceptional quality. The replica fuselage is now complete with its tail and markings as well as center sections and undercarriage. Over time, HFC volunteers will complete the remainder, which will include an engine, cowlings and Scarf ring for the rudimentary gunners turret.

The diorama will be installed at Hunter Warbirds shortly, and it will be a wonderful tribute to No.1 Squadron AFC as well as the citizens of the Hunter valley who supported them. It will be well worth a visit to see this new display! 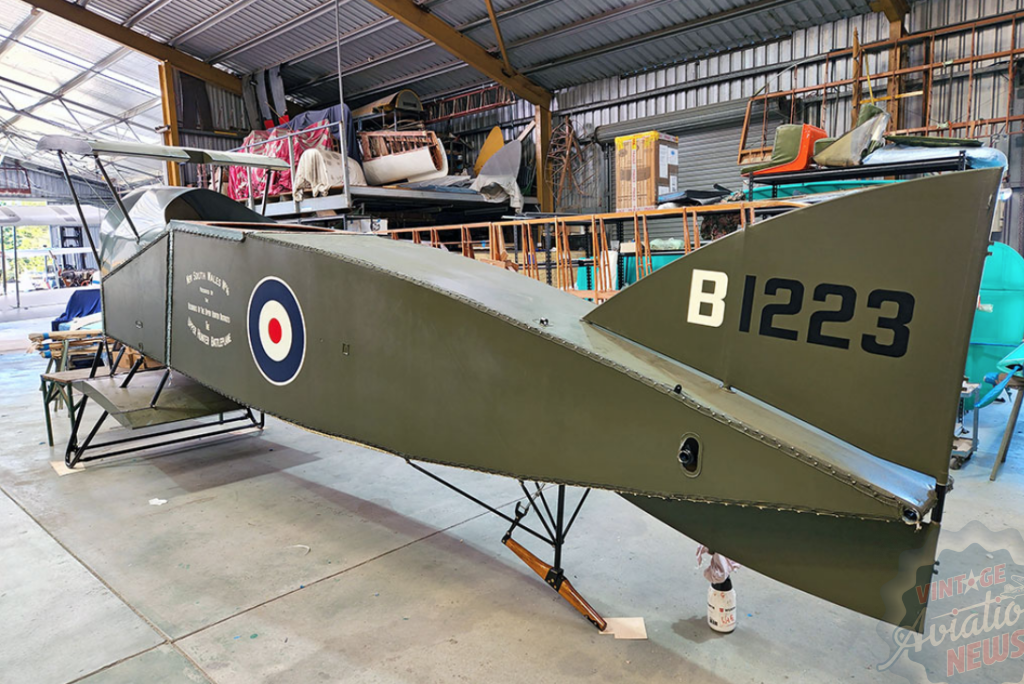 Many thanks indeed to our friend John Parker at WarbirdsOnline for this article. We look forwards to being able to report on progress as the diorama comes together.