by Adam Estes
The Planes of Fame Air Museum, one of the world’s oldest and largest collections of vintage aircraft, has been making steady progress on a rare piece of history to add to its already impressive stable of airworthy airframes. The type in question is Bell YP-59A Airacomet 42-108777, one of just six remaining examples of America’s first jet-powered aircraft of the 66 built. It is also a uniquely surviving pre-production variant.
For those unfamiliar with the P-59, the Airacomet resulted from the United States Department of War expressing interest in turbojet-powered aircraft following Major General Henry “Hap” Arnold (Chief of the Army Air Corps) witnessing a demonstration of the Gloster E.28/39, Britain’s first British jet-powered aircraft, in April, 1941. Upon his return to Washington, he wrote to General Electric (GE) requesting they build a licensed copy of the Power Jets’ Whittle W.1 jet engine, given the company’s familiarity with designing and constructing turbochargers and superchargers. The Bell Aircraft Corporation of Buffalo, New York received a contract to design and build an aircraft employing this engine. Within a year of Britain sending a non-airworthy example of the W.1X (along with Power Jets engineers and design drawings for the more powerful W.2B/23) to the States for testing, the XP-59A had not only been shipped secretly to Muroc Dry Lake in California’s Mojave Desert, but had made its first tentative hops into the air with the GE-built I-A jet powering it. However, although the original intent was for the Airacomet to serve as a fighter, fielding a 37mm autocannon and three machine guns, the type proved unsuitable for such a role. Testing revealed that the airframe was both underpowered and an unstable gun platform at speeds exceeding 290 mph. However, despite this setback, the Airacomet did serve an important purpose beyond its technological breakthroughs for American jet deign; it  familiarized pilots, ground crew, and military command staff with jet aircraft operations, a harbinger of the modern combat arena. One example even made its way (by ship) to Britain for comparison against British aircraft types such as the Gloster Meteor jet fighter, which did see combat in WWII.

Planes of Fame’s Airacomet was the seventh of 13 pre-production test aircraft built. It is the second oldest surviving example, with only the Smithsonian’s XP-59A 42-108784 being older. The aircraft was flight tested at Muroc Army Airfield (now Edwards AFB), California. At one point, it was among four prototype P-59s modified with an open cockpit observer’s seat in front of the pilot’s cockpit with a small windscreen in front. While the two XP-59As used their cockpits to fly dignitaries and other personnel on their first jet flights, the two modified YP-59As (42-108777 and 42-108783) were employed as mother ships for unmanned, radio-controlled P-59s flight performance experiments between late 1944 and early 1945 in a joint Bell/Sperry program at Wright Field in Dayton, Ohio. Takeoffs and landings would be guided by a ground controller seated atop a truck while the mother ship would control the drone during all other stages of the flight except landing. 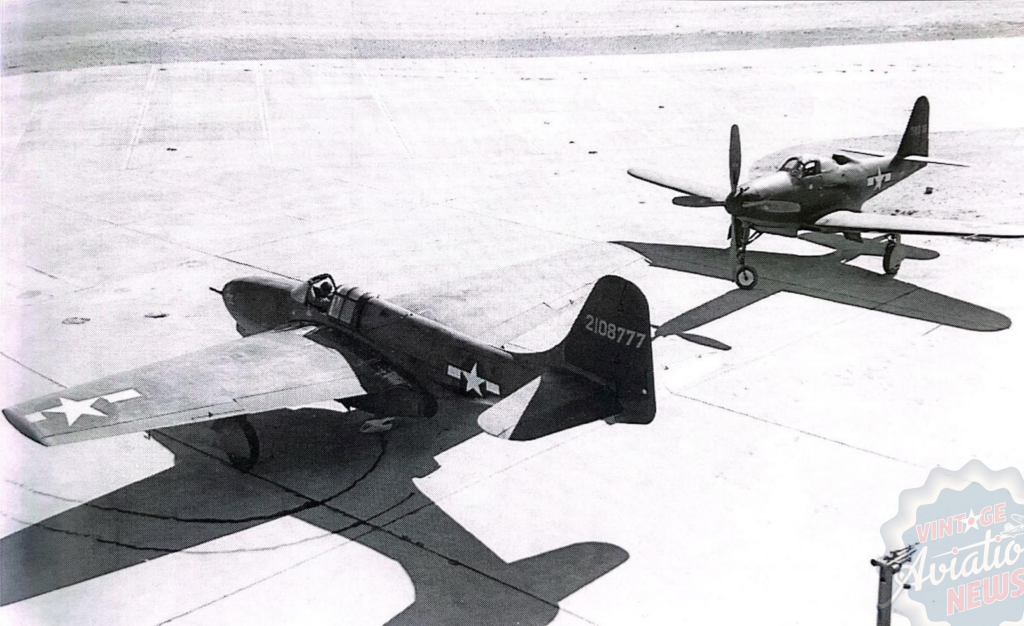 After these experiments were completed, 42-108777 was reassigned to the 412th Fighter Group, spending time in both the 445th Fighter Squadron (FS) and the 31st FS at several locations around California (Palmdale, March Field, Riverside, San Bernardino, and Santa Maria). It has been reported that pilots used 42-108777 to occasionally take base nurses and ground crew personnel on their first jet flights while at Santa Maria. At this point, a makeshift canopy was added to cover the observer’s cockpit. Following WWII, 42-108777 was sold as surplus. Like several other P-59s, it ended up as an instructional airframe with the California Polytechnic Institute in San Luis Obispo. However, unlike most Airacomets, which ended up in scrap yards following their usefulness,  42-108777 had a lucky escape when famed aircraft collector and historian, Edward T. Maloney, bought her for preservation at The Air Museum in Ontario, California. In the 1970s, the museum, renamed as the Planes of Fame Air Museum, had moved to nearby Chino. While the unusual observer’s cockpit and canopy remained in situ on the airframe into the 1980s, that was set to change when its airworthy restoration began during the early 1990s. The aircraft was missing many parts at the time, with replacements having to be found or re-fabricated. For example, the aircraft came without its J31 engines when first acquired, but soon after restoration commenced, the museum was able to acquire three examples in Texas which had originally been intended for the Ryan FR-1 Fireball program.

While the project has moved in fits and starts over the decades, the museum estimates that about 75% of the Airacomet’s restoration is done, with the complex parts such as the wing spars, landing gear and engines already having undergone overhaul. The work which remains includes completing the instrument panel and cockpit functionality, refurbishing the tail control surfaces, and repainting, after which an extensive flight test program could begin. While the restoration effort stalled in recent years, the museum may resume work sometime soon, hopefully by the end of this year. When 42-108777 finally returns to the skies again, it will become the oldest airworthy jet-powered aircraft in the world!
For more information about the Planes of Fame Air Museum, please visit their website HERE.

Many thanks indeed to Adam Estes for this article!