Of all the consequential battles which took place in the 20th century, it’s doubtful that any loom larger in significance, regarding our collective freedom, than the Normandy Invasion of June 5th/6th, 1944. Better known as D-Day, we celebrate the anniversary of this pivotal moment each year with continued vigor. Sadly, however, the generation of young men who prevailed in that epic struggle is dwindling ever more rapidly, and even the living memory of their sacrifice is also fading fast from view. However, a handful of surviving aircraft which participated in D-Day operations still remain, and their stories have a unique ability to inspire and remind younger generations about the significance of those now long-ago events.

Seeing, and hearing, a D-Day veteran Douglas C-47 Skytrain growling through the skies with a stick of paratrooper re-enactors descending from its open cargo bay door is perhaps the most evocative way these aircraft can retell the story of their most important mission. While just a handful of these D-Day veteran aircraft still fly, we can report on one of their number moving ever-closer to her first post-restoration flight, this being C-47A-65-DL 42-100521 Night Fright which flew with the 79th Troop Carrier Squadron, 436th Troop Carrier Group out of RAF Membury during D-Day. She also took part in every other consequential Airborne mission in Europe during WWII. The aircraft is currently undergoing an in-depth, authentic restoration back to flying condition in England, and Charlie Walker, one of her current guardians, is overseeing this adventure; he presents an update on progress for us here!

Rewind back to 2017 and it was all systems go as we were frantically trying to get Night Fright ready for the big one, June 2019 and the 75th Anniversary of D-Day. We were also making – and filming – a TV documentary about D-Day 75 with Guy Martin and North One Television for Channel 4. The finale would have been Night Fright retracing the route she had flown 75 years earlier and dropping Guy on the original Drop Zone in Normandy…

It was a big ask, not impossible, but we had an awful lot of work to do. Back then we were putting in between 500 and 600 work hours every month and we had a team of around a dozen highly-skilled engineers from Heritage Air Services working on Night Fright. The focus was manifold; we had structural work taking place, work in the cockpit, cabin detailing, avionics and on all the sub-systems including the oil, hydraulic and fuel systems. Furthermore, we had three engines being overhauled to zero-time in the USA, split between Global Radial Engines and Anderson Aeromotive.

That February, we found ourselves in Ontario, Canada on another adventure. We purchased a C-47 located at Peterborough airport to give us access to some parts that we simply couldn’t find anywhere else, including a cargo floor and a complete set of original paratrooper benches. We arrived in the worst snowstorm Ontario had seen in 30 years with temperatures as low as -30C and a complete whiteout. A freezing week later and we had removed all of the necessary parts and loaded them into a 40′ shipping container for the journey home, all with a film crew in tow.

It was probably late Spring of 2019 when we had to accept the reality that Night Fright wasn’t going to be ready for the D-Day 75th Anniversary. This was disappointing, of course, but these large restoration projects are full of challenges and hurdles that need to be overcome, and it’s difficult to predict how much effort/time is involved ahead of time. It’s hard to say whether there was one particular thing which caused us to miss our deadline, but I think our determination to make Night Fright the most accurate and authentic C-47 flying in the world today has caused some those delays. We have scoured the globe for priceless and original parts to fit on Night Fright when we could have compromised and used modern equivalents. The detail we were now going into meant that this became a down-to-the-last-rivet restoration of a C-47 – not a small task. It’s hard to explain why projects like this take so long; the only way I can explain it is that every time you come to the next part or piece you need, it often ends up having to be completely remade. That doesn’t mean finding it on a shelf or ordering it either – that means ‘good old fashioned engineering’. Despite not being able to hit our deadline, we still had to come up with a new plan for the finale of the TV programme in the form of another C-47 – we still did the drop following the original route, and it was an amazing process to be a part of!

With the disappointment of missing June 2019, and having evaluated where we were and where we needed to go, we set to work in late 2019 with a renewed sense of optimism. We had decided on a plan of tackling all of the remaining structural work before moving on to the sub-systems and then finally the detailing and cosmetics.

Great progress took place; we built a completely new rear bulkhead, finished the engine cowls, trial-fitted the cargo floor so it was ready for installation, fitted undercarriage jacks, repaired fuel tanks and checked them for leaks, painted, completely rebuilt the crew seats, repaired and installed the wing root fairings, made a completely new tail cone, repaired and painted the horizontal stabilizer, made and installed bump stops, and a myriad other details which needed attention.

As well as the front-line engineering, we were also conducting a huge amount of research. Neil Jones, an RAF sergeant and project volunteer, continued to track down all of the original navigation and radio equipment which would give Night Fright that authentic, 1944 look and feel. Neil also worked on the pararack release panel, the navigator’s table and other internal details.

2020 got off to a good start, with the structural work continuing and progress beginning to take place with some of the internal details. That February also recorded a special moment for the project as we received a visit from the late James Hardt’s family from the USA; Hardt was Night Fright’s copilot on D-Day. And in March, Warbird Workshop, a TV documentary we had participated in, aired on Yesterday TV.

2020 also saw us make contact with the 436th Operations Group (OG) at Dover AFB; the 436th OG is the present incarnation of the 436th Troop Carrier Group which Night Fright flew with on D-Day. We are delighted to have their enthusiastic support, and regularly communicate with the senior team. Furthermore, we have also made a presentation for some of the personnel at Dover  and look forwards to helping educate future 436th OG members about the important role their predecessors played in WWII.

Of course, at the end of March 2020, the UK and the rest of the world were thrown in to chaos with the onslaught of COVID 19. When the UK went into national lockdown, work on Night Fright effectively ceased. Indeed, it wasn’t until October before Heritage Air Services were able to return to the hangar in any meaningful capacity. With structural work on the fuselage all-but-completed, we decided to tackle the last major item on the list – the wings. For the previous eighteen months, we had been putting off the decision regarding whether to use Night Fright’s original wings or another set we had available to us at Coventry.

Ultimately, we chose to use the original wings, staying true to our philosophy of authenticity and originality. We began the process by de-skinning the undersides, a task which took about three weeks. We then thoroughly cleaned and paint-stripped each wing, another labour intensive endeavor which took several of weeks. Once completed, however, we were able to assess structural condition and identify necessary repairs. We were pleasantly surprised by what we found, but there was still a lot of work to do. There were stringers and stringer cleats we needed to replace, not to mention the upper and lower wing attach angles, then there were repairs needed for some of the ribs, an aileron hinge, landing and formation lights. The wing leading edges also needed attention too.

By the end of June 2021, work was all-but-complete on the wings, with all necessary repairs having taken place and the underside of both wings re-skinned. There are a few minor tasks yet to complete: repairs to the right-hand wingtip, the trailing edge sections need fitting and a little bit of skin work post-trailing-edge sections being installed.

We will then move on to other areas of the project, returning to systems work and restoring the cockpit. Many parts are already overhauled and ready for installation as soon as the time is right – these include the engine cowlings, tailplane, fuel tanks and of course the outer wings. So, in the not-too-distant future things will change pretty quickly!

This brings us up to date with where we are presently with the engineering tasks. Most of the wing repairs are now complete and we expect to begin reskinning them imminently. At that point, the wings will go through repainting and we will then return to focusing on other areas of work. While I’m reluctant to give any completion deadlines, particularly in light of the current challenges around the world, but if we continue at the current pace, I feel we can expect Night Fright to be approaching her first post-restoration flight by the end of 2021.

In addition to the aircraft’s restoration, we have also been tackling the task of other aspects in the larger project, which is intended to see Night Fright based out of her original WWII airfield at Membury. Indeed, we are in the final stages of the planning permission process for establishing a museum at Membury. This will be our way of honoring Troop Carrier Command and we very much look forwards to welcoming visitors to the museum. Of course Night Fright will be hangared at Membury, becoming the star of the show, and we hope to operate her from the airfield during the summer months. To our knowledge, Night Fright will become the first WWII warbird to return and operate from her original wartime base!

As part of our outreach endeavors, we rolled out an education program early last year for making presentations to local schools, colleges and aviation museums. Obviously, this program went on hiatus when the pandemic arrived, but we have been able to make presentations virtually in the interim. Living and breathing tangible history while educating future generations about the past is at the forefront of what we are trying to do.

With a project of this massive scale, there is always plenty going on, managing and creating content for social media channels, the website, magazine articles and radio interviews, designing, creating and selling merchandise and creating partnerships. We have partnered with some wonderful like-minded organizations which are helping raise awareness about our project and what we are trying to do. We have also joined the newly-formed DC-3 Society where we can work with the DC-3 community to keep these airplanes flying and promote the work we are all doing.

We look forward to keeping Warbird Digest readers regularly updated with progress as we push to return Night Fright to the air this year.

Warbird Digest published a marvelous article by Richard Paver about Night Fright, her restoration and combat history in Issue 90 of the magazine… backorders are available when you click on the image below! 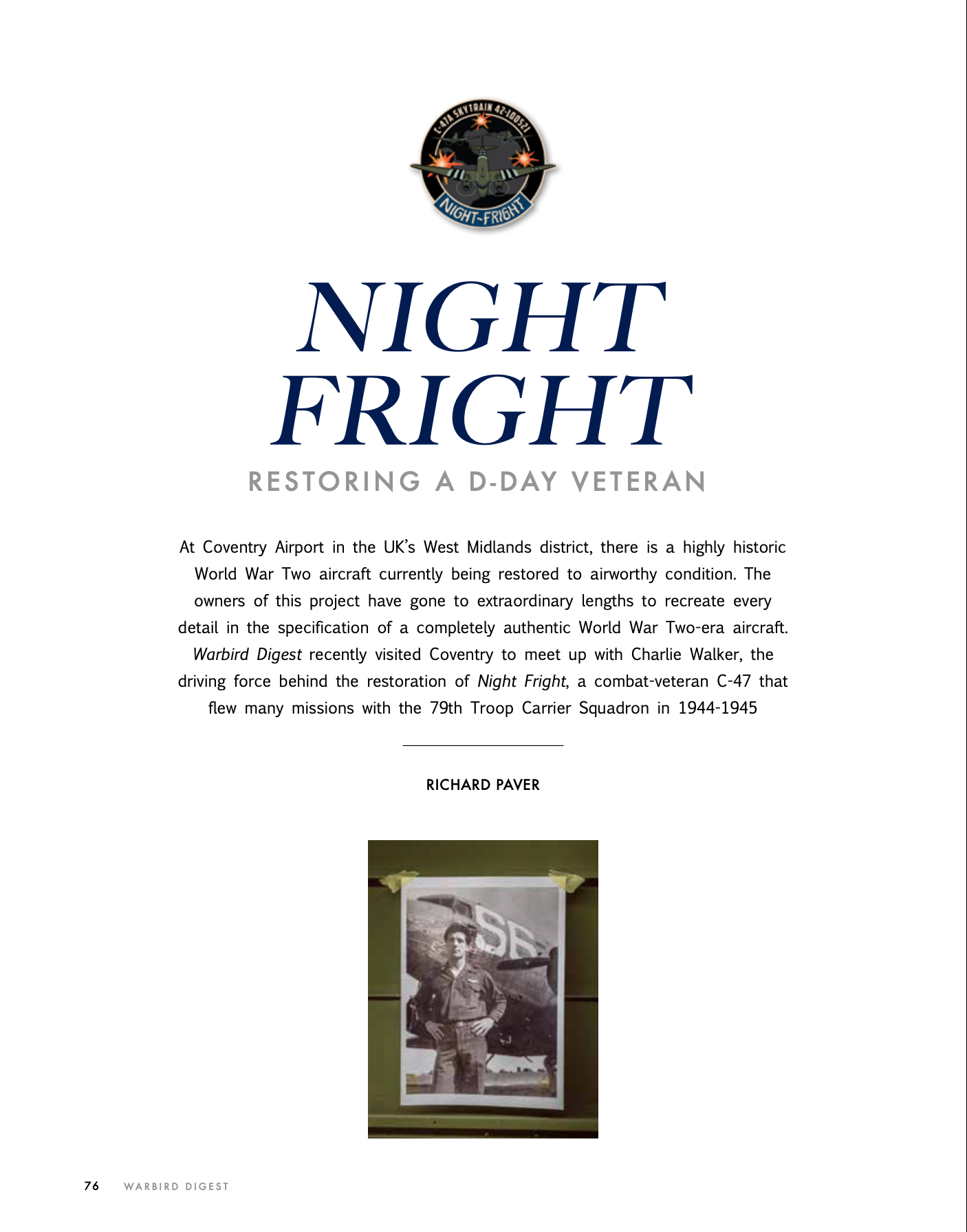