In reality, we should consider this MB-326K a brand new aircraft, because although Aermacchi came close, they never actually completed her construction, nor flew the aircraft themselves. Interestingly, as the ‘KZ’ in her variant designator indicates, Aermacchi began building this airframe (c/n 6754, serial FG754) for the Zairean military. The type was already in service in that African nation, now known as the Democratic Republic of the Congo, and this aircraft was part of a supplemental contract for eleven more examples. However, Zaire underwent financial difficulties which ended up causing contract cancellation part way through the construction process. When this contract collapsed, Aermacchi had nearly completed 6754’s manufacture however, without another customer footing the bill, it was hard to justify her final assembly. As a result, she languished in covered storage for several decades before Volafenice acquired the essentially new airframe… likely making 6754 the lowest-time MB-326 in the world! 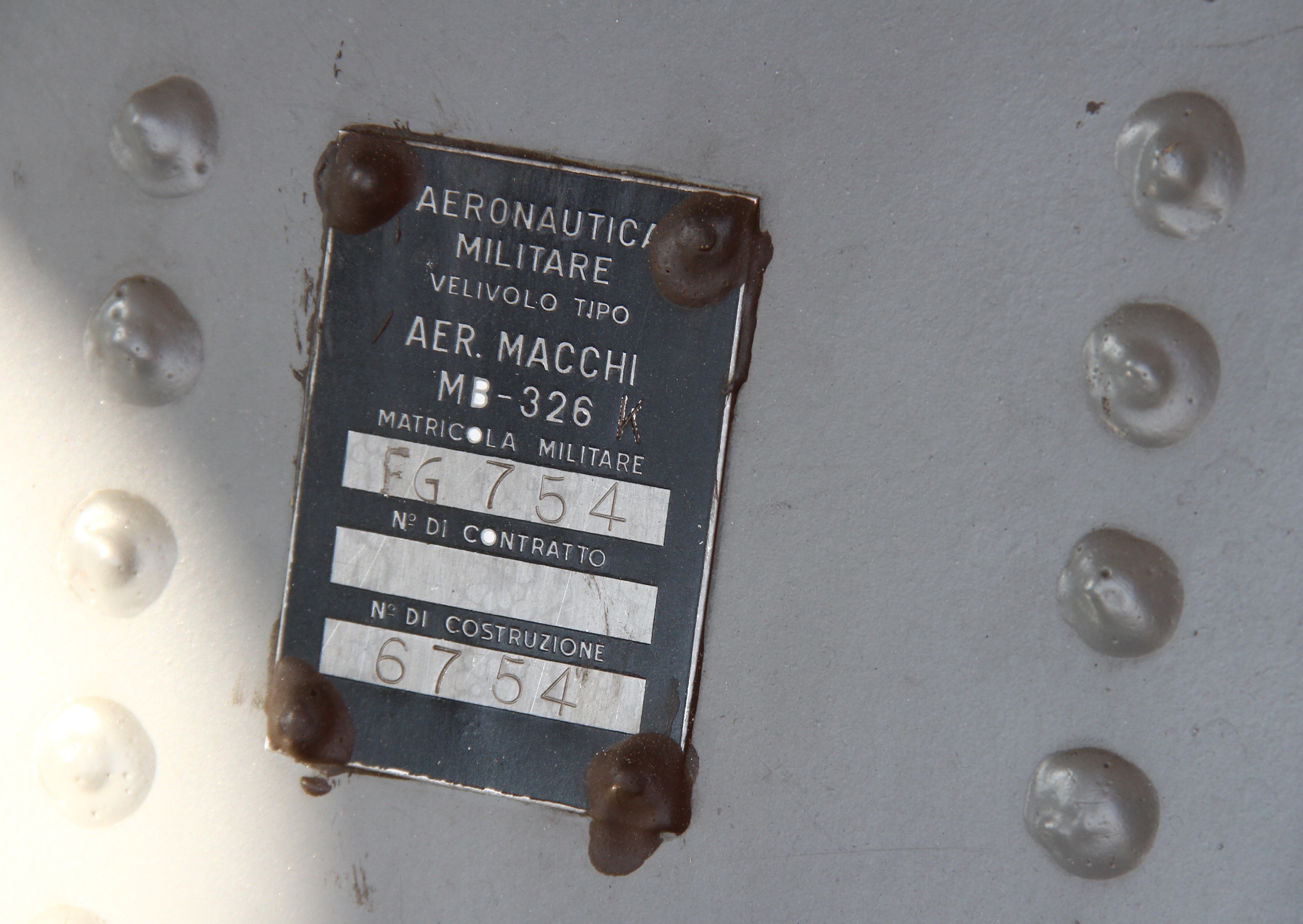 Now registered as I-MBCK, the aircraft is painted to represent MM54391, an Italian Air Force example which served with 311° Gruppo/Reparto Sperimentale Volo (RSV), the flight test unit based at Pratica di Mare Air Base near Rome. Temporarily on the civilian registry as I-KMAK, the former MM54391 took part in a marketing campaign at several air shows and exhibitions (Le Bourget: 1971, 1972, 1975, 1979; Farnborough: 1972, 1974, 1976; Hampshire, 1978). But perhaps most importantly, MM54391 toured Brazil in 1974 where, in the hands of Aermacchi test pilot Franco Bonazzi, she performed numerous demonstrations at various Brazilian Air Force bases across the country. Brazil became a major customer for the type, and also spearheaded several successor designs as well.

Interestingly the original MM54391 played a role in ‘754’s restoration. The aircraft was on outdoor display for many years at Pratica di Mare Air Base, but in June, 2015 Volafenice disassembled her to recover numerous missing parts for FG754. At the end of this delicate recovery work, Volafenice donated the MM54391 to the Malpensa Museum “Volandia” where the aircraft will eventually be restored for static display. It is thanks to the volume of parts recovered from the real MM54391 that FG754 inherits a portion of her history, as those components were critical in allowing FG754 to fly. It is fitting to see FG754 wear ‘391’s colors as a testament to the airframe’s importance in the variant’s history.

Retired Italian Air Force officer, Cdr. Maurizio Lodovisi took ‘754 aloft for her maiden flight at approximately 15:24 local time on September 26th. In many ways, Cdr. Lodovisi was the ideal candidate for this role, as he is highly experienced on the type, having flown them during his time at the RSV in the 80s. All apparently went well, and the aircraft has made other flights in the interim. The photographs below were taken during the initial hop from the rear seat of MB-326E MM54168, another of the breed owned, restored and operated by the Volafenice collection.

For a little background on the Aermacchi or Macchi MB-326: The type was a light military jet trainer aircraft which first flew in December, 1957. Production began in 1961 and the type achieved significant commercial success, being adopted by ten different air arms around the world. In addition, Australia, Brazil and South Africa each built them under license. The type was in production until 1975 with more than 800 examples rolling off the various production lines. It was such an effective aircraft that the last active military examples were only retired in the last decade! As with most successful military training aircraft, the type received interest for use in combat roles. And as such, several light attack variants emerged, of which the MB-326K was one. The MB-326 set several category records in the mid-sixties; indeed it was one of the last Italian aircraft to set any world records. According to wikipedia, these included the following:

As noted earlier, Volafenice owns and operates the two-seat former Italian Air Force trainer MB-326E MM54168, which the museum restored to flight over a six year period. She took to the skies again in 2012. You can read our online article about this restoration HERE or see Luigino Caliaro’s article inside issue #50 of Warbird Digest (click HERE).

The aircraft’s owner, Renzo Catellani has always had a passion for airplanes and flying. He founded the Museo dell’Araba Fenice (Museum of the Phoenix) to collect aeronautical artifacts to help educate the public about aviation history. Volafenice (more properly known as the Museo Volante Vola Fenice – or Phoenix Flying Museum) is the main museum’s subsidiary tasked with restoring and operating historic aircraft. The flying museum got started when Catellani acquired the remains of a SAIMAN 202 trainer (MM52165) and a more complete example (MM 52163) as well as two airworthy warbirds – an ex-Italian Army Cessna O-1E Birddog (MM61-2963) and a Mudry CAP 10B trainer (F-GKJI, n.c. 20, ex Armée de l’Air). In the years that followed, the collection has expanded further with the acquisition of a Piaggio P.148 (IAF MM53544, the first Itailian Air Force example), Fiat G.91R (IAF MM6305) and the two Aermacci MB-326s, all of which have a significant place in Italian military aviation history. The museum also operated former Royal Air Force Hunting Jet Provost T.5A XW355. Indeed, Catellani bought this aircraft, along with Jet Provost T.3A XM478, to gain the necessary experience for owning and operating a high performance jet aircraft. XM478, as it happens, became the very first ex-military jet on the Italian civil register! Now retired, the T.3A is on display at the aforementioned Volandia Aviation Museum.

Now that the MB-326K is flying again, restoration work will likely continue on other airframes in the Volafenice collection. It’s anyone’s guess at present as to which of them will be the next piece of magic to emerge from the museum, but whatever the case, it is marvelous to see former Italian military aircraft experiencing their own renaissance, finally. Long may it continue!

We wish to thank Renzo Catellani and his team for sharing these photos with us, and of course for preserving such a beautiful warbird for the enjoyment of all. Special thanks to Luigino Caliaro and Daniele Mattiuzzo for helping with the drafting of the article.