As many of our readers will be well aware, Avro Lancaster B.VII NX611 Just Jane is under restoration to airworthy condition with the Lincoln Aviation Heritage Center at former RAF East Kirkby in Lincolnshire, England. The group has made magnificent progress, even during the pandemic, and we thought that our readers might like to see a recent (edited) report, reproduced here with permission…

This week has been another involving great visual progress. The team has lowered the front spar for NX664’s port wing from the jig onto trestles, where it will undergo inspection and 3D-scanning. The team has also unbolted the rear spar from the jig to enable evaluation of its previously-obscured rear face (when we first had a look at the wing in France, its trailing edge was still attached, denying visual access, and since its arrival at East Kirkby the wing has sat vertically on that face). With access to this area now, we found a portion of the spar webbing with  significant corrosion, which necessitated its removal for replacement with new material. The spar web plate attaches to the booms with specialized bolts – nothing that can be bought off the shelf and they are all different to each other. Luckily each of these bolts unscrewed and slid out without too much difficulty, allowing us to remove the web plate for reproduction. Keith took on this task and is all-but-finished with the endeavor – it just needs de-burring and cleaning before it can be sprayed with primer paint.

Lowering the front spar was easier said than done, of course. We were very much venturing into the unknown again, as the component’s weight is not mentioned in any of the drawings. We decided to use the A-frame lifting hoist to shoulder the heftier end for lowering to the ground while the team bore the weight of the lighter end. This seemed to work well and, as it happened, we found that 6 of us could lift the whole spar. 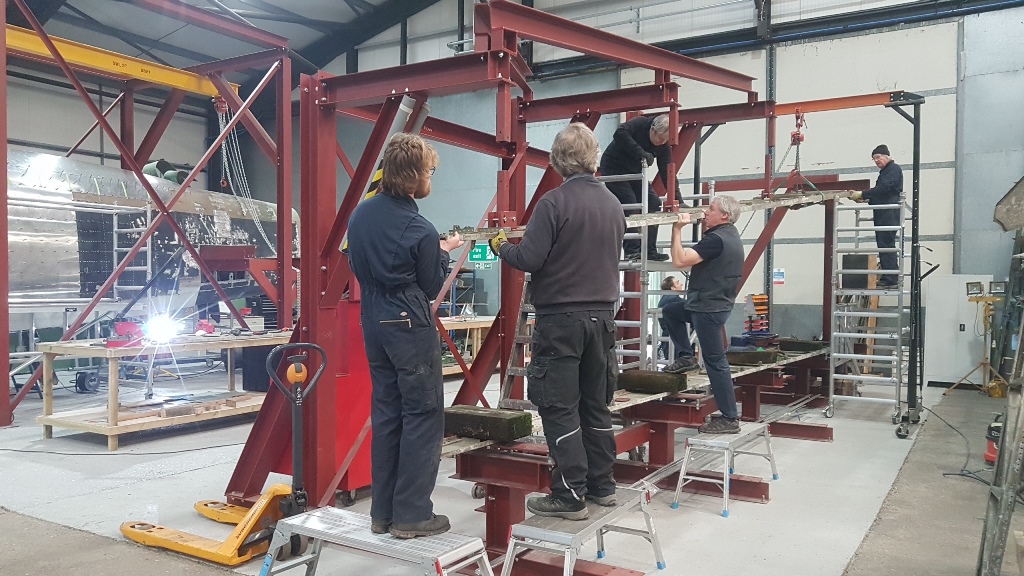 Dave has been continuing to plug away at the production of replacement formers for KB976’s rear fuselage; he has remanufactured 8 of the 12 halves required so far. Phil has been working with him this week and has started to drill and cut one of the new formers ready for fitting to the rear fuselage. In preparation, Phil removed the damaged former from the fuselage and pinned it together to preserve the correct shape. He has then been able to transfer the lightening holes to the new material and work out the locations for the stringer cut-outs. This is a time consuming process and very much demands following the ‘measure twice and cut once’ theory, because a misplaced hole will ruin the newly-made part and necessitate its replication – again!

Sticky has been able to complete the rebuild of NX611’s number 2 engine, and it was ready to fit on Thursday however he has had to await teleporter availability for the refit. This will hopefully occur in the coming days so that NX611 can be ready for taxiing events in the coming season.

There are lots of little pockets of work going on with many of the details and unseen parts from NX664’s wing undergoing repair. Les and Bill are repairing one of these components, a buffer which sits in the number 2 fuel tank bay. It has needed some rivet replacement and skin repair. Les has also started cleaning the front spar booms. All of this smaller work takes many hours labor and will go unseen in the end product, even though it is equally vital to the more visually apparent details.

We are hoping to get our Gofundme wings campaign up to £30,000 in a very short time in an attempt to cover the ongoing costs with the wing and the prospective wing trailing edge jig which is being drawn up. If you would like to contribute to the Wings Fund and receive your special Wings Fund badge then please click HERE.

Stay safe and thank you for your support!

Below is the latest video of the restoration work…