At American Aero Services, the restoration of a Japanese Kawanishi N1K1 Kyofu (Mighty Wind) is about to begin.

The Kyofu, (Allied reporting name ‘Rex’) is unusual for having been developed from scratch as a floatplane fighter for the Imperial Japanese Navy. By the time the type development was complete, the enemy types it was to face were no longer second grade, and no floatplane fighter was able to outperform the lighter, less encumbered land equivalents. Nevertheless, the ‘Rex’ fighter sent to Balikpapan acquitted themselves well. 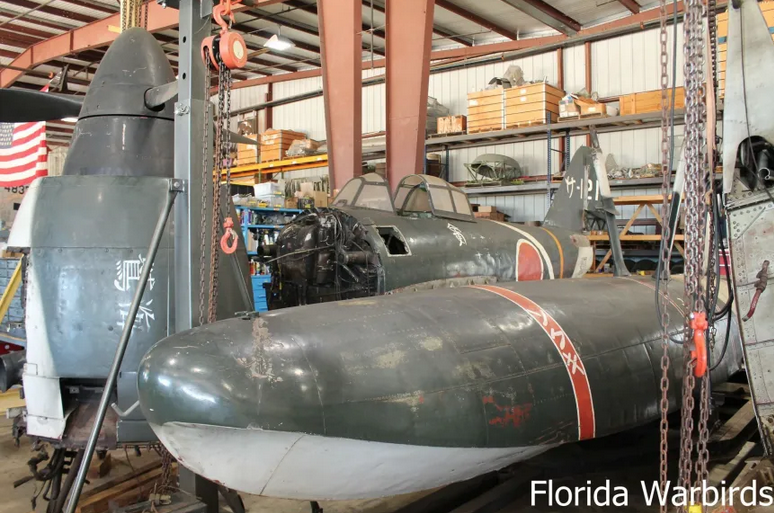 The Kawanishi team then took design elements pioneered on the ‘Rex’ (such as a laminar flow type wing) and went on to develop the (highly regarded) N1K1-J ‘Shiden-Kai’ land-based fighter, reporting the name ‘George’. Less than 100 floatplane fighters were built, and over 1,400 of the landplane ‘Shiden-Kai’ variants.

This floatplane, known as ‘Rex’ 565, was part of the 951st Kokutai (Air Group) at the tail end of World War Two. Captured, it was one of four that were brought back to the United States for technical evaluation at the end of the Pacific War. Today only two others, still in the USA, survive worldwide. They are 514, stored dismantled at the National Air & Space Museum, Paul Garber Collection, and 562 with the National Museum of the Pacific War, Fredericksberg, TX.

After the evaluation, at NAS Patuxent River, ‘Rex’ 565 remained with the US Navy and was displayed outside at NAS Willow Grove from 1958 until 1999 when it was placed into storage by the National Museum of Naval Aviation, Pensacola FL. Now in the hands of American Aero Services, this aircraft will be restored to static display standard. The aircraft appears complete, though tired, and was repainted several times and will certainly benefit from a full twenty-first-century restoration.