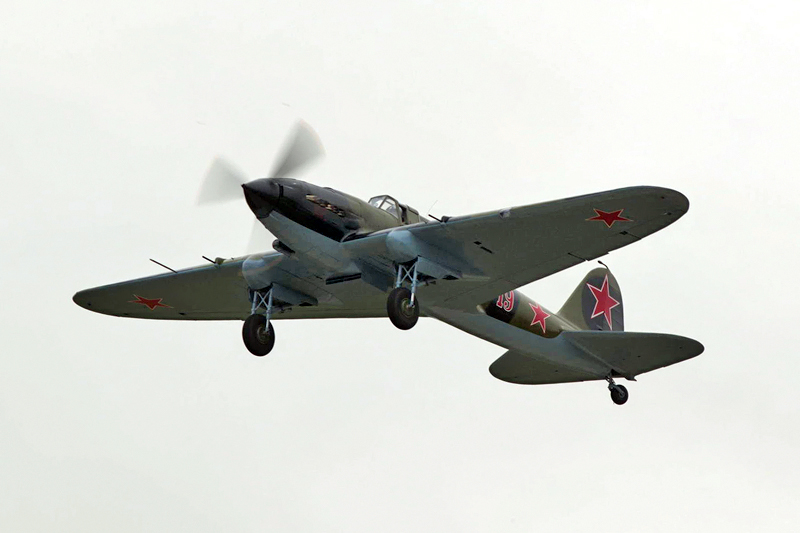 On June 16th, 2017, a newly restored Ilyushin Il-2 Sturmovik took the skies over the Siberian Research Institute of Aviation (SibNIA) airfield in Novosibirsk, Russia. This WWII vintage attack aircraft is only the second of its type currently airworthy, with the other being Paul Allen’s Ilyushin II-2M3 based with the Flying Heritage & Combat Armor Museum in Everett, Washington. The restoration was a cooperative venture between several Russian organizations, including the Ilyushin Foundation for the Promotion of the Preservation of Military-Historical Aircraft, the Ilyushin Aviation Complex and the Wings of Victory Foundation.

Vladimir Barsuk, director of SibNIA, was the test pilot for the initial flight.

“The legendary Il-2 is back in the sky. This restoration has been a success for us. It is an incredible feeling to be able to see with our own eyes the airplane that our grandfathers and great-grandfathers fought with during the war,” said Alexey Rogozin, the general director of the Ilyushin Aviation Complex named after Sergey Ilyushin, the famed aeronautical pioneer.

In the next few months, the Sturmovik is expected to conduct an extensive program of demonstration flights, including one in Novosibirsk for the guests of the International Forum of Technological Development “Technoprom-2017”. Then, in July, the aircraft is scheduled to fly at the MAKS-2017 airshow in Zhukovsky outside Moscow.

Two groups named “FROM” and “IKAR” performed the search and recovery of the aircraft, which they discovered in December 2011 at the bottom of Lake Krivoye in the Murmansk region. Funding for the efforts came from the Wings of Victory Foundation, as well as relatives of the Il-2’s last pilot.

Junior lieutenant Valentin Skopintsev with his rear gunner, Vladimir Gumyonny, flew this Il-2 with the 46th Assault Air Regiment of the Northern Fleet Air Force during an air battle on November 25th, 1943. The Sturmovik received damage in the engagement, which forced the crew to belly land her on a frozen lake. Both men escaped the aircraft, which eventually fell through the ice, sinking to the bottom of the lake where it would remain for the next seven decades. Now the Il-2 flies proudly once more, and she is sure to make an impression on all who see her.

Article and photos via www.ilyushin.org and Wings of Wing Foundation.