It has been a while since our last update on progress with the Hawker Typhoon Preservation Group’s restoration of Hawker Typhoon Mk.Ib RB396 in Britain, but a lot has occurred in the interim, especially with the rear fuselage which is presently coming together with Airframe Assemblies on the Isle of Wight. With significant visible progress to share, we will let Sam Worthington-Leese explain how things have been moving forwards…

In the last three months, Airframe Assemblies (AA) has made some great progress. The stretch-formed, Frame K sections arrived (finally). The team assembled these two halves, making the various tweaks and adjustments that have prove necessary throughout any rebuild. With a good fit ensured, these parts have now received their final trim and fettling.

While a split was discovered in one of the original Frame A sections, repairs were carried out successfully. Furthermore, AA manufactured all twelve main fuselage skin panels on their Farnham roller, and these sections have undergone trial fitting on the fuselage frames within the jig. Skin edges normally require a little shrinking to tighten them up for a correct profile and shape over the fuselage taper – and to ensure that no “bagginess” or “panting” occurs during final-riveting; this has been completed. The prepared skins are drilled off the frames in the jig and then removed to begin fitment of stringer sections.

The stringers are a mixture of original and new parts, with appropriate repair pieces to allow splicing and joining between them. Each stringer has to be cut and spliced to fit at designated lengths and fuselage positions, and all of them have at least two joints. There are 26 full-length stringers in total, so preparing them isn’t a swift exercise; there are also doubler plates for where the skin joints attach. Most of the twelve skin panels are now fitted with stringers. 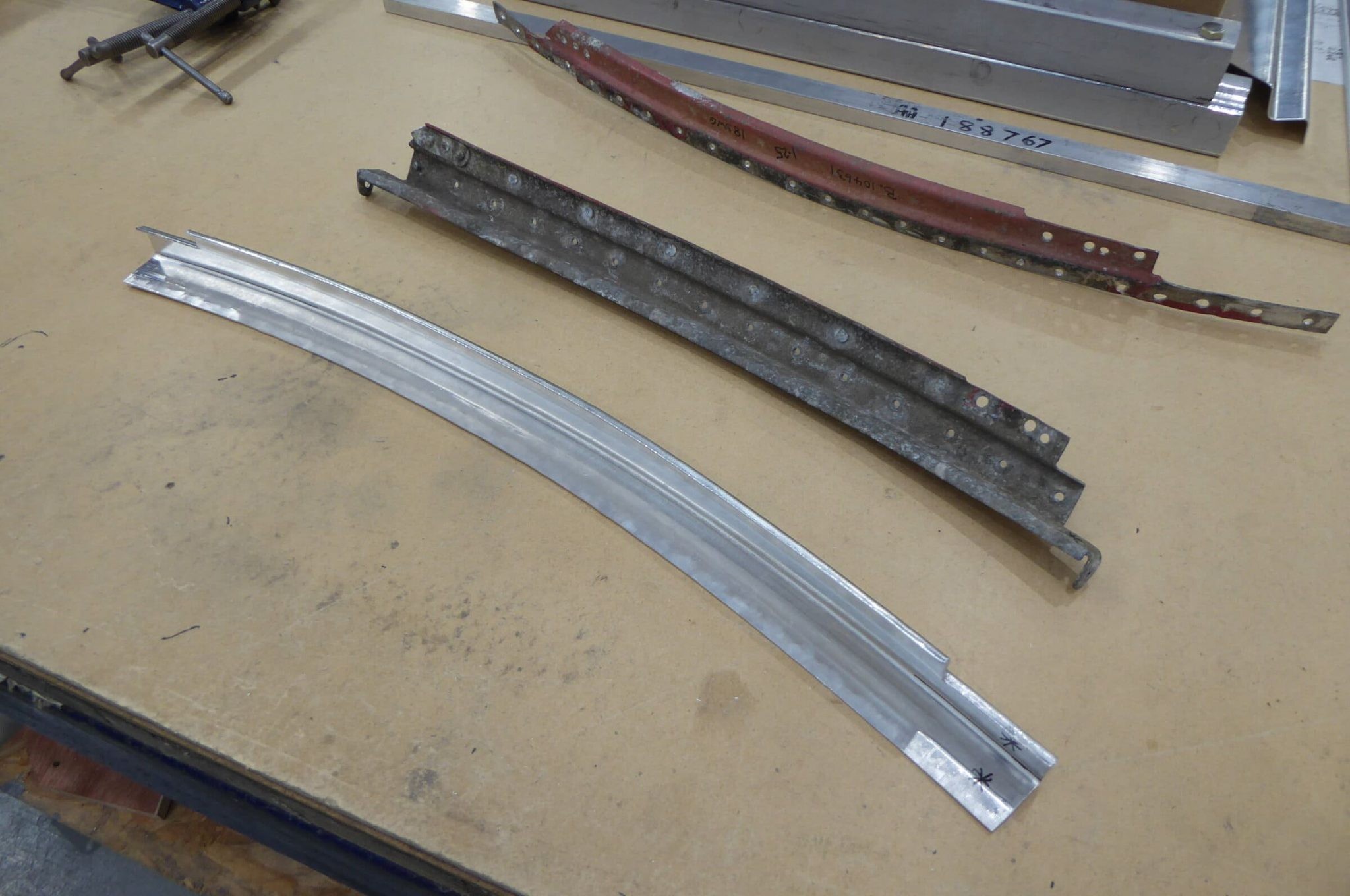 We have discovered some of the missing information regarding the doors and doublers between the front end ring and frame A, and we are hopeful that the additional work which the project research team provided recently will fill in most of the remaining gaps. These parts are only now entering the production process, as it made sense to wait until all of the measurements could be made accurately. 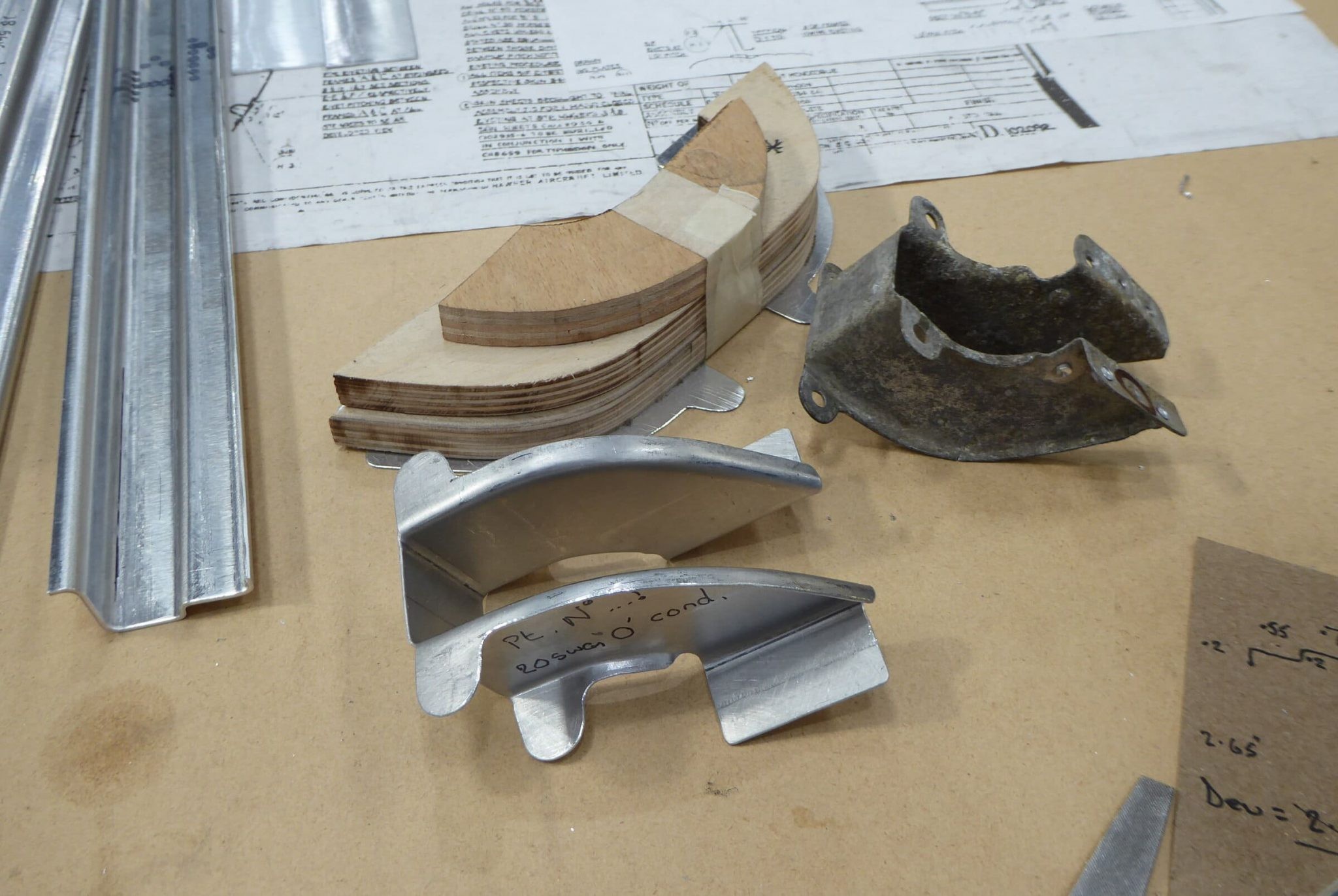 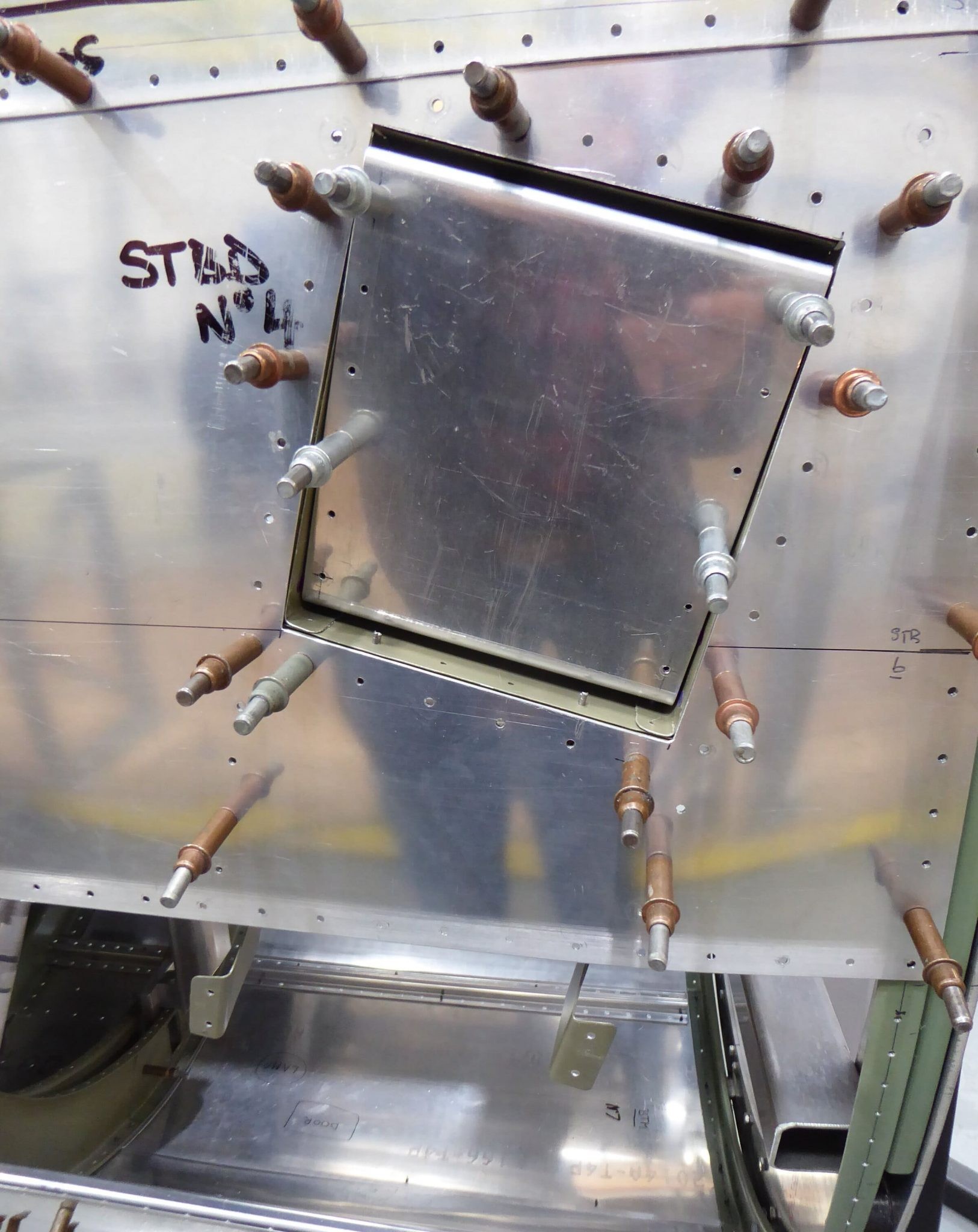 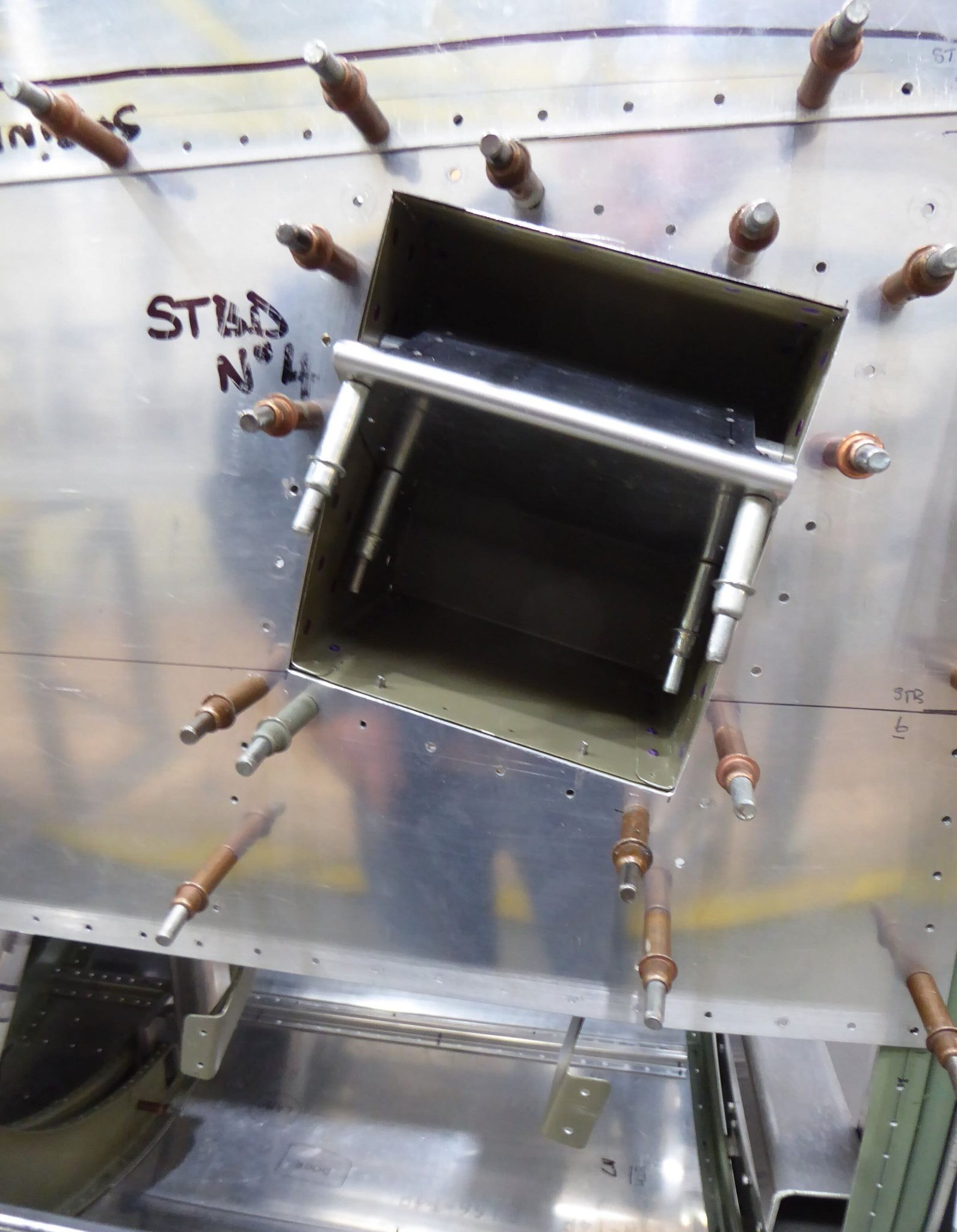 Unfortunately, three of the four Frame A fittings in our possession required remanufacture, along with the tubular structure at the forward end of the rear fuselage. This has both added time and, more importantly, expense to this phase of the project, although we are uncertain of the exact figure required of either resource at present. Regardless, we have sourced the appropriate material for these components and identified a third party company to produce them. While we will not have an extra set of these parts constructed at this time, due to the extra cost and unlikely necessity for their replacement, we are purchasing a full length of this material, as it meets the spec required elsewhere in the rebuild, including the cockpit section currently with the Aircraft Restoration Company (ARCo) at Duxford.

The access door surrounds need further detailing, but are well advanced – they are suitably over-engineered as most British items of the day were. Frame repairs are ongoing in certain areas in order to retain as much originality in the restoration as possible – the team are still on target to reuse as much as 80% of the original rear fuselage internal structure (not including the skins) which is a fantastic total in comparison to many other ground-up restorations. This is a detail which we hold dear – we want to preserve as much originality and authentic detail as possible.

A recent query from Airframe Assemblies questioned whether we would like the internal flare chute structure, and door, (which will never be operated or seen) to be completed to a working standard. Our answer, as ever,  was an emphatic “YES!” – We are building a unique memorial to all Typhoon crews here, and we feel the only way to accomplish this properly is by resurrecting everything as authentically as possible. 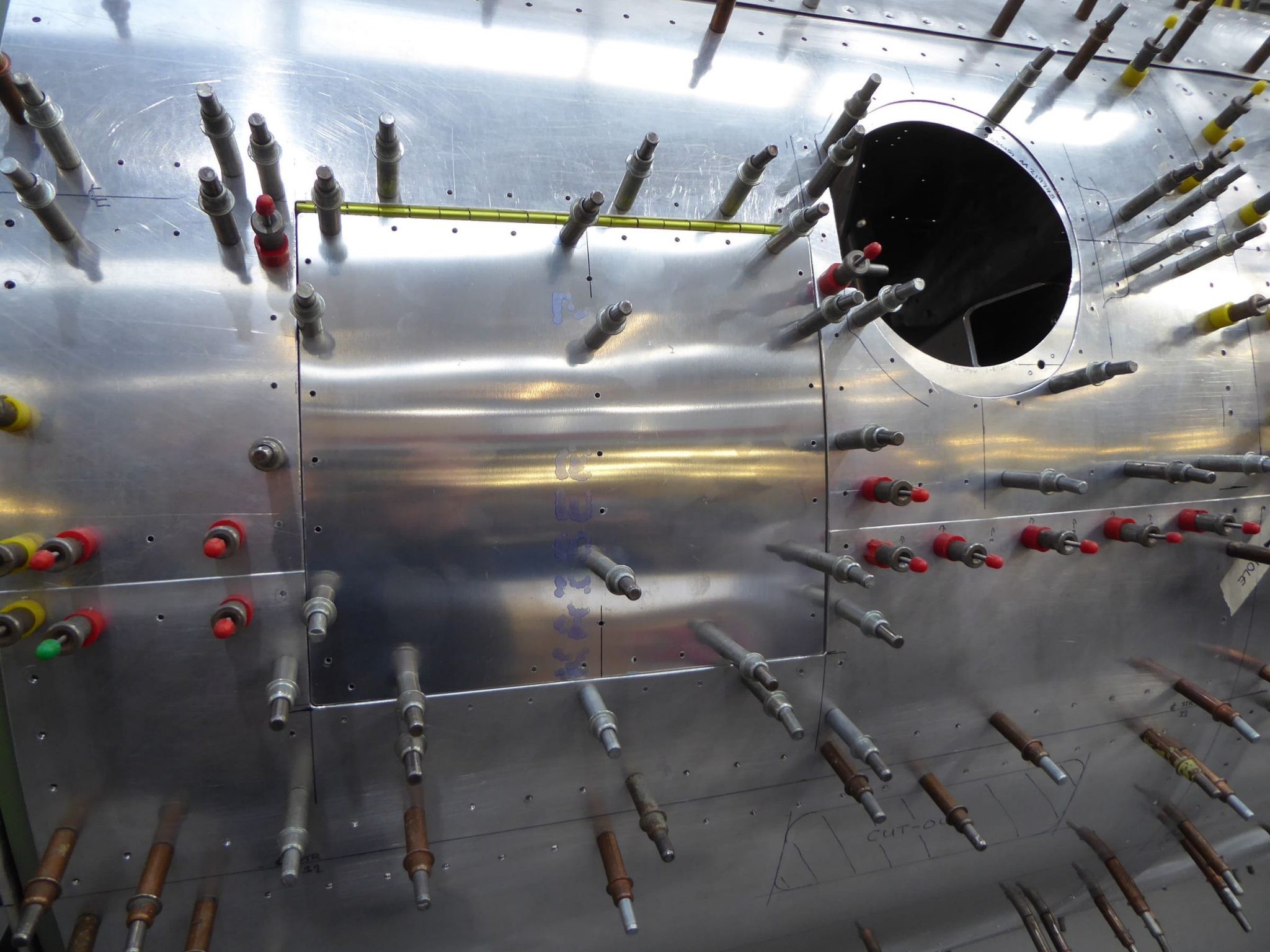 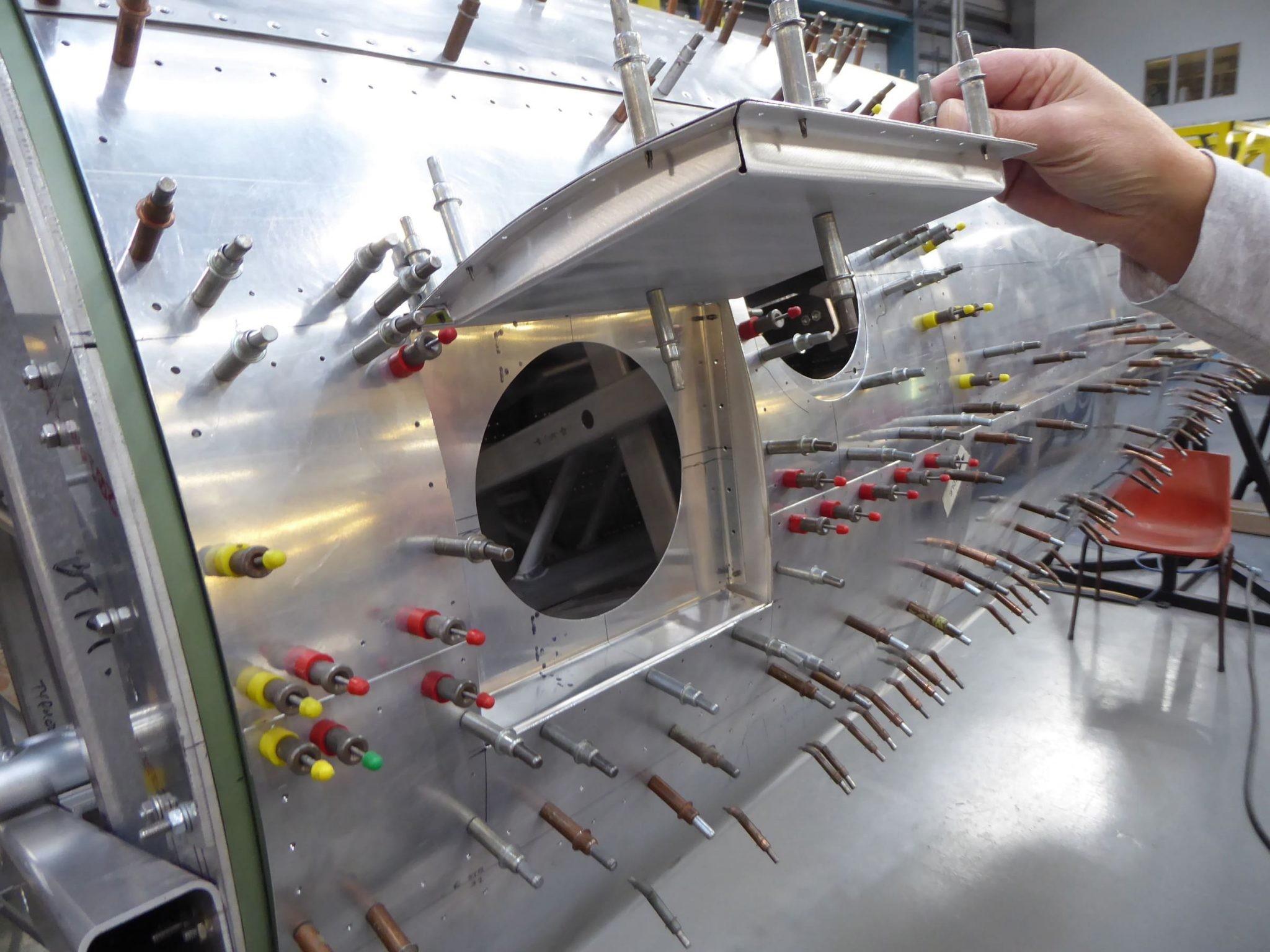 Furthermore, we recently received the following, somewhat bemusing note from Steve Vizard at Airframe Assemblies regarding the final stages of fuselage assembly:

“The actual final fitting and riveting of the skins to the fuse in its jig could be problematic. There will be some serious head scratching on this one….Hawkers apparently had a series of separate jigs and fixtures to allow the skins to be assembled off the fuselage, and then had a ‘hollow’ final holding frame where it all came together. We obviously – only building a one off in a single fixture – have to try and complete all these sequential stages working on a jig with a complex internal structure…!

We will come up with a method – but then we have to get the completed fuse OFF the jig (which had to provide all that we needed in one unit)….bit of a catch 22! We may have to dismantle the jig internally, bit by bit, until the fuselage can be safely removed. All doable…and it’s good that we relish a challenge.”

This is what Airframe Assemblies do, and in partnership with ARCo, we are absolutely certain that we have the right professional organisations involved in RB396’s rebuild. What’s more, it is fantastic to see how excited these companies are about working on something so different. While everyone loves a Spitfire, a type which each company has restored many times over, RB396 is different for them – for everyone in fact; it is abundantly clear that their engineers truly relish the challenge this aircraft presents. 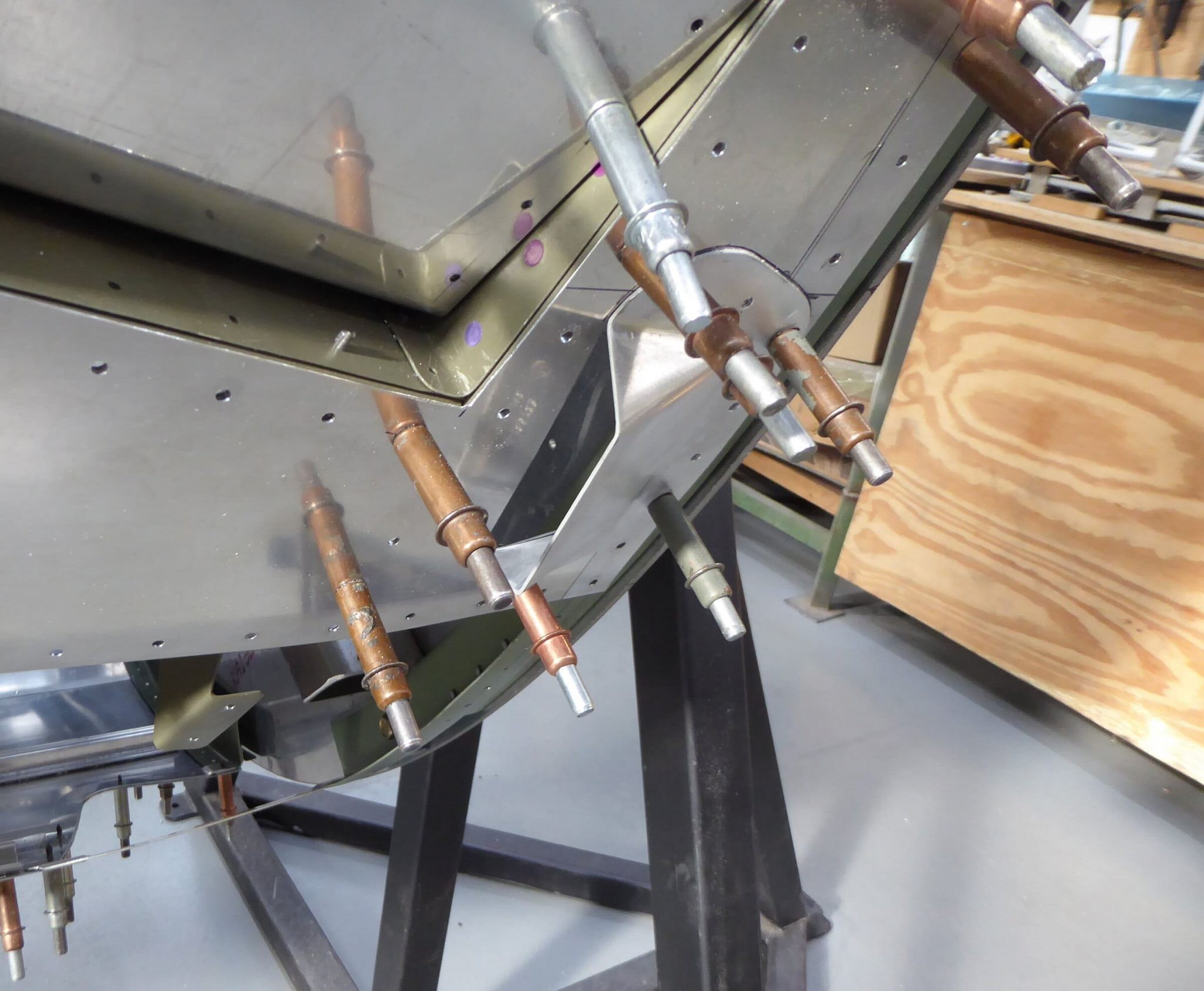 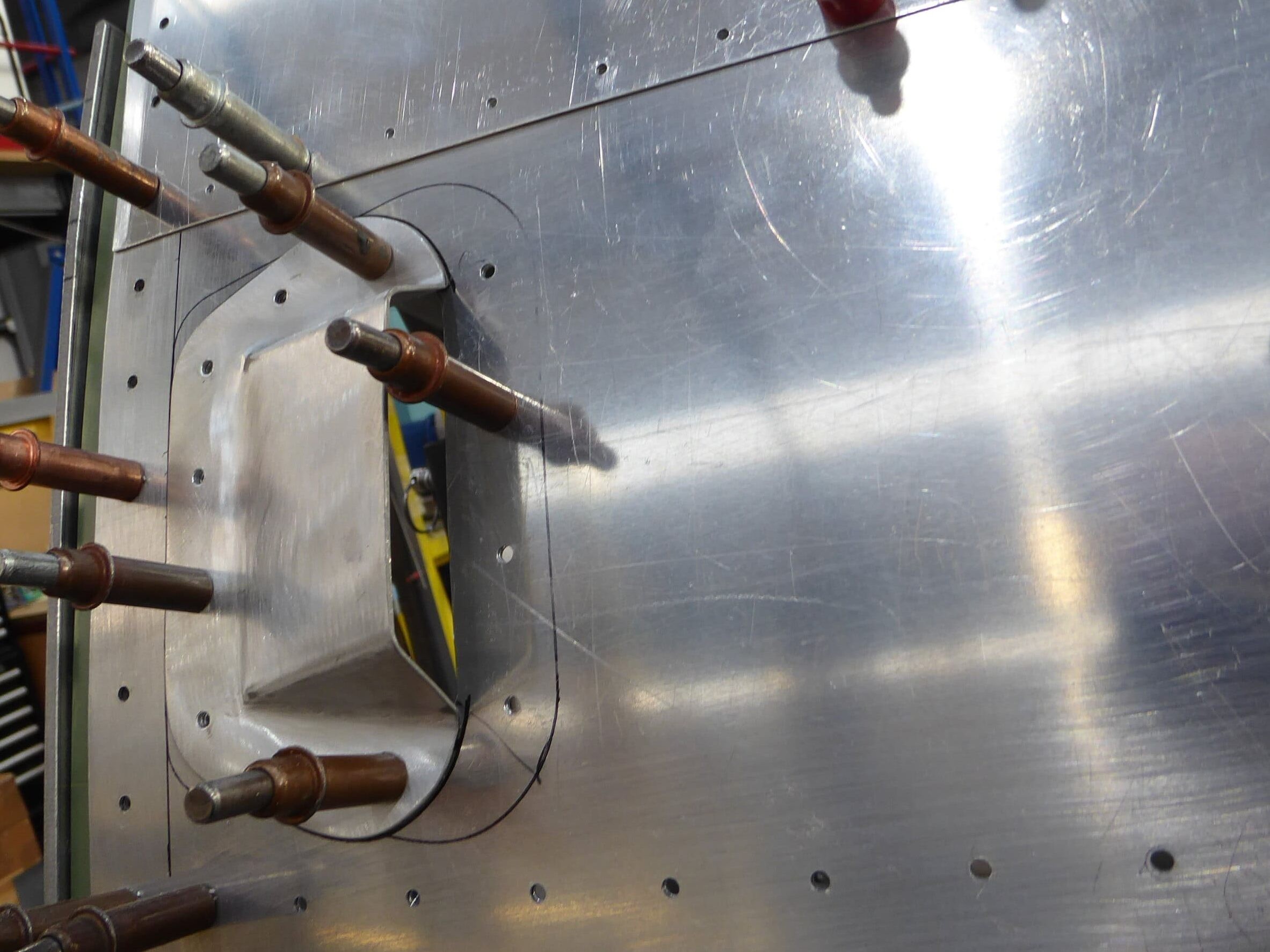 We recently reduced the spend rate from roughly £30,000/month to around £10 – 15,000. This will help us cater for the cockpit section rebuild (and its associated costs) at ARCo and a little uncertainty at AA regarding affixing the tubular frame to the forward frame of the rear fuselage. It will also help preserve cash flow options, as contributions have reduced considerably since passing the £1million raised/pledged mark. We did not want to press too far ahead, only to have to undo some of the work for the purpose of the tubular frame; that uncertainty has now been resolved, and parts are now under manufacture as mentioned earlier.

The time-lapse video below shows the technicians at Airframe Assemblies trial fitting the rear fuselage skin sections – it’s quite fascinating, as this is the first time such a scene has been on view since the end of WWII!… If you look carefully, you will witness the supporters visit (23rd September) which allowed a number of project sponsors to see the work in person. Indeed, the opportunity for such visits is one of the main benefits of being a supporter – having “up close and personal” access to the build.

Visits to the engineering workshops where the rebuild is happening are an exclusive benefit to supporters – all supporters – and if you wish to get this kind of access, then please do join us to help this important work continue. If you haven’t done so already, please subscribe to our YouTube channel; we will be posting more content as the build progresses! Thanks again for your support!

Many thanks to Sam Worthington-Leese for this latest update. Anyone who wishes to help the Hawker Typhoon Preservation Group with their mission to resurrect an airworthy example of Britain’s finest WWII-era ground attack aircraft should click this link!