On Thursday, June  24th, 2021, the Hawker Typhoon Preservation Group took its next major step in the return to flight of Hawker Typhoon Mk.IB RB396. Major sections of the historic airframe are now residing within the Aircraft Restoration Company (ARCo)  hangar at Duxford Airfield near Cambridge, England. These components comprise the Typhoon’s: center section/cockpit and the associated parts (including the engine mount); the tail section, rear fairing and Tempest rudder, elevators and elevator tips; four undercarriage legs; the Napier Sabre engine; propeller hubs, spider, and spinner; and six crates of other associated parts and sections. 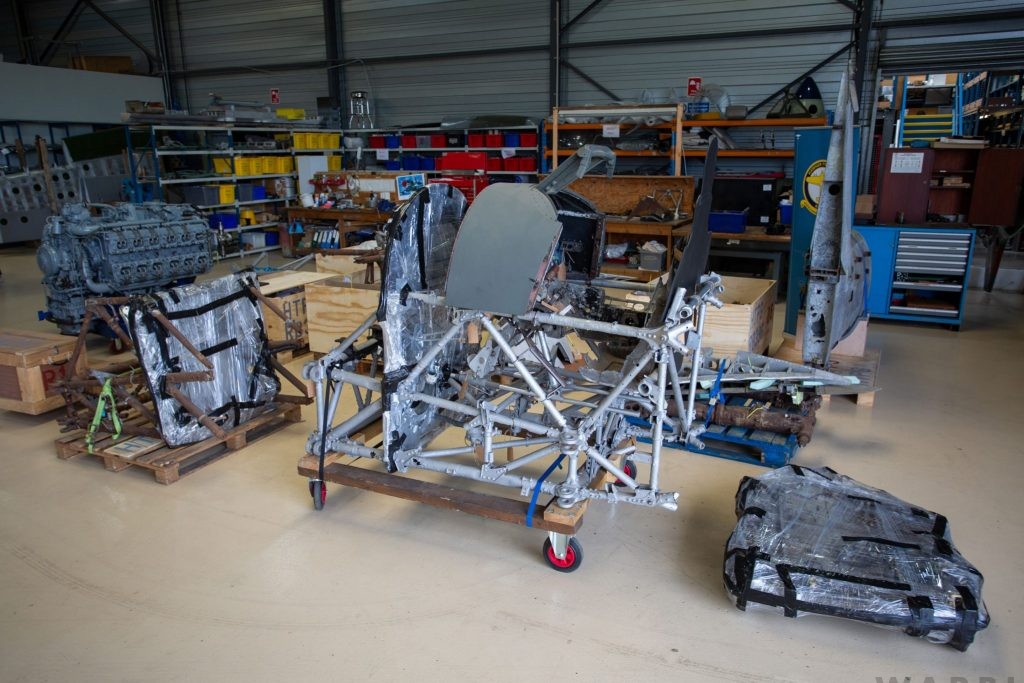 This is a large number of parts and a substantial move. The cockpit will be the first section that ARCo begins working on, but the opportunity to move the other major sections to the company’s facility at the same time made sense for the following reasons:

The first step for the cockpit is to collect and make adjustments to the jig, whilst gathering all of the necessary engineering data. Following that, the restoration team will disassemble the cockpit section, assessing each component as they remove it, thus allowing an accurate cost estimate for each item’s completion. Presently, the estimate for restoring the Typhoon’s cockpit/center section is in excess of £400,000. 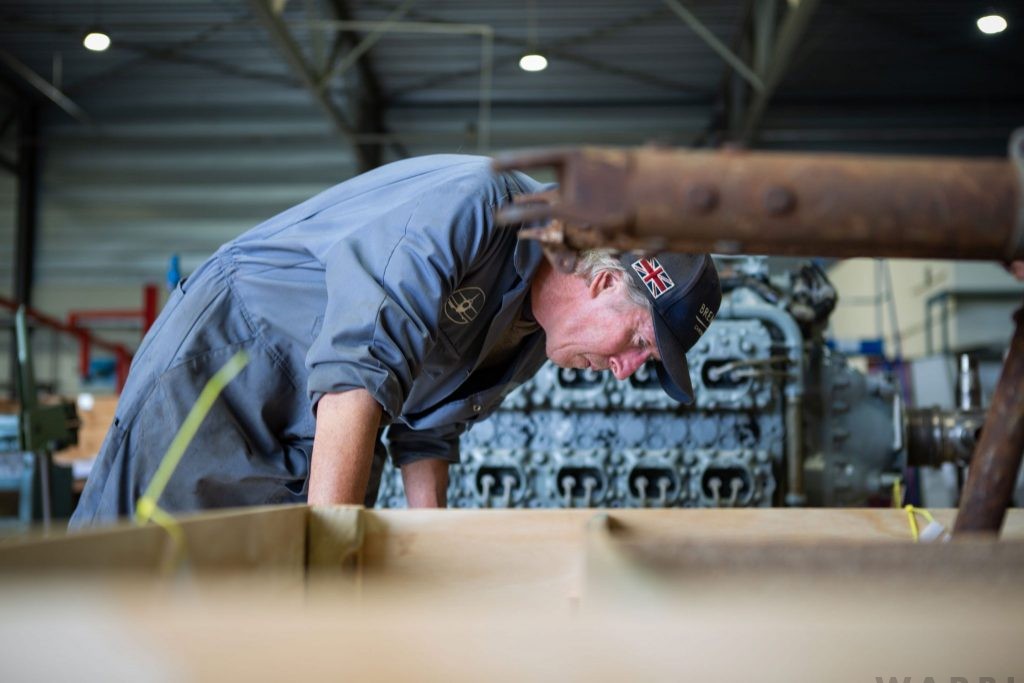 This next step has been in the planning stages for some time, and that it can happen now is a result of continued fundraising success, with all funds secured for the first stage (the rear fuselage) which is nearing completion with Airframe Assemblies. As announced at T, with coverage in most vintage aviation magazines, but primarily on the Vintage Aviation Echo where it still remains as their most viewed article in a day – showing the level of excitement surrounding the partnership.

While the Hawker Typhoon Preservation Group announced that ARCo would serve as their engineering support partner for the project at the October supporters’ open day back in 2018, it would be quite wrong to assume that nothing has been happening on that front in the interim. ARCo has frequently supported HTPG since that announcement, helping answer queries and even in sourcing/confirming parts for the project. They have also held several meetings to discuss the project since joining forces, and in developing plans for the move. The timing for this move depended upon first securing the funds necessary for completing the rear fuselage and thus having a firm end date in sight. Up until recently, with the uncertainty which the pandemic introduced and a number of material and tooling delivery delays, it was not possible to predict firm costings or a restoration end date for the rear fuselage. However, as the nation emerges from lockdown, Airframe Assemblies are confident that they will complete the rear fuselage by the end of September 2021, at a final cost of roughly £340,000. 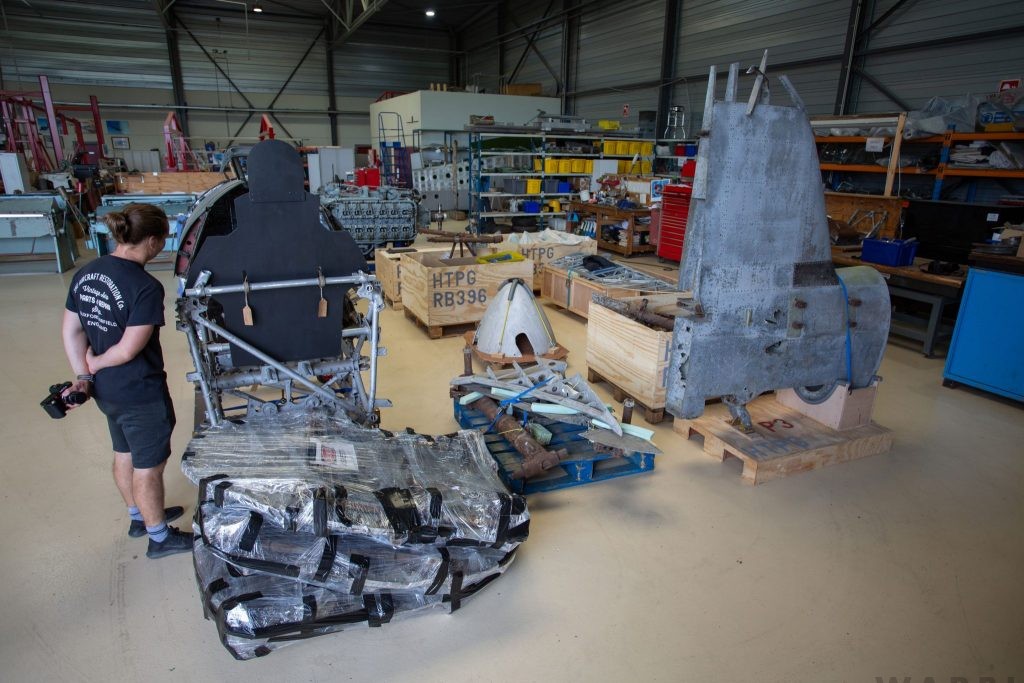 The recent successful crossing of the first £1million raised/pledged towards the project has brought with it a level of certainty regarding available finances, at least for the moment, and this has allowed a greater amount of forward-thinking that wasn’t possible previously when HTPG relied more heavily on the air show and merchandise revenue. Significantly more funding will be needed, of course, to complete the project, but the forward momentum is incredibly helpful.

The move to Duxford is a major milestone, the product of five years’ hard work in establishing the charity and project, not to mention securing significant quantities of parts from across the world. Each of these parts tells its own story and offers its own answer to a piece in this complex jigsaw puzzle. Furthermore, some parts purchases arrived with agreements allowing us access to specific tools such as jigs or fixtures which will be key to the restoration progressing economically. Now those agreements are about to be realized, the savings brought about by those purchases will come to fruition.

The move to Duxford was a real team effort as well and bears testament to the dedication present in the all-volunteer HTPG team who are consistently working together to keep driving the project forward and overcoming the many hurdles along the way. The project team looks forward to seeing work commence at Duxford, but one of the first details to arrange will be a visit to the workshop for the project’s supporters so that they can see, first hand, what their contributions have achieved.

Please do become a supporter and be a part of this unique story. Click HERE.