The Dutch Historic Jet Association’s Fouga Magister, registered F-GLHF, took to the air again for the first time in almost four years on Friday, May 5th. Kris van de Bergh, a Belgian Fouga pilot, made the successful 40 minute test flight from the aircraft’s home base at Lelystad Airport. The DHJA’s Fons Hemmelder acted as co-pilot from the rear seat.

The aircraft has just completed a significant restoration following a gear collapse during a ‘touch and go’ at Lelystad on June 27th, 2013. Luckily, no-one received injuries in that incident, nor did the engines suffer, but the lower fuselage took a significant blow.

The damage was severe enough that the Magister could have been permanently grounded, but after much debate with the insurance company, DHJA decided to proceed with repairs. They disassembled and trucked their forlorn Fouga to another Dutch airport at Teuge to get the work done. There, master sheet metal worker Louis van den Bos replaced several of F-GLHF’s lower fuselage ribs and associated fuselage skinning. For this, DHJA’s spare Fouga, former Belgian Air Force MT-37, served as both a parts donor and contour mould. The repairs were done by roughly mid-October 2016 and ‘Hotel Fox’ made her way by road back to Lelystad. After the necessary 2000 hour check, the aircraft received a fresh coat of shiny red paint. As the Fouga is still French-registered, an inspector from the French Aviation Authorities (DGAC) had to re-certify her airworthiness. Finally, on December 1st last year, the DHJA received the long-awaited CoA for their beloved F-GHLF. Unfortunately, the lengthy period of her grounding meant that all of the DHJA pilots saw their type ratings for the Magister expire. To tackle this problem, while simultaneously renewing their pilots’ their type ratings, DHJA hired a French pilot who is also a fully licensed Fouga instructor. But whether this training will take place is highly dependent on the European Aviation Authorities. Both the Dutch IL&T and the French DGAC are currently re-considering their vision on the operation of former military jet aircraft by private individuals or organizations. Hopefully future legislation will continue to enable the operation of historic jets, so the public will be able to enjoy aviation legacy in the years to come!

The Dutch Historic Jet Association began in 1997. A group of 24 Dutch pilots formed the initial cadre, led by Mr. Arjan Dros, a former Dutch Navy pilot, who later flew for Transavia airlines. According to their statutes, the Association formed to preserve vintage jets with a historic connection to the Netherlands. But in 1997, many of the most interesting types were either extinct or too expensive. Fortunately, the French Air Force came to the rescue when they retired large numbers of their Fouga Magister trainers at around the same time. It turned out that many of the DHJA pilots had a soft spot for the sleek French-designed trainer. Like Dros, most of them had enjoyed their first jet experience on the type.

Thanks to the close cooperation between the Belgian and Dutch Air Forces, Dutch pilots, at that time, flew Belgian Fouga’s. During their VVO (Voortgezette Vlieg Opleiding or Advanced Flight Training) at Brustem / St. Truiden, the Dutch Air Force and Navy pilots each gathered some 150 flying hours on the type. So for the DHJA, picking the Fouga Magister for their group was a natural choice. They acquired their first example from Britain in 1998. They transported this aircraft, G-FUGA, to Beek (now Maastricht-Aachen airport). But while the aircraft was basically airworthy, it really needed a thorough overhaul. The recertification process was also more difficult, because much of the official paperwork had gone missing during the aircraft’s move to the Netherlands. This made it necessary to compose new technical data files, which was especially time consuming. It wasn’t until 2006 that the aircraft received its French airworthiness certificate. Her new registration became F-GSHG. By then, the DHJA had moved their headquarters to Lelystad airport, in the central Netherlands. 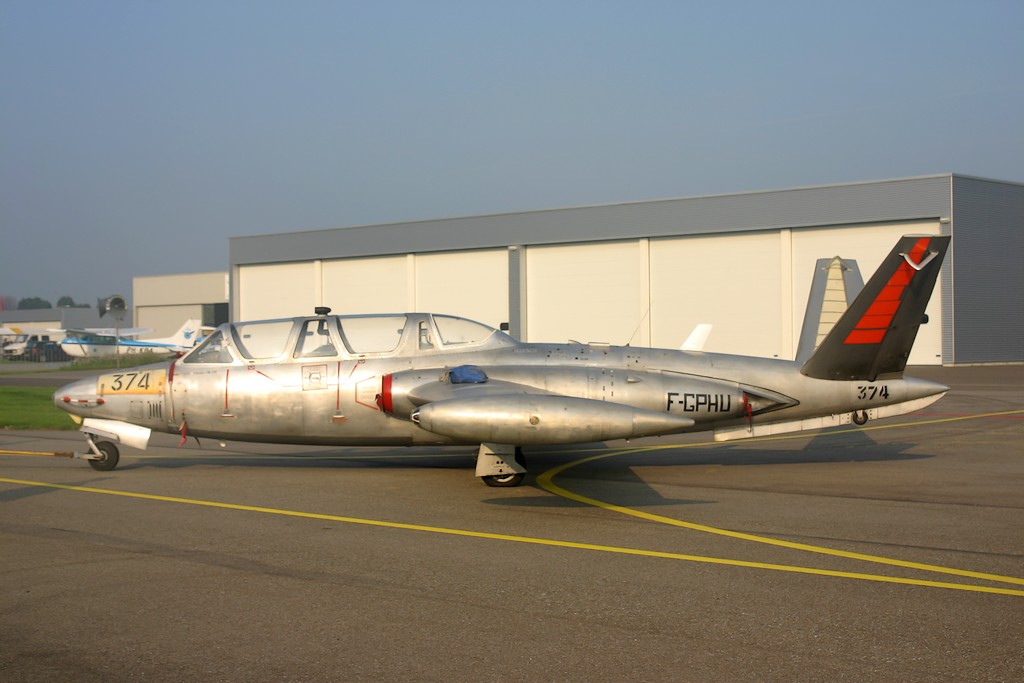 During the period when G-FUGA was under rebuild, the group bought three additional Magisters in France: initially F-GLHF, followed by F-WIGY and F-WIGZ, which both came from AMPAA at Etampes in 1999. Of these aircraft, only F-GLHF is still with the DHJA. They do have one other Fouga as a non-airworthy spare however: former Belgian Air Force MT-37. After a landing accident at De Kooy Naval Air Station in September 2007, F-GSHG went to the (now) National Military Museum at Soesterberg, where it can be seen as Belgian Air Force ‘MT-51’. After their arrival in the Netherlands, F-WIGY (331) and F-WIGZ (374) soon took new registrations as F-GLHO and F-GPHU respectively, but after some years in storage, the DHJA decided to dispose of them. They sold F-GLHO to a French enthusiast in Valenciennes in 2005, which became F-AZTO following a complete restoration. It is now flying from Valenciennes-Denain. The DHJA sold F-GPHU in 2007 to Niels Egelund of Stauning, Denmark to serve as a spare airframe for his active example, OY-FGA. Parts of ‘Hotel Uniform’ ended up in OY-FGA after it received fire damage in Roskilde, but the airframe is still in storage at Stauning.

Many thanks to Gert Jan Mentink for providing this article and beautiful photographs to WarbirdsNews. We also really appreciate the fine aviation journal Scramble.nl for making this possible. It is gratifying to hear that the Dutch Historic Jet Association once again has a flying Fouga Magister. The next step will obviously involve getting the vintage v-tailed jet fully re-certified, and then begin the process of getting DHJA’s pilots current on the type again. Hopefully this will all run smoothly, and we can all look forwards to seeing this beautiful and charismatic aircraft on the air show circuit once more. Congratulations to all involved!