We have just received the June/July, 2022 report from Chuck Cravens concerning the restoration of the Dakota Territory Air Museum’s P-47D Thunderbolt 42-27609 at AirCorps Aviation in Bemidji, Minnesota. We thought our readers would be very interested to see how the project has progressed since our last article on this important project. So without further ado, here it goes!

This month, work on the final wing systems, fuselage details, and control surfaces continued. The cowling shape is is in the final stages of completion, and the windshield is now permanently attached.

Back in WWII, it was a common practice for factories to use an acid wash on areas of aluminum skin which were to be spot welded. As such, an accurate restoration must also include duplication of this acid wash, since it is very visible on the airframe.

The left flap and elevators were the final control surfaces to be finished.

Work on the wings this month centered  primarily upon the ammunition and gun bay doors as well as the landing gear. The team installed the landing gear gap seals, as the fitting on the gear doors was completed.

The nose cowling’s complex shapes make building this assembly difficult. Mike has made remarkable progress though, fitting much of the outer skin this month.

This month the team installed the cockpit windshield, along with the bulletproof glass which sits behind it. This installation is interesting in that, unlike most bubble canopy fighters, the armored glass is a separate part, independent of the windshield itself. It mounts inside the windshield, bolted to the front deck assembly over the instrument panel.

During the period from late May through mid-July, much of the work focused on the fuselage underside where the turbosupercharger and its associated ducting are located.

Before enlisting in the Army on December 3, 1942, Don had worked for a time as a railroad clerk for the Southern Pacific Railroad in San Francisco.

In addition to Don, three of his brothers also enlisted; Raphael and Robert served with the U.S. Army in the Pacific Theater, while J. Orton McKenna, like Don, joined the U.S. Army Air Forces.

Basic military and flight training during the war could take a considerable amount of time. In Don McKenna’s case, it would be almost 18 months before he was ready to ship overseas to join the fight in May of 1944.

Following completion of his course at Corsicana, Cadet McKenna moved to Enid, Oklahoma to begin Basic Flight Training. During ‘Basic’ fledgeling pilots moved on to more advanced aircraft like the Vultee BT-13 Valiant. These aircraft were larger, more powerful and faster than the primary trainers. Instrument and night flying were also part of the basic training program.

Foster Army Air Field near Victoria, Texas became Don’s next stop. Here, cadets received an introduction to faster, more complex aircraft during Advanced Training. At Foster, trainee pilots flew the North American AT-6 Texan, commonly referred to simply as the T-6. This trainer required significantly greater skill to fly, with features such as retractable undercarriage, a more powerful engine, a variable-pitch propeller, not to mention hydraulic systems. Those who mastered the AT-6 would then move on to specialized training in fighters, bombers, transports, etc.

Interestingly, one of the resources which would have been in heavy use at Foster Field just happens to have been added to AirCorps Library’s vast aeronautical library this week, the “Instructors Manual for Advanced Single-Engine Flying”; T-6 Texans feature heavily in this fascinating document! 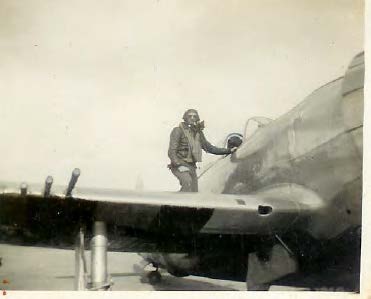 Don on a Thunderbolt’s wing. Photo courtesy of Dan Sokolowski

While at Bruning, Don experienced an incident. Forced to delay his landing due to a busy traffic pattern on a nighttime training flight, his aircraft ran out of fuel; Don had to belly-land the Thunderbolt onto a field. Thankfully the rugged P-47 kept him safe from injury. Despite the accident, his subsequent training proceeded normally until he was ready for combat.

One of McKenna’s fellow trainees at Bruning, Billie Snell, became his best friend during that time, and the two men flew and fought alongside one another throughout their time on the front lines.

Donald went overseas in May of 1944, crossing the Atlantic aboard the RMS Queen Mary with his friend Billie Snell. (Oddly enough, the two men returned home after the war aboard the same vessel!)

Both men joined the 367th Fighter Squadron of the 358th Fighter Group, a 9th Air Force P-47 unit. After a while, both men gained enough seniority to be assigned a P-47 which they could add their own personal nose art to. The two men chose designs which related to their personal backgrounds. In Don’s case, this was the Iowa cornfields , while Billie focussed on his native American heritage.

The 358th Fighter Group P-47s were originally part of the 8th Air Force, but when it became clear that the P-51 would serve as the primary escort fighter due to its superior range, the 358th joined the 9th Air Force in exchange for a 9thAF P-51 unit, the 357th Fighter Group.1

With the 9th Air Force, the 358th FG was awarded three Distinguished Unit Citations, and the French Croix de Guerre with Palm for the part they played in the liberation of France and their support in pushing Axis forces back across the Rhine River.

After D-Day, and throughout 1945, 9th AF P-47 groups were primarily engaged in tactical support of the advancing Allied Armies. They were incorporated into the First Tactical Air Force, an ad-hoc, multinational outfit established in southeast France during November 1944 to provide air support to the Franco-American Sixth Army Group. Made up of bomber and fighter units from the American 9th and 12th Air Forces, the First French Air Corps and the Western French Air Forces, they operated until May 1945.2

The group’s ground attack support of the 6th Army was memorialized by a commendation.

Donald was awarded the Distinguished Flying Cross for leading a successful and dangerous ground attack mission to the area around Heilbronn in Germany on March 13, 1945.

On April 2, 1945, the 358th FG moved to a captured Luftwaffe base at Sandhofen, Germany. On the third day of operations from that base, (April 8, 1945 according to his Army Officer Notebook)3, Lt. McKenna shot down a Bf 109, describing the event to U.S. War correspondent Sgt, Jerry Peterson:

“I was leading one of the flights. We were briefed to dive-bomb Munich, when we saw four German planes in the vicinity of Crailsheim. The Jerries split up, and I chased one that started climbing.

He made meager attempts at evasion and then leveled out in a straight climb.

I closed in to 300 yards, firing short bursts. He smoked a little on the first, and on the third burst, his engine exploded and poured black smoke.

The canopy flew off as I continued firing. The pilot bailed out and the plane started spinning down from 19,000 feet. The German’s parachute didn’t open.”

During his time in combat, Don McKenna had two confirmed aerial victories, both Bf 109s, and a confirmed damage claim against an Me 262 jet fighter.

Lt. McKenna completed 135 combat missions during the war, his last being on April 28th, 1945 according to his Army Officer NoteBook.

He wasn’t an ace or a well-known name in the news, just another American doing his duty to keep the world safe from tyranny. We are lucky to have had so many like him during WWII; 16 million Americans served during that time and, like Donald F. McKenna, they rightly earned the honorific of “the Greatest Generation.”