WarbirdsNews has just received the February, 2019 report from Chuck Cravens concerning the restoration of the Dakota Territory Air Museum’s P-47D Thunderbolt 42-27609 at AirCorps Aviation in Bemidji, Minnesota. We thought our readers would be very interested to see how the project has progressed since our last article on this important project. So without further ado, here it goes!

Fuselage skin riveting was nearly finished this month and the tail cone has been permanently attached to the forward fuselage. A great deal of progress was also made on the cockpit enclosure.

The parts depicted this month are primarily cockpit parts with the exception of some tailwheel castings. The parts that are given priority are always an indication of what comes next in the restoration process.

The line of 5 identical sized holes allows adjustment of the cable tension by moving the pivot pin. The rudder pedal cable attaches to the single small hole that is furthest left.

Work continues on the cockpit enclosure this month. It is both remarkable and a little surprising that it takes 390 parts to make up this assembly that is so unique to razorback versions of the P-47.

It takes a strong engine mount to hold the well over 2000 lb. R-2800, and handle the vibrations and torque as it runs. Lance has been inspecting and restoring an engine mount. It is in pretty good shape, but needs repair on one of its steel tubes. 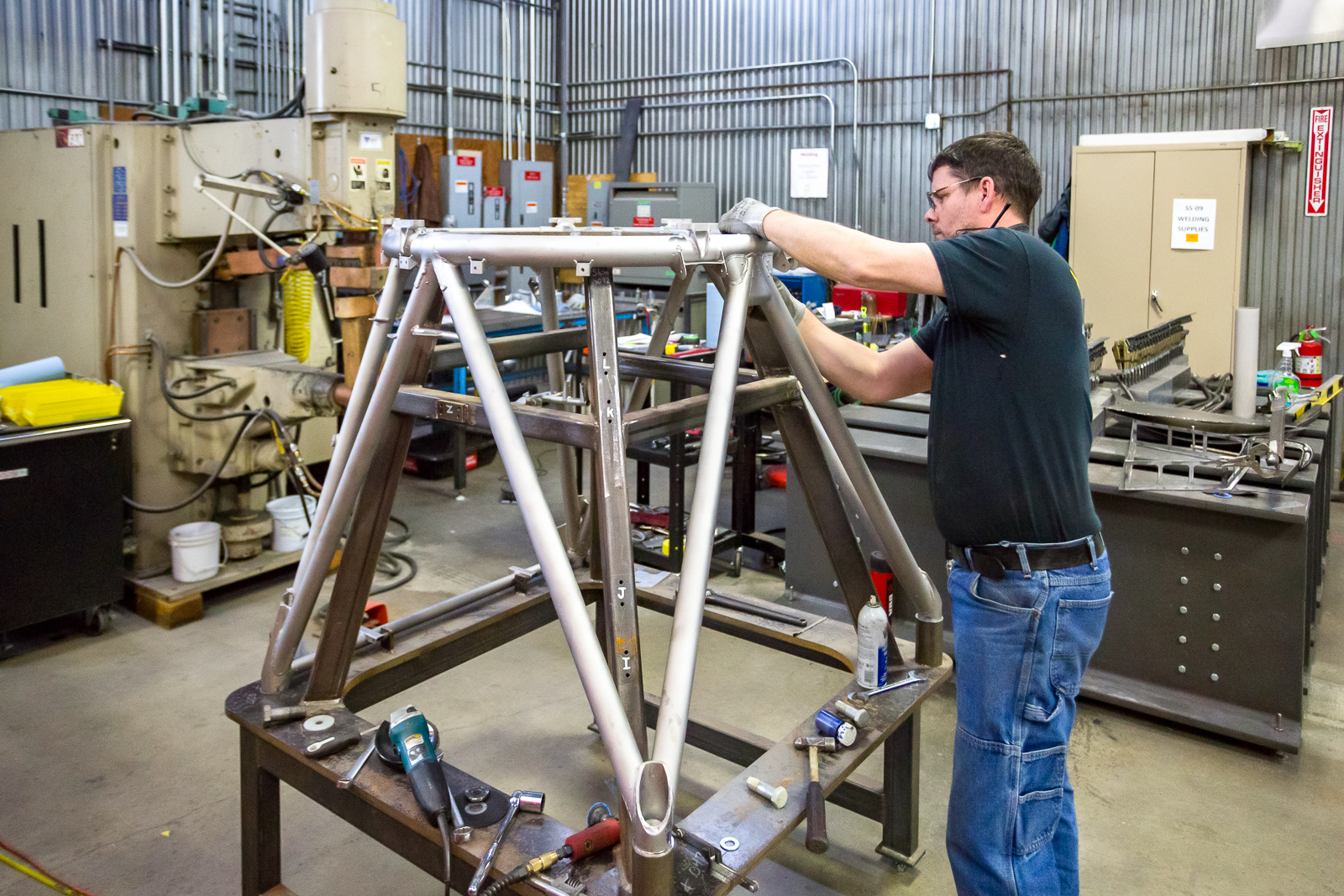 The fixture will keep everything perfectly aligned as Lance repairs the one tube that needs work. (photo by John LaTourelle)

As the fuselage gets more and more recognizable, it makes sense to highlight some of the differences between restoring a P-47 and a more common Mustang project. Towards that end, I interviewed two of the guys doing the work.

A P-47 is a challenge to restore in large part because of its size and complexity. That matters, but an even bigger challenge is Republic’s unique methods for accomplishing various engineering tasks. There are far more North American warbirds still flying, so most restorers are familiar with, and more accustomed to the way things were done on T-6s, Mustangs and Mitchells.

Aaron pinpointed one of the Republic drawing conventions that differs significantly between the two manufacturers. In his opinion and experience, North American drawings are more complete and have better technical clarity.

For example, on an NA drawing, each different type of rivet is labeled each time it appears. That isn’t the case on a Republic drawing.

Randy described it best in an example: when he checks a Republic engineering drawing for detailed information on specific parts, rivets in this case, the drawing shows the rivets, but doesn’t have the size or type specification. Instead, he is refered to another drawing. This is normal for most WWII aviation engineering drawings from any manufacturer other than North American. However, when he examines the referred drawing, the rivets once again appear but the required information still isn’t there, and the restorer has to continue in a “reference chain” until he may find his information four or five drawings down the line.

Another example is the occasion when a drawing will have a label that says all rivets are 5/32 S-9757-5, except as otherwise noted. So every depicted rivet in the drawing has to be examined carefully to be sure to find those few that aren’t that size and type.

Rivet usage note from a P-47 drawing. It isn’t clearly legible and that is another issue in the restoration. (photo by John LaTourelle)Sometimes the drawings are simply ambiguous and a little confusing as in the note below:

I think it is a little ironic that this note is labeled as a clarification. As my grandfather used to say “it’s clear as mud”. (photo by John LaTourelle)

In comparison, on a North American engineering drawing, the reference generally takes the restorer (or original factory worker) directly to a drawing with the specific information that they need.

To quote Aaron on the difference, “A Mustang could be built with just the complete set of engineering drawings. It wouldn’t be ideal without some original parts as templates, but without those templates it would still be possible.”

He is convinced that this would not be possible with the P-47. It is a good thing we have a supply of original parts for templates and measurements.

The Thunderbolt’s interior structure also adds complications to the job. With so many passages for ducting and reinforcement plates, there are numerous very tight spaces for bucking rivets. These are created by inner and outer walled off areas, even though overall, the inside of the fuselage is cavernous. 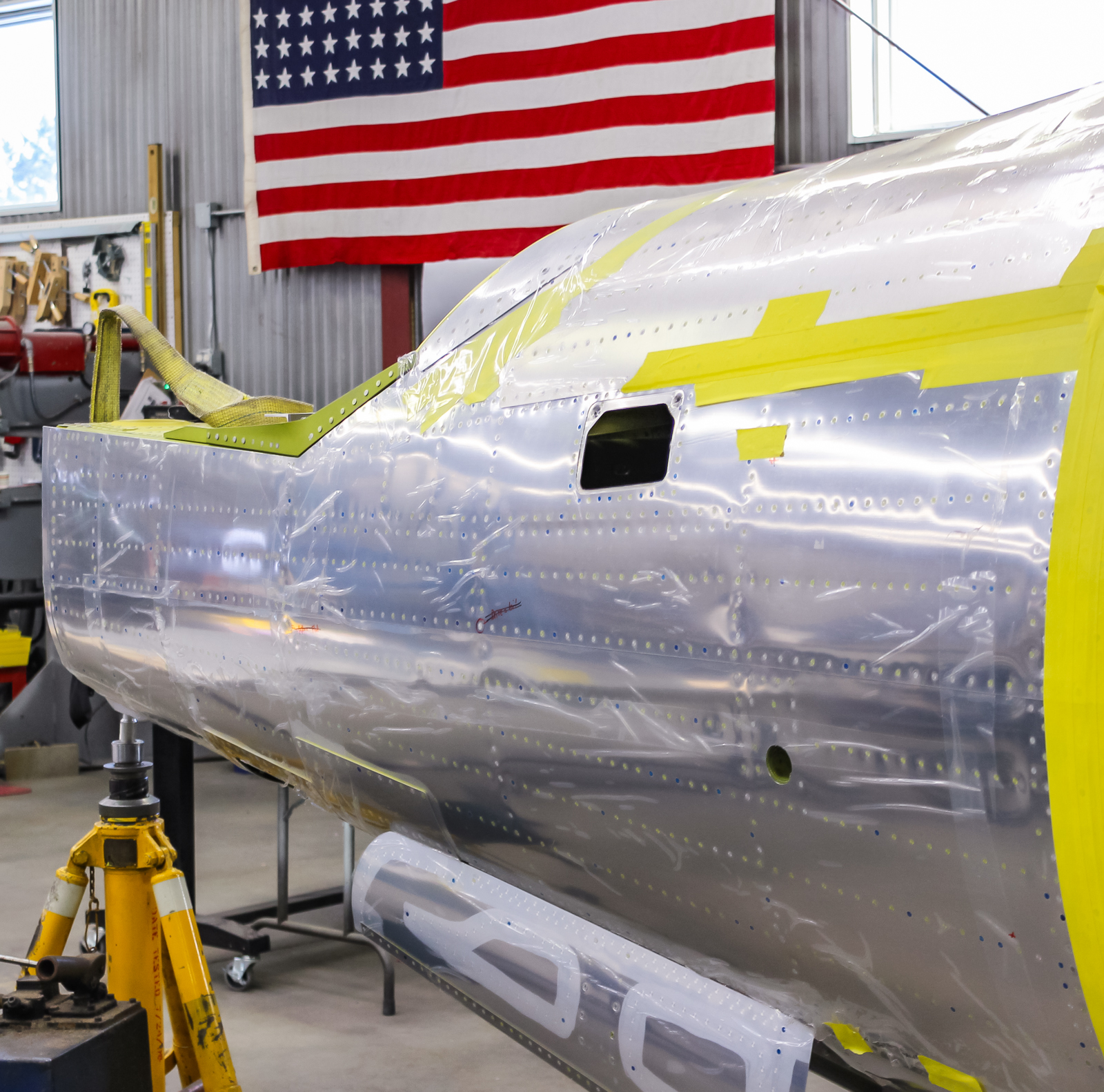 A Thunderbolt is, of course a much larger airframe than a Mustang, and many say that the P-47 is “overbuilt”. The guys pointed to the tail cone as an example. There are so many rivets in the tail cone that it seems to them that the number nearly equals the quantity in an entire P-51 fuselage. Though that may be an exaggeration, there are about three times as many rivets in a Thunderbolt as in a Mustang.

It is definitely a fascinating challenge to duplicate Republic’s famously rugged fighter.