Vintage Aviation News has received the October/November, 2022 report from Chuck Cravens concerning the restoration of the Dakota Territory Air Museum’s P-47D Thunderbolt 42-27609 at AirCorps Aviation in Bemidji, Minnesota. We thought our readers would be very interested to see how the project has progressed since our last article on this important project. So without further ado, here it goes!

The major news this month was the first engine run for our P-47 restoration. Finishing the details leading up to this milestone was the primary task during late October. The video below shows these engine runs, both before and after the cowling was installed…

The P-47D-23 was the last of the so-called ‘razorback’ Thunderbolts, those examples with the raised fuselage fairing behind the cockpit canopy.

The Evansville, Indiana-built P-47D-23 and their Farmingdale, New York-built equivalent, the P-47D-22, incorporated several changes from the earlier models. The most visible difference, of course, was that both variants now featured a 13-foot diameter, wide-blade propeller. While the D-22 used a Hamilton Standard Hydromatic 24E50-65 propeller, the D-23 employed a Curtiss Electric C542S. Interestingly, the Curtiss Electric units could use propeller blades with either symmetrical and asymmetrical profiles.

The new 13-foot, wide-blade props were designed to take full advantage of the increased power available from the Pratt&Whitney R-2800 engine with its water injection upgrade. However, the new propeller left only about 6 inches of ground clearance during take-offs and landings, which sometimes proved a problem!

Prior to the introduction of the new propeller variants, the P-47’s climb rate was not a strong point in type’s performance envelope, however the 400 feet per minute gain in this metric which the new, wider blade propeller provided was a marked improvement.

Another important improvement with the D-23’s introduction was the addition of a bulletproof windshield and jettisonable cockpit enclosure. Pulling a ring on the canopy’s right forward edge pushed the cockpit enclosure backwards far enough for the slipstream to grab hold and tear it from the airframe. The new variant also featured increased internal fuel capacity as well.

This month’s fuselage work involved finishing the connections to the turbosupercharger and preparing the engine and accessories for the first start-up.

The restoration team finished rebuilding the engine cowling this month and then mounted it to the Thunderbolt.

It is always an exciting moment when a restored warbird’s engine is run up for the first time. Our P-47’s test run was no exception. In fact, it was perhaps even more exciting than usual, considering the number of years and level of effort put into getting this unique warbird ready for such a memorable day.

Aaron Prince expressed this sensation well, stating: “It was a huge relief to see an airplane that I have been working on almost nonstop, run with very minor issues. It was also a surreal experience seeing the P-47 run for the first time in seventy-eight years, knowing the last time it ran was in New Guinea by guys my age in hostile conditions. It was also nice to share the experience with the whole team, without which this would not have been possible.”

A Special Part Included in the P-47’s Restoration

Many thanks to Hans Wronka for writing the following section. Hans, as some may recall, spearheaded a 12-year search for the WWII crash site of his grandfather’s P-47 in Italy. This culminated in the discovery and excavation of the wreck from beneath a field near Bologna.

“On October 26, 2022, a beautiful symbol of American ingenuity, tenacious drive, and steadfast ethic came to life again with its first engine start. This P-47 Thunderbolt is an example of the great and incredibly important things Americans can achieve when they are united in purpose and resolve when faced with existential threats to world peace built on hatred, evil, violence, and murder. Together as a society committed to working together, our ancestors began building the Arsenal of Democracy more than 80 years ago. With that Arsenal, the United States of America led the way in defeating evil and restoring peace and order over much of the world.

On a July day in 2016, I stood in a farm field near Bologna, Italy alongside three generations of my family. We were cleaning dirt off pieces of metal, glass, rubber, and other material that was being excavated from beneath the earth’s surface. The material had not seen the light of day since April 21, 1945, when a pilot, my grandfather, 1st LT. Loren Hintz was shot down in his P-47 Thunderbolt while on a combat mission during the final days of World War 2 in Europe.

At the time of the excavation, however, many questions remained unanswered including if we were even digging at a crash site and if we were, was this site where my grandfather made the ultimate sacrifice? Years of research and numerous serendipitous discoveries and encounters with key individuals indicated we were on the right track, but we were quite literally digging into the unknown.

At one point early in the day, my friend Eric Trueblood from AirCorps Aviation, who had joined us in Italy for the excavation, showed us a recovered piece of wreckage with a complete part number. Within seconds he was able to pull up a specific drawing from AirCorps Library on his phone. The drawing detailed exactly what the part was (the tail wheel uplock lever assembly) and confirmed that it was from a P-47 of the correct model type and dash block for the serial number of Loren’s Thunderbolt.

In some ways, I was caught off guard by such a definitive discovery. I simply had not given a lot of thought as to what finding anything other than an aircraft data plate or serial number from a machine gun would mean in terms of verification of what we were in search of.

The July day seemed to last forever. I recall wandering around the growing excavation with a surrealistic feeling as if I were in a dream. I was seeing everything unfold, but it also felt like I was removed from reality with a sense of being back in time when Loren was still alive, as if he would show up to see what everyone was doing.

The clattering of excavating equipment and excited and animated conversations in Italian going on all around me would snap me back to reality. Nonetheless, I continually had to keep telling myself that I was not in a dream and that it was good the day was lasting forever. I held airplane parts and wondered what they were, where they came from, who had last touched them, what assembly worker installed them, who the WASP pilot was that delivered the plane to a facility for shipment overseas, and so on.

Before sunset, four generations of my family were together in spirit and person. My mom was the first to hold her father’s dog tags after they were cleaned and gently handed to her.

She would do the same holding his bones before gently placing them in a small casket that had been provided by the local authorities. We stood around together as a family, hugging frequently, sharing some tears, and also thinking about the man Loren Hintz was and the family, especially his wife and children, whom he would not live to see. We took comfort in knowing he had lived a life of adventure, love, and happiness well before the war. Loren was also committed to defending freedom and defeating evil. He lived with no regrets.

In 2019 my family returned to Italy to inter Loren’s remains with full military honors at the American Battle Monuments Cemetery near Florence. Buried on one side of his grave was a black soldier from the 92nd Infantry Division known as the Buffalo Soldiers, on the other side lay a member of the 10th Mountain Division. 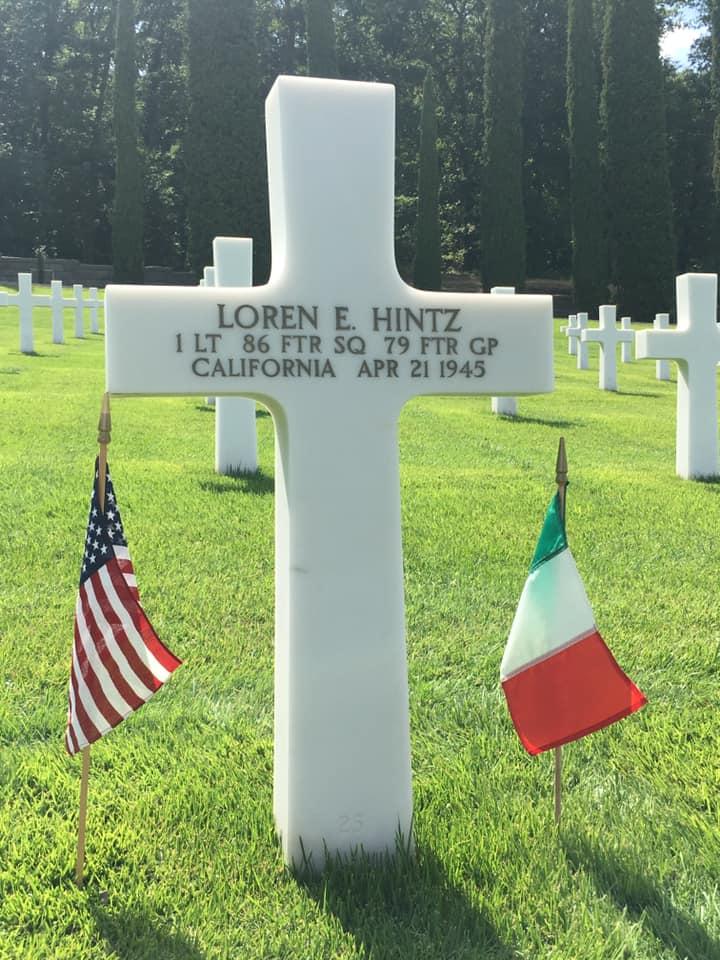 About a year after the excavation, my family was fortunate to be able to arrange shipment of some of the P-47 wreckage back to the States for an exhibit that shares the story of ‘Finding Loren’ and honoring his service and sacrifice. My friend Jordan Deters from the Commemorative Air Force Minnesota Wing and our adolescent sons were the first to uncrate the parts and pore over each one. Each part had been meticulously cleaned and conditioned for preservation. Many of them were easy to identify including the carburetor, a good-sized piece of firewall, the R-2800 engine, and so on. There were numerous handheld parts that were less distinctive that had not been cleaned in the field during the excavation, which meant we were seeing them for the first time.

Many of the Italians who had been so instrumental in supporting the Finding Loren project visited us in 2017. A highlight was introducing them during numerous public interest engagement sessions and presentations that were hosted by various organizations. At one such event at the Commemorative Air Force, a group of us were looking through some of the smaller less distinctive parts. I picked up a small aluminum part and asked one of the Italians who had been involved in cleaning and inventorying every single part of the wreckage that was recovered and asked him what it was. His response was immediate: “Ah, this is a very special part. It is the handle from the fuselage.” He explained exactly what the part was and where it was located. He even pointed out the small patch of olive drab paint on what was the exterior side of the handle indicating that Loren’s plane was painted as opposed to operating with a bare aluminum finish. Without a doubt, my grandfather Loren would have grasped that handle as he climbed aboard his ship. The feeling of touching an actual part that Loren had to have touched has carried special meaning with me ever since.

Eric Trueblood and I have stayed in touch throughout the impressive restoration of the ‘razorback’ P-47 at AirCorps. Over the last few years, we talked about how or if the possibility existed for incorporating some part from Loren’s plane into the P-47 that is here and alive again today. After considering options, we quickly agreed that this handle would be a fitting and functional part to include in the restoration. On behalf of my family, we are extremely grateful and honored that a part of Loren’s plane will once again take flight. Loren’s spirit and the spirit of those from the Greatest Generation are very much alive and will continue flying high for many years to come. Above all, the symbolic meaning behind this is incredibly moving.”

And that’s all for this month. We wish to thank AirCorps Aviation and Chuck Cravens for making this report possible, and look forwards to bringing more restoration reports on progress with this rare machine in the coming months… and, hopefully, news of the aircraft’s first flight!