It has been some time since our last status update on former U.S. President Dwight D. Eisenhower’s Lockheed VC-121 Constellation, Columbine II. The ex-US Air Force executive transport has been undergoing restoration at Dynamic Aviation following its arrival at the company’s headquarters in Bridgewater, Virginia on March 23rd, 2016. After the sad and untimely loss of the company’s founder, Karl Stoltzfus, in late November, 2020, the project underwent a period of reassessment, but we are happy to report that work has since resumed and that a lot of progress has occurred in the interim. The following edited report comes from Dynamic Aviation’s restoration team…

The ‘First Air Force One’ is in the process of having all four of its original R-3350 engines overhauled and updated. As part of a reliability and safety package, plans include having a fifth example on hand as a spare. Anyone operating R-3350s in the present day must use 100 octane avgas, which allows the engines to produce around 2,500 horsepower each. Of course, these engines were once capable of producing significantly more power with the higher octane fuel produced in the era of their manufacture, but such mixtures have not been available for decades due to their exceedingly high toxicity. Even so, the combined effort of the four engines on First Air Force One will generate nearly 10,000 horsepower, which is more than adequate to propel her anywhere in the country in service of our nation.

Describing his experiences in the type, retired Constellation flight engineer Bob Trumpolt noted: “Every flight is a great adventure. Picture this – it’s night, the engines are brought up to takeoff power, a mighty roar, and a yellow stream of fire reaches back from those big [exhaust] stacks. As the power is reduced for the climb, the fire stream begins to crawl back in. Later, as power is further reduced for a cruise, the engine roar subsides, props are fine-tuned to a smooth hum, and the short flame pattern turns a pretty blue. Now it’s time for the approach to landing; flaps and landing gear are extended and power is increased to a loud rumble with those mighty props digging in and suddenly a small blue flame leaps out in a long yellow trail of fire. Wow, a loud and visual display of ‘thunder and lightning’ as Connie makes her final prep for landing!”

The Lockheed Constellation, one of the most visibly striking aircraft designs of its day, became a legend during its service life, offering fast, safe and reliable travel during the post-WWII period. The civilian version evolved from the U.S. Army Air Force’s C-69 transport, which first entered service in small numbers during mid-1943. In 1951, while serving as NATO’s first SACEUR (Supreme Allied Commander Europe), then-General Dwight Eisenhower regularly flew aboard a U.S. Air Force VC-121 Constellation (48-0614) which soon gained the nickname Columbine, Colorado’s official state flower, in deference to Eisenhower’s wife, Mamie, who spent much of her childhood in Colorado Springs. When Eisenhower became president in January, 1953, he again had a Constellation serving as his personal transport, VC-121A 48-0610. This is the aircraft which came to be known as Columbine II, the first presidential aircraft to use the call sign Air Force One.

Dynamic Aviation intends to restore First Air Force One’s interior to appear as it once did during the Eisenhower era. All of the aircraft’s major systems, components, and fixtures will be addressed regarding their safe operation, but the cabin will become the most significant aspect for the public to experience when they visit. Dwight and Mamie Eisenhower’s granddaughter, Mary Jean Eisenhower, has provided an exceptional collection of family photographs which will allow us to add detail to Columbine II’s historical record and offer a near-perfect representation of the former President’s aircraft.

The fuselage interior begins at the cockpit, naturally, located in the aircraft’s nose section. Immediately behind the cockpit, you will find the flight engineer’s station, then the navigator, radio officer and crew compartment. Moving further aft, the galley provides food services for the crew and passengers along with storage and a lavatory. This leads into the main cabin, or passenger compartment, which served as the working environment with staff seating, tables, and a conference space provided. The seats can fold down into a ‘lower berth’ configuration as a sleeping area for long-distance flights. In addition, four upper berths were fitted into overhead compartments, which could fold down for additional sleeping arrangements.

President and Mrs. Eisenhower had a private stateroom to the rear of the passenger compartment. Including their dedicated aft lounge and bathroom, their personal section of the aircraft is almost twice as large as the passenger compartment. The stateroom included large, comfortable couches, desks and working areas. President Eisenhower’s famous ‘Atoms for Peace’ speech would likely have been written here. The President also had access to a special ‘call button’ here, a very modern feature for the time which allowed him to place telephone calls to anywhere in the world when the plane was on the ground.

Despite the enormous effort to recreate the First Air Force One’s Presidential interior, some of the Constellation’s original systems, such as its cabin pressurization equipment, have been omitted from the airframe as it moves towards becoming fully operational. While the Constellation was one of the first civilian airliners to feature such a system, the pressurization gear is both heavy and difficult to maintain. It is also irrelevant to Columbine II’s future use since the aircraft will not participate regularly in long-haul flights nor have any need to fly at higher altitudes to clear bad weather; the restoration team therefore reduced the aircraft’s  weight and operating expenses by deleting irrelevant equipment.

Dynamic Aviation’s history in the aerospace sector spans nearly a century. First Air Force One is one of many successful vintage aircraft restorations they have undertaken over the years. For instance, the company restored a 1943 Douglas C-47/DC-3 named Miss Virginia with a similar attention to detail and precision, which allowed the aircraft to cross the Atlantic Ocean in 2019 to participate in the 75th anniversary of D-Day in Normandy, France. With their new project in hand, Dynamic Aviation personnel have put a lot of hard work, value, and care into Columbine II… all for a noble purpose. Restoring historic aircraft helps to preserve our history for future generations to learn from and enjoy!

For those interested in learning more about the First Air Force One and supporting the restoration, visit www.firstairforceone.org 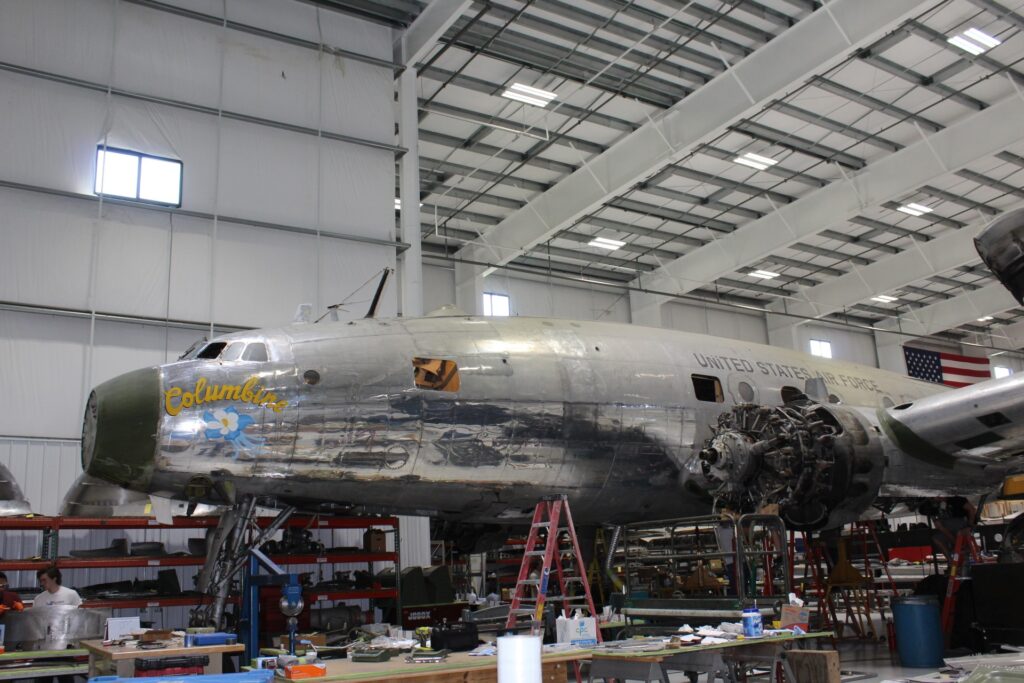