Back in November 2019, we published a story about the Commemorative Air Force’s Highland Lakes Squadron having received an incredibly generous gift from one of their supporters, Karl Ritter of Brady, Texas. Ritter donated his Douglas Dakota Mk.IV to the group, an aircraft which served in Britain’s Royal Air Force during the tail end of WWII as KP224, and post war with the Royal Canadian Air Force (RCAF). Now nicknamed Texas Zephyr, the aircraft sports a mirror-like, bare aluminum finish. As many will remember, the Highland Lakes Squadron had been seeking a replacement for their previous ex-RAF Dakota (KN270), known as Bluebonnet Belle, which was consumed by fire following a takeoff accident in July, 2018. (Interestingly, both Texas Zephyr and Bluebonnet Belle served post-war in RCAF No.435 Squadron.)

Texas Zephyr needed some significant maintenance before she could fly again, and Karl Ritter felt that the Highland Lakes Squadron was perfectly equipped to achieve this aim, since the unit had already gained a lot of experience from the 1000’s of hours they had previously had devoted to both restoring and maintaining Bluebonnet Belle. Originally, the team had expected to have the Zephyr up and flying again by the summer of 2020, hopefully in time for the Bluebonnet Air Show which was then scheduled for September 26th, 2020… but we all know, sadly, how everyone’s plans were upended the world over in March, 2020 with the onset of the pandemic.

Supply chain issues and labor shortages related to the COVID-19 pandemic caused lengthy delays to the aircraft’s extensive restoration needs, but Texas Zephyr is now on the home stretch in Brady, Texas. She is now scheduled to arrive at her new home with the Highland Lakes Squadron in Burnet, Texas on September 15th, 2022; members of the Squadron are elated to be so close, finally, to bringing their new Dakota home. 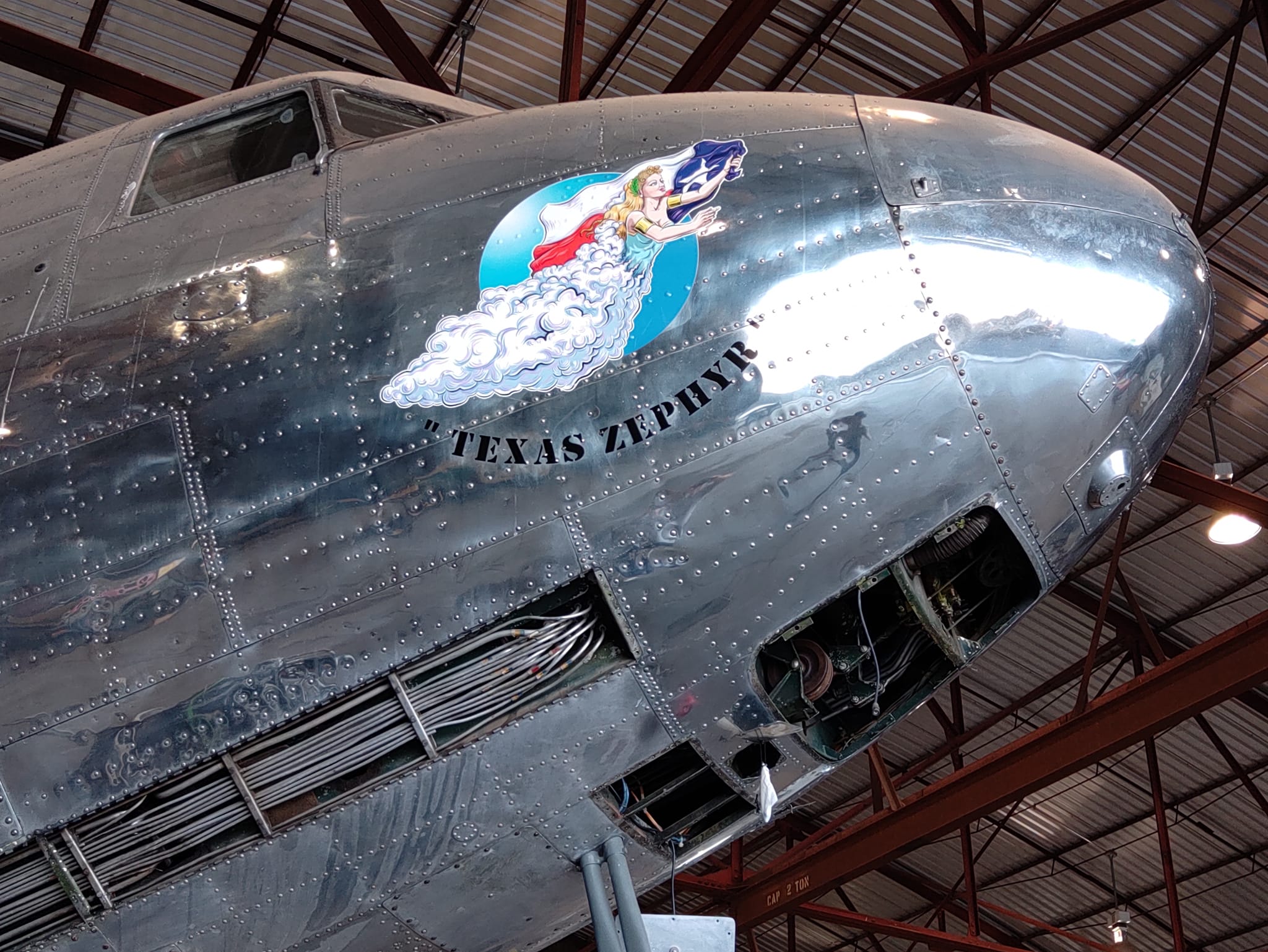 Part of this restoration effort has involved the Highland Lakes Squadron restoring one of the aircraft’s engines, while the CAF Central Texas Wing graciously loaned them a matching C-47 engine to get Texas Zephyr back in the air. Highland Lakes Squadron Executive Officer Kirk Noaker says his goal is to have Texas Zephyr flying in the group’s next Bluebonnet Airshow, which is presently planned for March 18th, 2023.

Texas Zephyr has an interesting history. The aircraft rolled off the Douglas factory line in Oklahoma City, Oklahoma as a C-47B-35-DK Skytrain (USAAF serial 44-77109) during the spring of 1945. While the US Army Air Forces accepted her on June 7th, 1945, they transferred her, within days, to Britain’s Royal Air Force, where she officially became a Dakota Mk.IV, serial KP224. The Dakota arrived in the UK on June 18th, just a few weeks after the war in Europe ended. Her first operational unit was 77 Squadron, which she joined at RAF Broadwell, near Burford, Oxfordshire on August 29th, 1945. The squadron was working up for a posting to India at the time, but KP224 didn’t make that journey, transferring at the end of September to 436 Squadron, a Canadian unit which, ironically, had itself only just returned from the Indian subcontinent.

In March 1946, the Dakota transferred to another Canadian unit, 435 Squadron, which relocated to Edmonton, Alberta on April 1st, 1946. KP224 officially becoming an RCAF aircraft a few days later on April 7th, 1946. The aircraft moved through two further RCAF units; 440 Squadron in Winnipeg, Manitoba, then 429 Squadron at the same base. While many aircraft retained their earlier RAF serial numbers within the RCAF, some did get updated to the Canadian format if they stayed in the nation’s service long enough. Such was the case with KP224, which gained her new Canadian military serial number, 12905, in 1970. She retired from the Canadian military during the seventies though, and joined the civil registry as C-GSCB on March 1st, 1977.

She then began a life with various Canadian civilian cargo outfits, such as Air BC in Richmond, British Columbia and Skycraft Air Transport in Oshawa, Ontario. In August, 1994, the Dakota moved south of the Canadian border and joined the U.S. civil registry as N346AB, moving to Falcon Aero in Fredericksburg, Texas. Karl Ritter official became her owner in April, 2007. She flew on the air show circuit as the Spirit of Hondo, when based out of Hondo, Texas, but later became Texas Zephyr. 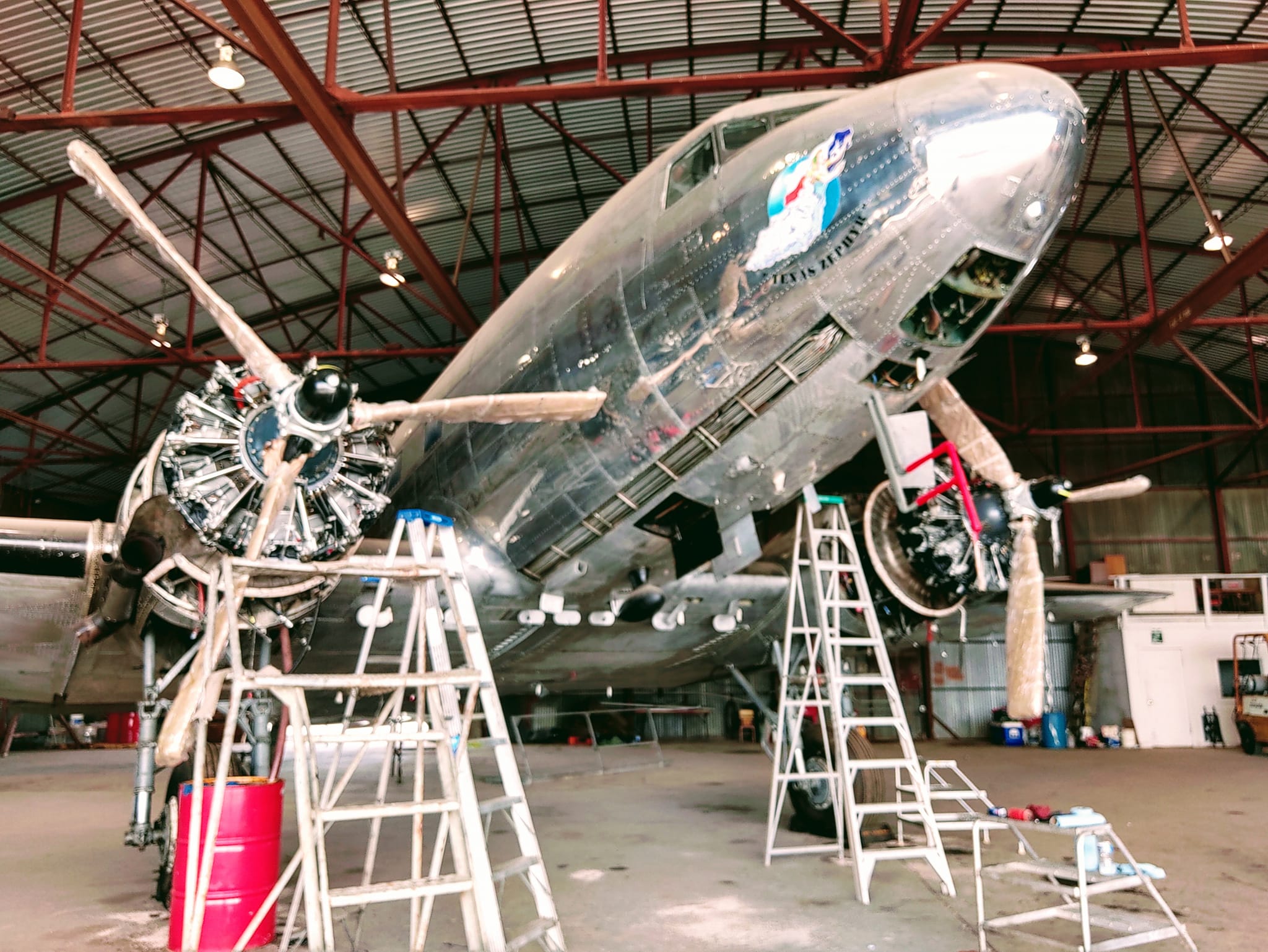