It has been some since we last reported on the progress which Greg Batts has been making with the CAC Boomerang restoration projects in his workshop, Combat Aircraft Constructions Pty, located in the Brisbane suburb of Archerfield in Queensland, Australia. Regular readers will know that the first flight of Greg’s personal project, CA-12 Boomerang A46-54, has been imminent for some time. We will begin with a report on that airframe.

Batts has completed numerous tasks on A46-54 in recent weeks to ready the fighter for its imminent first flight since WWII, but as we all know the devil is in the details. Indeed, many small detail items once listed on the workshop whiteboard have taken some time to resolve, let alone the major task of fitting the wooden monocoque over the fuselage’s internal tubular-steel frame. With that job now finished, Batts has been able to begin fitting the myriad panels and fairings, as well as the radio rack, canopy, and windscreen. However, problems with the pilot’s seat have required its removal for correction and reinstallation, consuming more time.

All of the electrical, hydraulic, fuel and instrumental fit-outs are now complete and, with the aircraft essentially done, a systems testing program has begun, with hydraulic extension/retraction trials for the landing gear, wing flaps, and cowl flaps having taken place so far. A video of the gear retract tests is viewable below…

With the whiteboard checklist essentially down to the final test flight program now, Batts plans to remove the aircraft’s outer wing panels so the airframe can make the journey by road some seventy miles west to Toowoomba Airport. Here, Batts’ team will reassemble the fighter, bolting on the outer wings and ailerons, fitting the propeller assembly, calibrating the fuel tanks, and performing weight and balance. The next phase will require an airframe inspection by an independent, certified engineer. With final testing and inspections done, Batts will perform engine runs and, if this succeeds, the possibility of an imminent first flight arrives. Speaking of this, Greg Batts noted, “I have no idea how long the process will take to get to the first flight day, but it will happen someday, hopefully soon!”

A46-54 is finished in a different color scheme than the two presently airworthy Boomerangs (CA-13 A46-122 and CA-12 A46-63) . The aircraft’s upper surfaces are finished in Foliage Green, with Sky Blue underneath. The fighter’s Squadron letters are hued the Medium Sea Grey of early Boomerangs. This all makes the aircraft very distinctive – the chosen livery will make for an attractive and interesting comparison when A46-54 is displayed at air shows and ceremonies in the coming years alongside her peers.

Regarding his progress with the aircraft, Greg said, “I have been extremely fortunate to have my good friend and LAME Steve Orwin assisting me over these many years. His knowledge on the older warbirds has assisted greatly.” We will be there when this ‘Aussie’ aircraft takes to the air again. While the exact timing is uncertain, Batts hopes it will take place within a couple of months.

Whilst visiting the Batts’ workshop, we were also able to view progress on two other CA-12 Boomerangs, these being A46-77 and A46-55.

The center section for A46-77 has been largely completed since our last visit; it is nearing a stage where it can be again mated with the fuselage, which is also progressing well. The center section reconstruction is based upon an example stripped from a Boomerang cousin, a North American Harvard Mk.IV. It is a complex task involving many labour hours to transform it into one fit for a Boomerang, so it is great to see this phase nearing completion. A new set of retracting ram outriggers are under construction presently; once fitted, the fuel tanks will then be able to go in and get hooked up, which will allow the subsequent installation of the tank bay doors for final fitting. 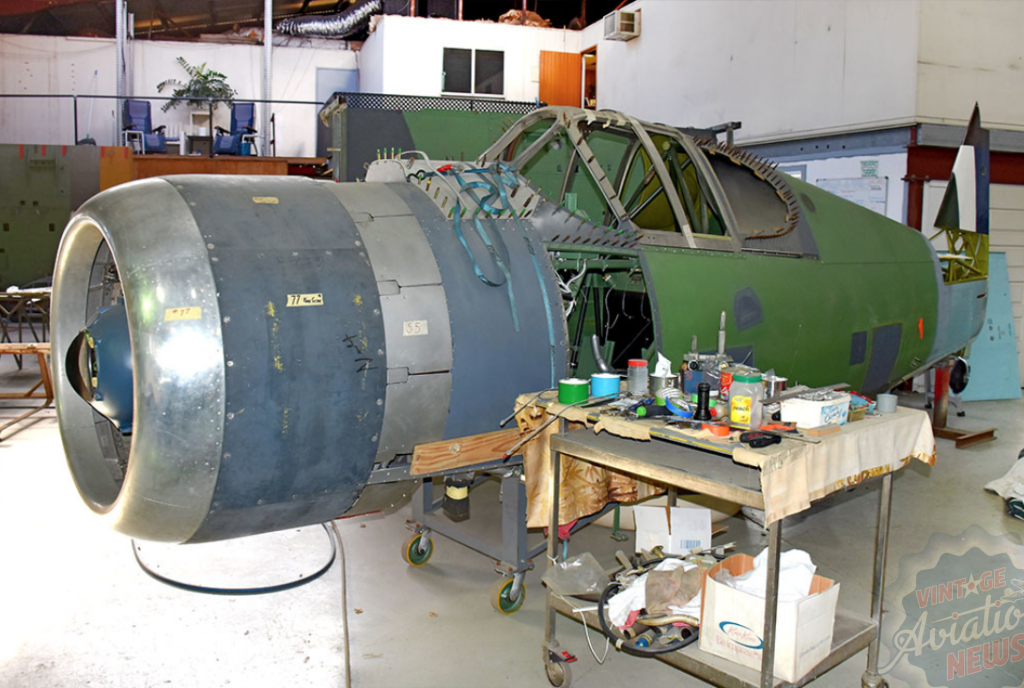 During our visit, the freshly repainted vertical and horizontal stabilizers were fitted to the fuselage, indicating that significant progress is happening with this project. The rudder and elevators are ready for fabric application too. At the current pace, this Boomerang should be up on its wheels in the next couple of months, and then final fit-outs will be able to occur. The main fuselage fuel tank is currently undergoing work; that will need fitting prior to the center section going under the fuselage. Even so, it is clear that this Boomer will soon join the active fleet of these great Australian fighters!

A46-55, another of Greg’s own aircraft, has also advanced significantly in the interim since our last visit. This example is one of the types most original survivors and, as such, is quite the time capsule. A lot of this aircraft’s components came with the project when Greg Batt’s acquired it, which will make the Boomerang’s restoration that much easier since fewer parts will need sourcing.

The forward fuselage frame is now cleaned and primed and is currently going through X-ray evaluation to check for cracks and corrosion. Surprisingly, Batts’ found that it is in better condition than most other surviving Boomerang frames and requires only  minor repairs before it is ready for reuse. The fuselage’s rear steel-tube frame will soon go through the same inspection process. The lower monocoque pan which fits under the rear tubular fuselage frame is currently in the jig for a strip down, inspection/repair, and reassembly. The fighter’s nose cowling is also under construction. A brand new (never-fitted) Harvard Mk.IV center section is already in the workshop and awaiting conversion for this Boomerang project. A46-55’s complex wooden fuselage monocoque is already complete and ready for fitting when the time arrives. A46-55 will fill the void in the workshop once A46-54 moves to Tawoomba for flight trials; work on the airframe will certainly speed up after that, but there are already visible signs of great progress!

The other Boomerang at Combat Aircraft Constructions is CA-12 A46-92, but little if any progress has been made with this airframe so far. This rather historic Boomerang received battle damage during operations with No.4 Squadron RAAF while leading a flight of U.S. Army Air Forces P-38 lightnings over Papua New Guinea. The aircraft is presently relegated to a corner at the back of the workshop; it has lain under a tarp since 2019. Given the full-court press to get A46-54 into the air, A46-77 up on its wheels again, and A46-55’s restoration accelerated, it would appear that A46-92 may not see additional progression for some time to come, given the current workloads and future time constraints at Combat Aircraft Constructions. Regardless, it is great to see so much movement with Australia’s only indigenously designed combat aircraft to see action in WWII.

We extend much thanks to Greg Batts and the team at Combat Aircraft Constructions for allowing us access to this unique warbird restoration facility and look forwards to our return in the not-too-distant future!

Many thanks indeed to John Parker for permission to reprint this article. To see more of his reports, please do visit his excellent website Warbirds Online.