WarbirdsNews has received the latest installment from the restoration team working to return “Champaign Lady” back to flying condition. The Boeing Flying Fortress, based around the remains of B-17G serial 44-85813, is coming together in leaps and bounds now, following nearly a decade of hard work repairing/remanufacturing the various components and subcomponents. The team has chronicled their latest endeavors so well, we felt our readers would enjoy reading them too… so here is their latest update!

Spring is the season when our clocks are set forward, and in that spirit, Champaign Lady is moving forward as well. March, 2014 sees the volunteers at the Champaign Aviation Museum in Urbana, Ohio, making terrific progress on Boeing’s iconic bomber. Under the direction of David Shiffer and Randy Kemp, the orchestra of volunteers are making the hangar sound like a symphony hall, although the instruments are drills, milling machines, and rivet guns.

From nose to tail, and wingtip to wingtip, sections of the airplane are growing. Among the most complex parts are the engine nacelles. These four parts, when mounted on the wings, will be the equivalent of aluminum icebergs: what you see on the surface is less than 5% of what is actually there. The nacelles enclose and streamline the engines, mounts, generators, hydraulic pumps, accessory drives, the cowl flap mechanisms, cables, hoses, pulleys, air inlet, exhaust and turbocharging systems. While it is a challenge to build just one, the volunteers have four to complete and, of course, each one is different. Their construction, and the techniques developed to build them have been daunting. Yet, despite the trigonometry involved, each week sees more and more pieces installed as they seemingly evolve into the proper shape. Even in their unfinished condition, it is easy to see why 14,000 hours has been invested in their manufacture to date. 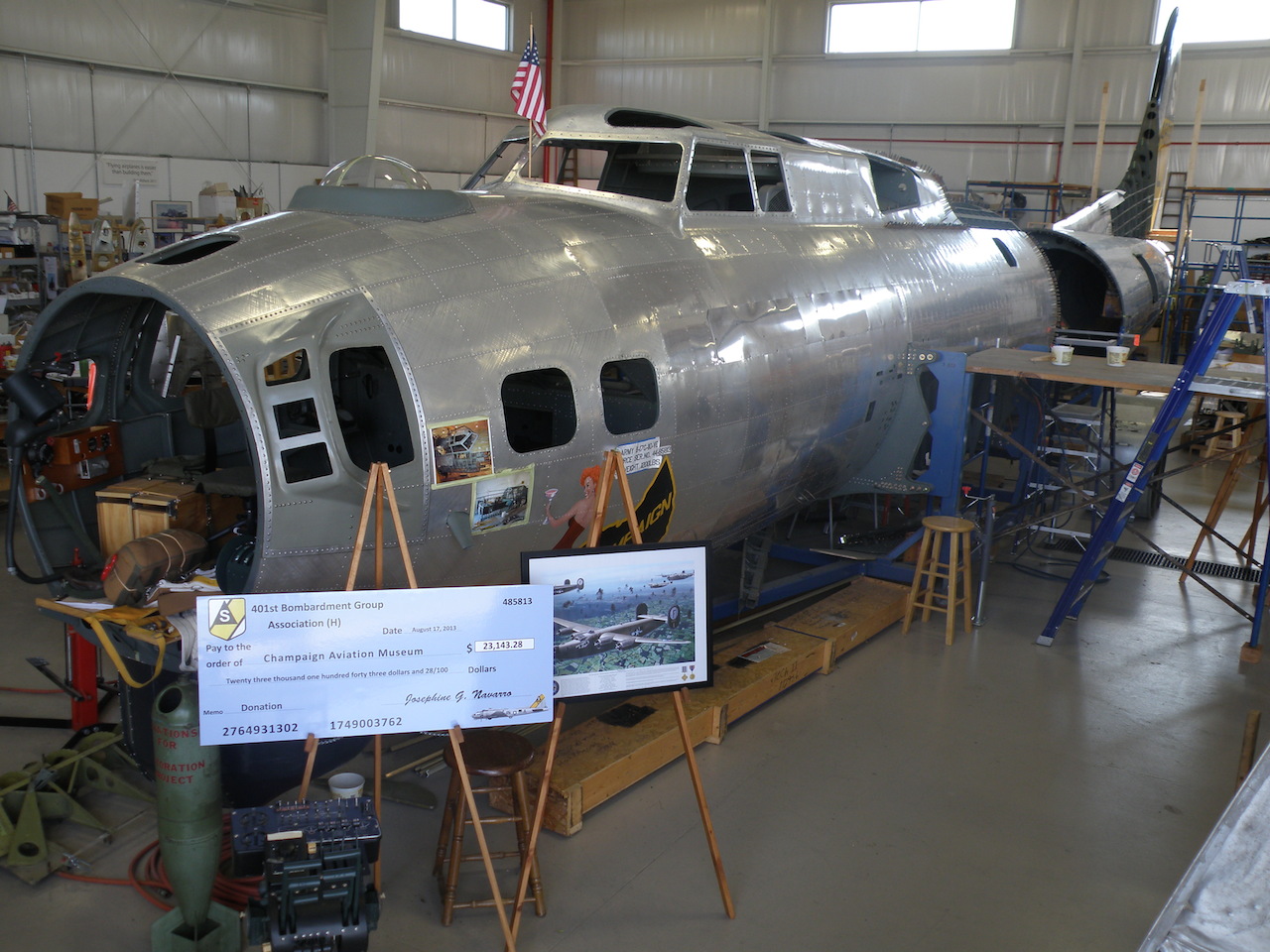 The inboard nacelles are well advanced. Approximately 75% of the framing is complete and the process to lay out, create, and form their skins is beginning. Like the majority of the airplane, the nacelles will be brand new. Randy and the volunteers had to develop a concept in order to make them. They determined the most reasonable way was to build them vertically, firewall down, and suspend the various stations moving aft. The nacelles “grew up” on a fixture that was loosely termed the Christmas Tree. Not only did this fixture have to provide precise datum points, it had to be removable once each nacelle was self supporting. The “firewall down” method also provided the maximum access for everyone involved in the process. As seemingly light as they appear, the nacelles will have to support quite a lot of weight. The engine, accessories and propellers will tip the scales at slightly more than a ton per nacelle.

Clearly, nacelles need a wing and Champaign Lady’s wing program is well underway. The spars are the foundation of each wing, and there are eight spar assemblies in each wing. The second spar assembly is now being set into its fixture, the first one was completed in early March. Each spar is made up of an upper and lower spar tube, joined in a manner resembling a Pratt truss bridge. This produces a wing that is relatively light but one, as we know, that can carry enormous weight. The spar tubes are among the very few original pieces that will be in the wings and, indeed, having these tubes was one of the reasons this project is possible. At first glance, they appear to be steel tubes of a box type cross section, but a closer look reveals considerable engineering and machining subtleties within. Attempting to reproduce them today would be extremely costly, if indeed any machining company would agree to try.

The spar tubes taper in cross section and wall thickness from root to tip and they have an internal “tunnel” which also slightly tapers. The spar cap and other attachments are retained by countersunk rivets which require bucking. The tunnel provides a means to insert a bucking bar, comprised of two reciprocal wedges attached to two twelve foot long rods. As the person handling the rivet gun fires away, the person doing the bucking pulls one rod against the other which vertically expands the wedges and bucks the rivet. This is the method originally used. The difference is in the inspection process.

When a B-17 spar assembly was built in the 40s, a telescope and mirror were used to inspect the rivets. Today, this critical task is done with a borescope, which feeds images to a dedicated computer. During and after bucking, each rivet is inspected—remotely–by video. The images of each rivet are also filed electronically in case any of them needs to be “pulled up” for inspection at a later date.

Interestingly, the museum staff refers to a Bureau of Aeronautics book published by the International Textbook Company, which provides reference information on spar riveting techniques. Published decades ago, this book combined with the electronic imagery, inspection, and filing techniques of today, is a terrific application of 21st century technology being used to build an airplane from the 1940s. 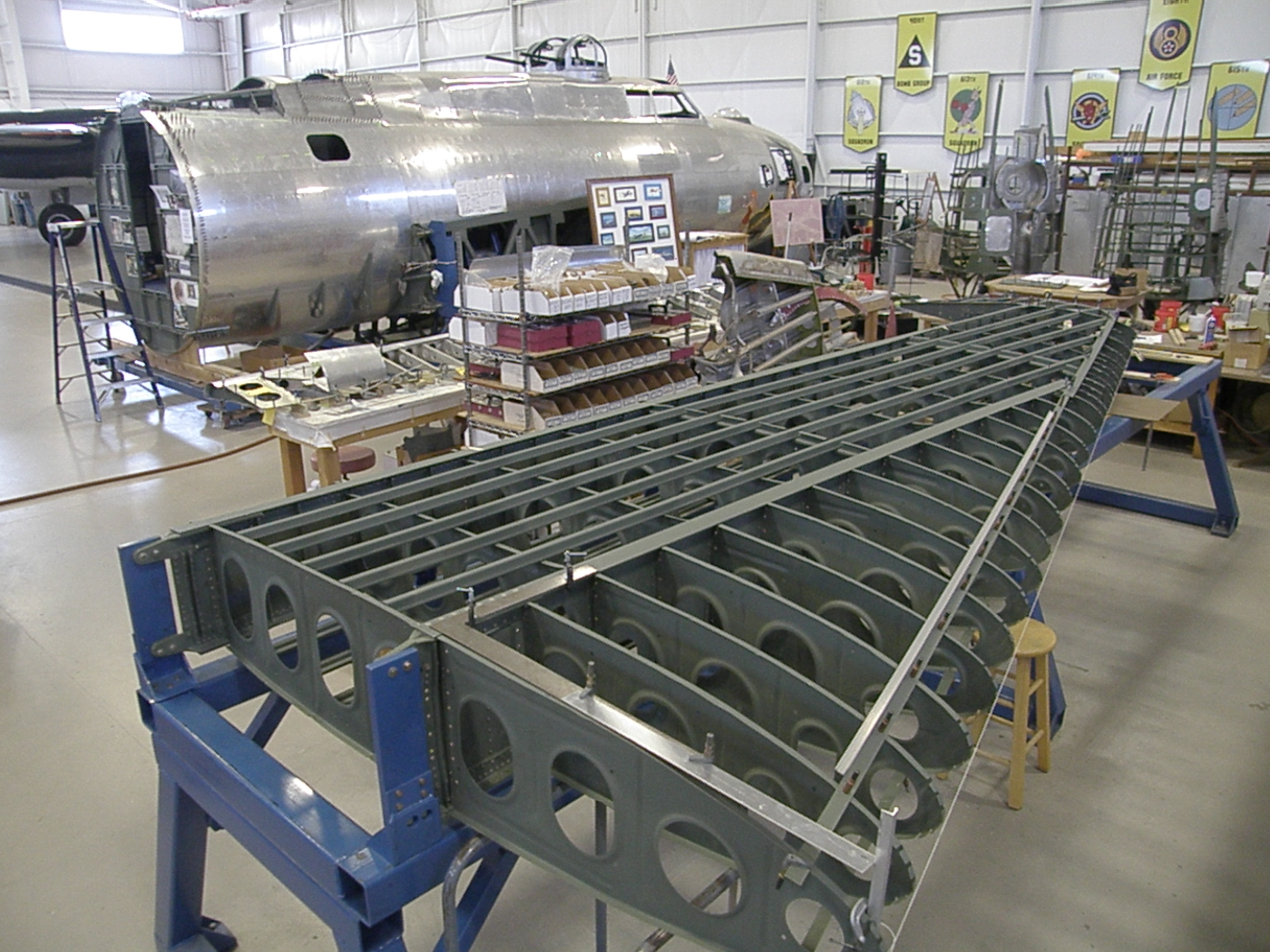 Fans of the B-17 know it was often affectionately called a “big-assed bird”, due to the size of the vertical stabilizer and rudder. Champaign Lady is well on her way to living up to that sobriquet. The restoration team completed the vertical stabilizer in 2007, but had to wait until the rear fuselage was ready last July to mount and pin it in place. The installation took approximately two hours, and went quite smoothly. Fittingly, it required the use of two retaining forks recovered during the Talkeetna expedition, a trip which continues to pay dividends. The team planned to install the vertical stabilizer in time for the August reunion of the 401st Bomb Group, part of which was held in the restoration hangar. It was on the airplane with weeks to spare.

On the day the veterans visited the hangar, their hearts must have been stirred by the tail standing tall in our hangar, proudly bearing the black “Triangle S” of their Bomb Group. It was a humbling moment for all the volunteers in attendance, who stood beside those men that made the 401st “The Best Damned Outfit in the USAAF”. During the war, the 401st flew 254 missions. A few years from now, one of their airplanes will embark on the group’s 255th mission.

These are a few of the major sections underway, all built by the Urbana crew, directly from Boeing’s blueprints. Throughout the rest of the build area, the turtle deck, inspection doors, brackets, machine gun mounts, window sections, crew doors are being shaped, formed, inspected and installed. More on these parts and pieces in the next update!

To keep an eye on Champaign Lady’s progress, please visit www.champaignaviationmuseum.org to access the video feed. Or better yet, stop by the museum at Grimes Airfield in Urbana, Ohio, Tuesday through Saturday. A volunteer would be more than happy to show you around. Seeing the activity and smiles first hand will show you why their unofficial motto is: “In our hearts, a Fortress lives; from our hands, a Fortress flies”.

Click HERE for a previous update about the B-17 ‘Champaing Lady” restoration.