Phil Buckley reports on the “living” B-24 Liberator bomber memorial underway in a south west suburb of Melbourne, Victoria.

History of RAAF WWII B-24 Operations:

Most aviation enthusiasts are aware of the role that the Boeing B-17 Flying Fortress and Consolidated B-24 Liberator played in USAAF service during WWII. Many, however, are not aware that seven Royal Australian Air Force squadrons flew the B-24 Liberator in long range strikes against Japanese military targets in South East Asia. During WWII, the RAAF operated a mixed fleet of 287 B-24D/J/L and M models. RAAF B-24s flew missions from bases in Australia’s Northern Territory and Western Australia, and later on from bases on Morotai and the Philippines. These targets included air bases, bridges, military installations, etc. They also flew highly dangerous, low-level, anti-shipping strikes. Selected RAAF crews also performed special operations missions. Carrying a large bomb load over vast ranges, and protected by a powerful array of defensive gun positions, RAAF B-24s routinely flew deep into Japanese controlled air space. As a result, the B-24s often endured severe enemy attacks during these missions, and consequently suffered losses. Thirty three RAAF Liberators failed to return, sadly taking the lives of more than 200 aircrew with them.

Beginning in 1988, Eric Clark, a former RAAF B-24 Liberator wireless radar operator and waist gunner, suggested to his former boss, pilot Bob Butler, the bold idea of creating a national memorial to the B-24. This vision led to a meeting which was arranged by the B-24 Squadrons of Australia at RAAF Wagga Wagga to expand on the initial idea. The meeting saw representatives from the RAAF, Australian War Memorial and other associations join B-24 veterans to help form the basis of the newly named “B-24 Liberator Memorial Fund”, which would seek to acquire a suitable B-24 for public display. The committee met in early 1989 and started to organise how to go about acquiring the necessary airframe for the project. By late 1989 the Fund became incorporated, and a few years later the title changed to “B-24 Liberator Memorial Restoration Fund” to reflect what was being achieved. During the discussions the participants agreed that efforts would focus on finding a B-24M model. The RAAF had chosen the B-24M as it had late-war, weight-saving features such as an improved tail turret. The waist gunner positions were left open, however a perspex window could be slotted in around the gun mount for flights where no enemy action was expected. Also, Consolidated reintroduced the proven, retractable Sperry ventral ball turret with the M-model. Interestingly, the B-24M series became the last B-24 production model built for the Air Force. The search for a displayable B-24 bomber was eventually successful when the fuselage of RAAF B-24M A72-176 became available. 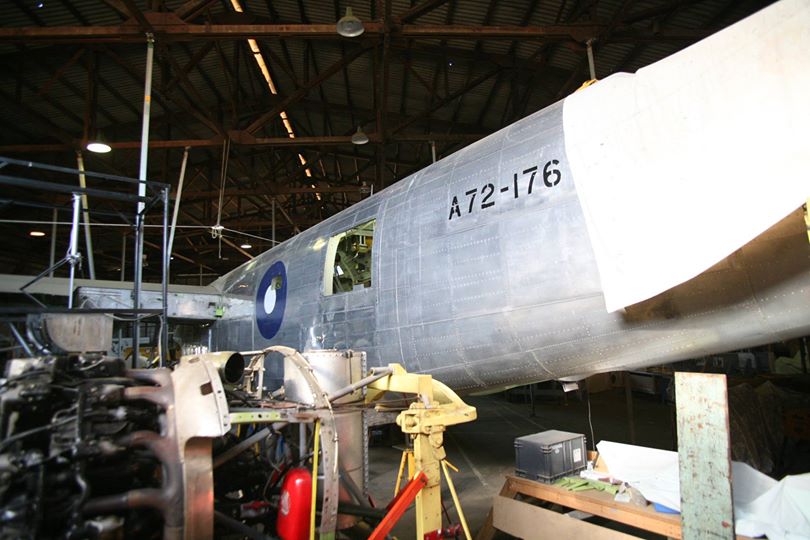 The Fund managed to acquire B-24M Liberator 44-41956, built for the RAAF under lend-lease. Shortly after construction in 1944, it received the RAAF serial “A72-176”, and then flew to Australia. This particular aircraft incorporated modifications which included a search radar in the lower fuselage to help locate and track maritime targets, and as such the B-24M became a B-24R.  The RAAF took A72-176 on charge in late 1944, first issuing her to 7 OTU (Operational Training Unit) based at Tocumwal, in south western part of Australia’s New South Wales region. The training saw bomber crews learn how to fly the Liberator, operate as a team, and cooperate with escort fighters.  Towards the end of the war there were up to fifty B-24s at Tocumwal, along with 5,000 personnel.  A72-176 flew on training missions with various aircrew. One of these men was Group Captain Kingwell, who later became quite involved with its restoration in the 1990s. The RAAF flew A72-176 in various roles, including cargo transport, before striking her off in March, 1946. She was supposed to be fitted out for an Antarctic mission, but, for whatever reason, this never happened. Sitting quietly in retirement, she went up for tender at East Sale Airfield in March 1948, with her fuselage going to George Toye. Sadly, by the time George bought the Liberator, the RAAF had scrapped both the tail and wings.  Still, George accepted the fuselage as it was, and used it as temporary accommodation while he built his new house. After Soye completed the house, the bomber sat on his property between the 1950s and the early 1990s slowly returning to nature. In 1989 the B-24 Fund became aware of the B-24’s fuselage which was located at Moe, Victoria.  The Fund members negotiated to purchase it on condition that they could find wings and a tail. With one part of the project under negotiation, the hunt was then on for the replacement components, which turned up in 1991. The wing came from the crash site of USAAF B-24D Liberator 42-41091, which had force-landed in Papua New Guinea during WWII. The Royal Australian Air Force, Australian Army, Qantas, Shell and many other companies helped in recovering the wing, which saw it imported into Australia in 1992 and eventually moved to Werribee.

The B-24 Fund then went back to George Soye who wanted to alter the original arrangement. While members worked on the wing, others made arrangements  for the fuselage delivery. It wasn’t until 1995 that the fund reached an acceptable acquisition agreement with George Soye concerning the fuselage, which finally  moved to Werribee a short while later. After fifty years of exposure, the fuselage was looking quite battered, and it was clear that a lot of repairs were needed. During 1996 the restoration team got to work on cleaning the fuselage to remove all the accumulated grime. In 2000 the restoration had progressed so far as to mate the fuselage to the wing. The Fund held a dedication service for the now recognizable bomber on August 15th, 2000 before an audience of more than a thousand people, including a number of WWII veterans.

Located south west of Melbourne are a few remaining hangars of what was once the Werribee airfield. The RAAF had Werribee built in 1940 to serve as a training field, storage/repair base and an ad hoc location for various operational units. The B-24 Liberator Memorial Restoration Fund, along with their prized restoration project are located inside one of these hangars. Their Liberator is the only one preserved in the southern hemisphere and one of only a dozen or so complete airframes anywhere in the world, which seems incredible considering that more Liberators flew than any other type of American-made aircraft, with nearly 19,000 rolling off the production lines. After nearly 25 years hard work, the Fund’s ambitious project is getting closer to reaching its goal of preserving a B-24 Liberator to honor the contributions from one of the RAAF’s main WWII-era bombers, and especially the men and women who labored in and around them.

Every time the hangar is open, volunteers are beavering away inside. The museum is a “working” site, so visitors are always able to see, and talk to the passionate volunteers as they go about their business. Visitors can expect to see many volunteers focused on their restoration work. The high level of workmanship on the project is readily apparent upon close examination of the various restored areas such as the cockpit, bomb bay, engines and wing sections. Some volunteers have been involved for decades on the project, including a few actual WWII RAAF B-24 veterans despite now being in their 90s.

The project has so far acquired more than 90% of the airframe, and 70% of its systems and fittings. The airframe is currently undergoing an extensive fit out covering the nose, cockpit, bomb bay, waist gunners and tail gunner sections. The project has five engines that are now operational, but none is yet fitted to the wing. The tailplane is complete, but not yet fitted. The wing is still undergoing a long term clean-up and restoration, and the wing tips while finished, are not fitted due to space limitations. The B-24 can stand on its own undercarriage and wheels, but for the moment is held off the ground by jacks to preserve the tires and struts. Volunteers are currently fitting out the internal crew stations, installing the wiring in the fuselage and wings, along with other systems. Components to rebuild the bomber are sourced from far and wide. Some parts are made on site of course, using the volunteers’ metal-shaping and other skills. The team has even fabricated a few B-24 parts for other projects around the world.

Memorial Goal – A Living B-24 Liberator:

The core aspect of the project is now focused on making the B-24 a “living bomber”.  It will never fly, but the restoration will be to a high enough quality to allow engine runs,  as seen with other “living” warbirds overseas such as the Avro Lancaster “Just Jane” in the UK. The aim is to show the Werribee B-24 to the public with all elements “operational”, and eventually bring her to taxable condition. To enable the B-24 to “live”, four working examples (and one spare backup) of the Pratt and Whitney R-1830 Twin Wasp engines are required. These powerful and compact engines produce 1,200hp output via a twin-row, 14-cylinder, air-cooled radial design. Some of the engines were donated, with one coming from an anonymous person, while two of the engines were purchased from Peter Starr of Dakota National Air. Visitors to the museum can see these engines up close and listen to the sounds via monthly engine running sessions. The hangar is also home to working displays which allow visitors to see how the aircraft systems worked. Visitors can examine up close and watch how the defensive protection of the B-24 worked. The protective fire came from many of its M2 50 calibre machine guns located around the airframe at stations in the nose, upper fuselage, lower fuselage, waist and tail. The volunteers are rebuilding all of the turrets with inert machine guns to fit into the airframe; and some turrets are already working as ground based displays to enable visitors to look closely at how they operated with a crew member in them. The B-24 Liberator Memorial Restoration Fund is a great example of what can be achieved by a team of passionate, dedicated and organised volunteers. The project funding and ongoing work have mainly relied on the goodwill of volunteers, visitors and public donations. 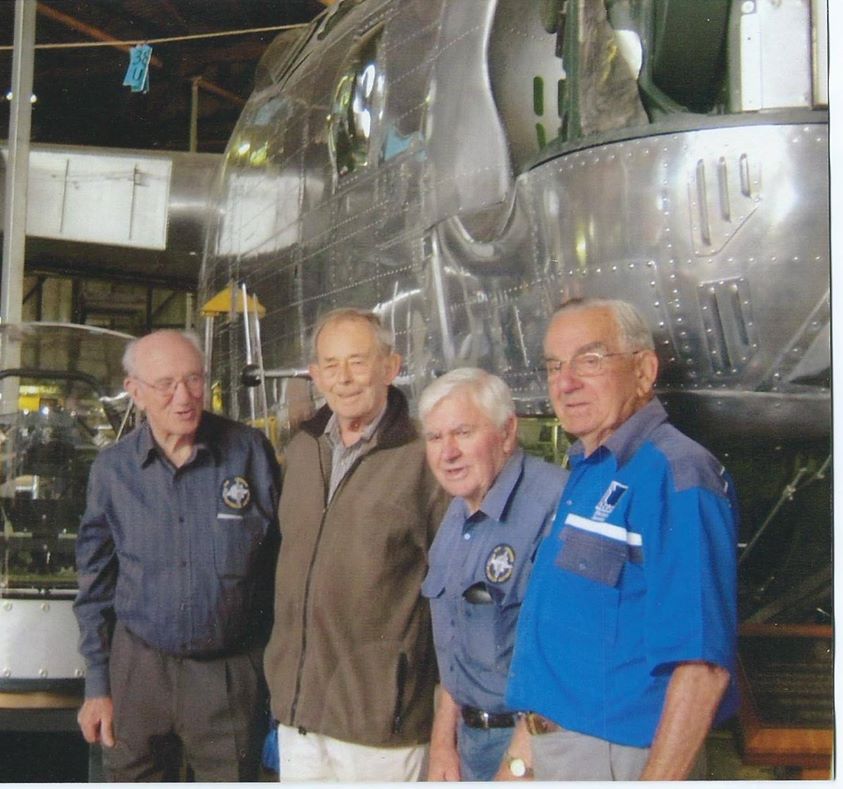 The B-24 Fund has developed a strategic and detailed future plan for the ongoing preservation of its collection. It is hoping to keep and upgrade the current hangar, which will also see on display a replica WWII-era deHavilland Tigermoth, Airspeed Oxford and Avro Anson. A CAC Boomerang fighter project could also join the collection, donated by its current owner, for public display in the future. For more information about the Australian B-24 project please visit HERE. http://b24australia.org.au/home.html. They can also be followed on Facebook HERE.