Your Stories is a collection of memories sent by our readers and readopted as articles for this website. If you are interested in sharing your memories and stories with us please contact us HERE.

When the call went out for someone to pilot the BT-13 for a photo shoot for a magazine, I jumped at the chance to fly with not one, but two of America’s national treasures.  Yet, after having the good fortune of being selected to fly with Col McGee, the gravity of the event began to weigh on me.  During the launch of Mercury 3, Alan Shepherd uttered a mantra to himself that was popularized by the movie The Right Stuff.  Probably every pilot since has uttered his own version of Shepard’s Prayer, and as I lay awake in bed before dawn the morning of the flight, I was no different. Oh Lord, please don’t let me “foul” up.

The beauty of the Vultee is striking.  The colors are bold and the lines lead your eye on a journey of exploration, from the red and white striped empennage, across the broad yellow wings to the beautiful curve of the radial engine housed under a cowling of blue.  Behind that engine, aft of the markings of Tuskegee Field is a single name written under the front cockpit: Col McGee.  I’ve spent the last eighteen months honing my skills in this airplane, learning what the Vibrator still has to teach pilots today, and now I was being called to fly the man whose name is emblazoned on it.  Gulp. 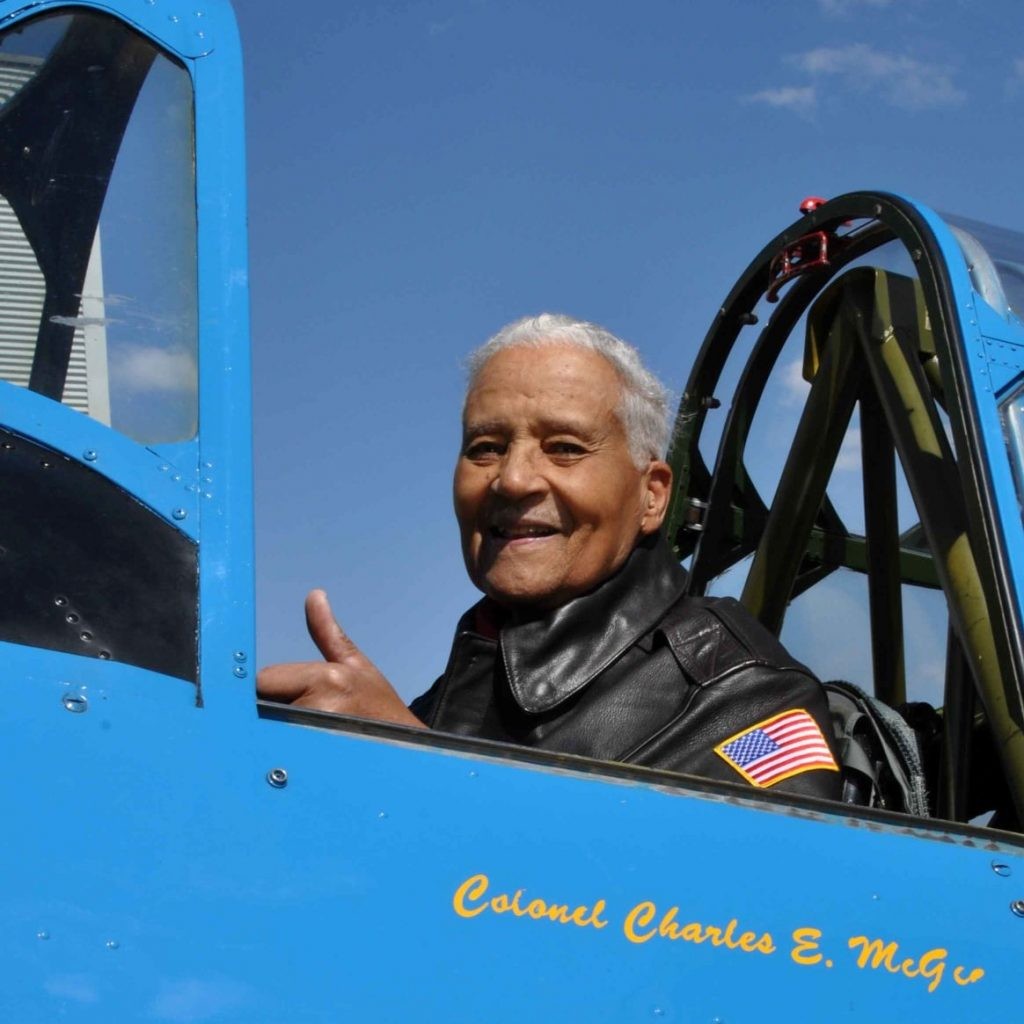 I was milling about smartly by the airplane when Col McGee walked through the open hangar door and out to the flight line.  He was dressed in a flight suit, leather jacket, and carried his Nomex gloves.  I immediately realized he was prepared for business.  We shook hands and posed for a few pictures by the airplane, then turned our attention to the flight at hand.  Although the step from the ground to the wing root seems to have grown a little taller in the past 70 years, once he mounted the wing he gracefully slipped into the cockpit.  I hope I’m as nimble as he is when I’m 93 yrs old.  I helped him locate the many straps and cords in the cockpit, but he was no stranger to parachutes and knew all the tricks of the trade to don one.  After 409 combat missions and a log book amassing 6,308 flying hours on active duty, in everything from a Stearman to a Phantom, he didn’t need much help getting settled.

After strapping myself into the front office, we had a few moments to wait while the photo ship struggled to start its engine.  During the pause, we chatted briefly and I took a picture of him seated in the airplane ready for flight.  As I did, it dawned on me that this man of history, who had sacrificed so much and fought three wars abroad and one at home, was now in my charge.  I was solely responsible for his health and safety.  Double gulp.  I softly repeated my own Shepard’s Prayer as I waited to call our engine to life.

Within a few moments, both airplanes were swinging their props and we taxied out for takeoff.  Having spent most of my adult life in an airplane, I’ve become rather good at compartmentalizing (much to the dismay of my wife!) and as I pushed the throttle forward, I left my on Shepard’s Prayer tarmac and turned my full attention to the task at hand.

Once airborne and level, I passed the controls to Col McGee and I had the pleasure of sharing a perfect moment of flight with him.  I glanced at him in the vibrating rearview mirror on the canopy frame, and I could see his smile broaden as he gently banked the airplane, first left then right.  As I looked at the T-6 photo ship a short distance away, I felt like Col Mac was dancing with it across the Virginia sky and I had a front-row seat in a two-seat theater.

We took turns flying through turns, climbs, and descents to get just the right sun angle and perspective for the photographer.  When he flew, I put my hands up on the canopy rails and enjoyed the performance.  When I flew, I could feel the light touch of his hand shadow me on the stick.  As a CFI myself, I’ve done this same maneuver with my own students.  I smiled, knowing that I was under the tutelage of a master. 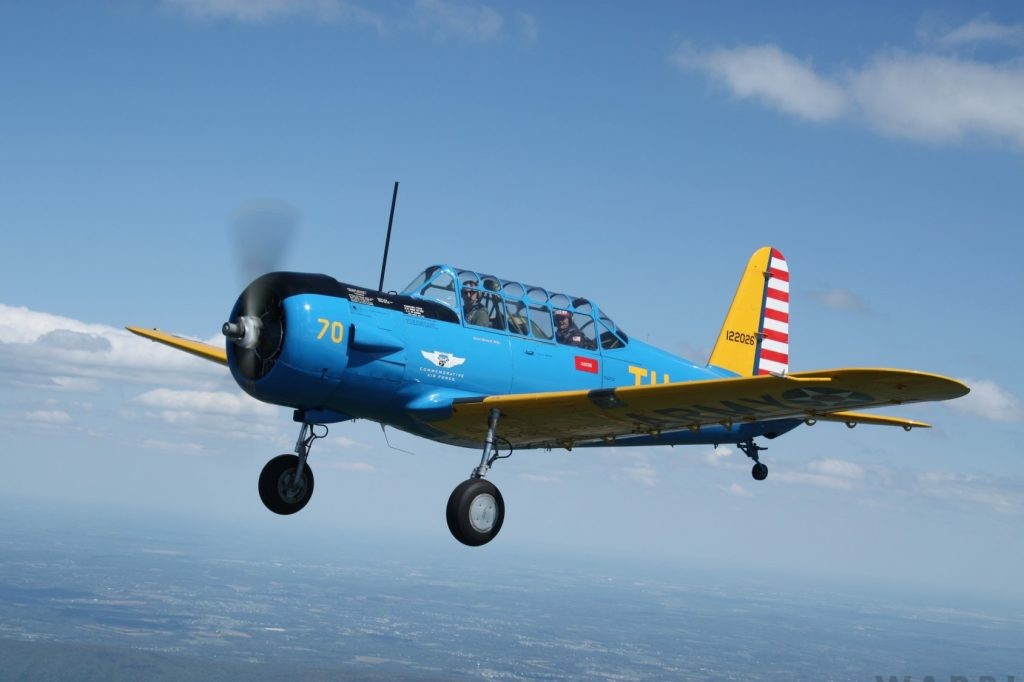 All too soon, the photo mission was complete and both airplanes turned east, back across the hills to find the airport.  Col Mac expertly winged us home, guiding us into the traffic pattern.  As we had briefed, I would perform the landing.  How do you ask someone who you’ve read about in history books to let you make the landing?  I know you’ve done this several thousand times, but can I do it today?  Ever the gentleman, as I called out “I have the controls” he relinquished them to me.  As we turned from base to final and the runway filled the windscreen, my Shepard’s Prayer was there waiting for me.  The challenging conditions of a gusty quartering crosswind were nothing compared to the self-induced pressure exuded from carrying this precious cargo.  Calling on my compartmentalization skills again, I quickly shunted my Shepard’s Prayer and concentrated on the landing.  I made a nice wheel landing, albeit a little off-center.  Oh well, the centerline is for professional use only.  As I brought the tail wheel down and slowed to taxi speed, I let out a huge sigh of relief.  I looked in the mirror and told the Colonel, “I’m glad I didn’t embarrass myself on landing!”  We both chuckled.

As we taxied in and shut down, Col Mac’s daughter, Yvonne, came up to the wing and asked, “How was the flight?”  Other than the fact that I had a true American hero grading my every move, it was great!

After the flight, Col Mac posed for a few pictures with the plane that bears the most frequent buzz number from Tuskegee Field.  Sitting in the front seat, he said, “It’s comfortable here.  I might not want to get out.”  You may as well take it home, sir.  After all, it has your name on it.

I noticed as he stepped down and walked around to shake everyone’s hand, that he had a little more spring in his step than he did an hour before.  His smile was infectious and he was bursting with energy.  Yvonne told me he gets like that every time he goes flying, “His body comes back to earth, but his head stays in the clouds.”

Col Mac was gracious enough to entertain our many questions.  He told us briefly about his experience in WWII and the numerous airplanes he flew overseas.  When asked how they transitioned from P-39s to P-47s to P-51s in a few short months, he said they would read the book and then sit in the cockpit to figure out where all the switches and gauges were.  “I figured that if the crew chief could start the engine, I could fly the plane,” he quipped.

Col Mac offered to give me something for the flight, and I told him the only thing I would accept was his signature in my logbook.  After he signed it, in the last moment that I had the Colonel to myself, I thanked him for his service, and more so, for the struggle he and his comrades were willing to go through just to have the opportunity to contribute.  As a veteran myself, I’ve had many people thank me for my service and it’s humbling gratitude to accept, but Col McGee did so with such grace as he diminished his own contribution and passed the appreciation on to the fallen. 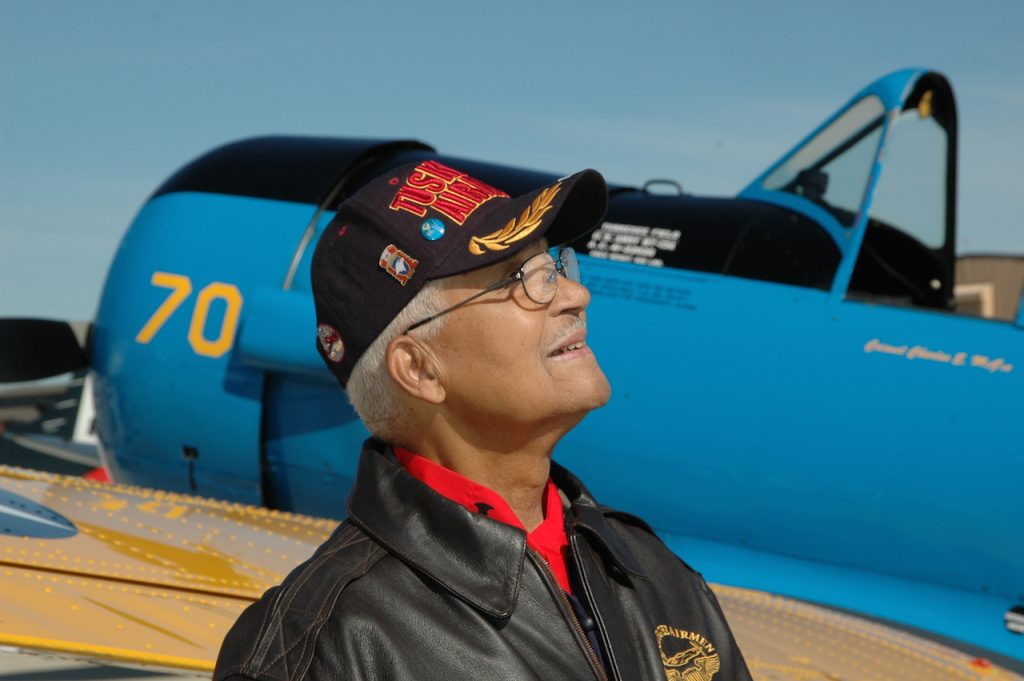 Before long, Yvonne and Col Mac were headed to the car and drove away.  As they left I reflected back on the events of the day.  No matter what else I may achieve or not achieve in my life, this day is certainly one of the pinnacles of my aviation career.  Today was the day I took two famed WWII veterans flying and brought them both safely back to earth.  In some small manner, that makes me a part of history too.

The Capital Wing and Delaware Aviation Museum Foundation are both non-profit 501(c)(3) organizations and staffed entirely with volunteers. For more information, and to support the unit visit www.capitalwingwarbirdrides.org/about-us

Your Stories is a collection of memories sent by our readers and readopted as articles for this website. If you are interested in sharing your memories and stories with us please contact us HERE.