October 14, 2006 was a beautiful fall morning. At Arlington National Cemetery final preparations were being made for the dedication of the United States Air Force memorial. Scheduled to attend were President George W. Bush, Defense Secretary of Defense Donald Rumsfeld, scores of Air Force dignitaries, Air Force Medal of Honor recipients, and their families.

When I reported to the 113th Weapons Shop at 0600hrs on Saturday October 14, 2006, it was just another typical Drill weekend. I was aware that this day marked the 59th Anniversary of Chuck Yeager’s historic X-1 flight, other than that it was just another Saturday. At this early hour, I had no knowledge that a dedication ceremony would be taking place just a few miles from our flightline at Arlington National Cemetery.

It was not until the sun rose and shed its light on the vast Andrews flightlines that I realized that this was no typical Saturday. I noticed the unusual assortment of aircraft parked together on the other side of the base. From our ramp I could see an F-15, F-4, F-22, B-17, B-24, DC-3, T-6, T-6A, F-86, C-17, Stearman, and the Thunderbirds. Why would such a collection of USAAF/USAF aircraft be assembled at Andrews AFB in the middle of fall? Throughout the day, as my fellow weapons loaders and I prepared our F-16s for the afternoon “Go”, I kept an eye on these aircraft. If they started to move towards the runway, I wanted to have my camera ready. 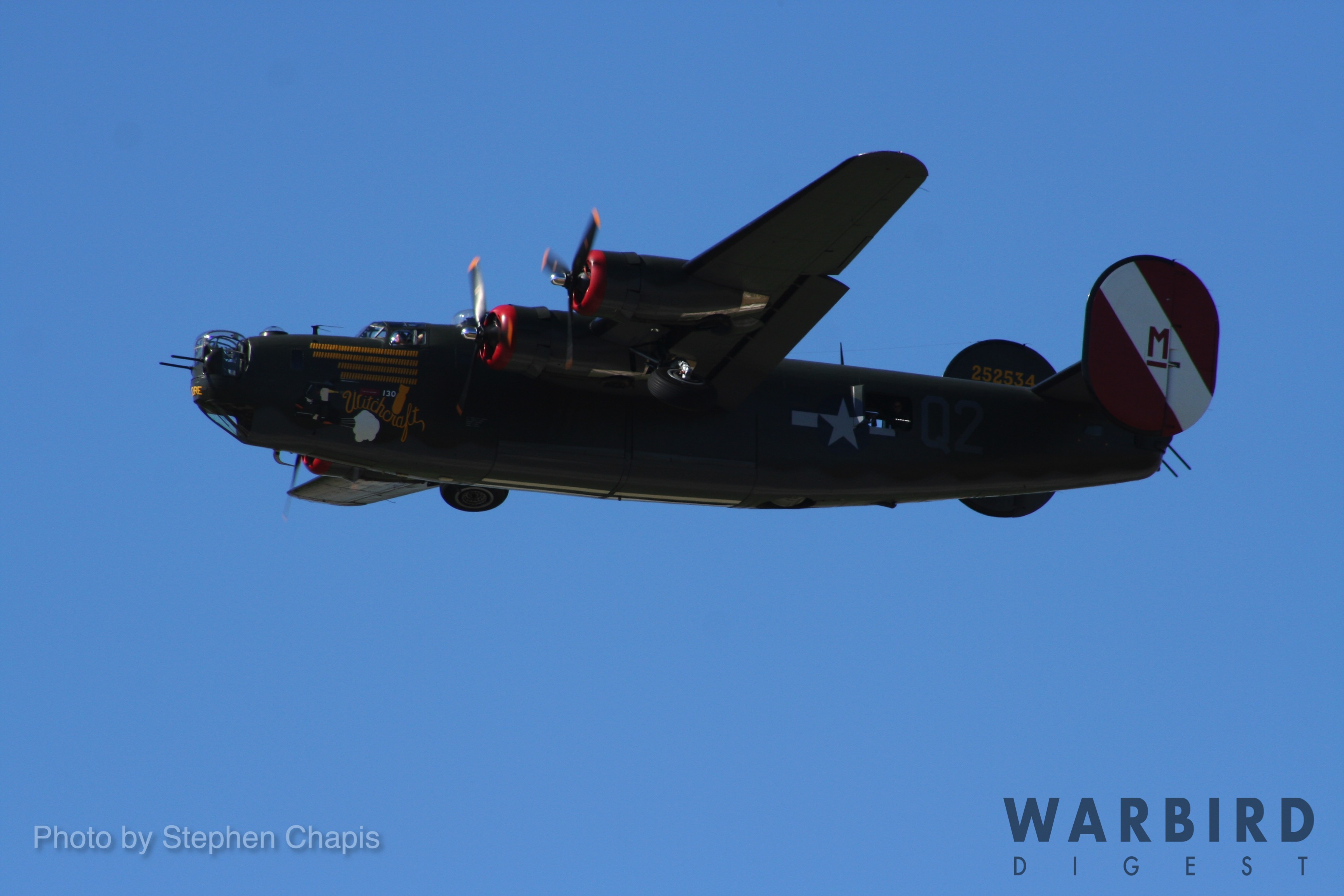 At 1300hrs, my load crew and I headed to the north end of the field to the End-of Runway (EOR) area to await a flight of two F-16s. EOR is where maintenance & weapons crews perform final checks on the aircraft and its weapons before launch. At 1320hrs the two jets arrive, we look them over and give them the thumbs-up. They taxi to the end of Runway 19R and hold. In order for us to return our ramp via the taxiway we need permission from Andrews Ground. The ground frequency is alive with chatter and it takes us approximately 5-7 minutes to get clearance to return to our ramp. Once we received clearance and head back to our shop, I notice that the all of the WWII aircraft are also taxiing to 19R. There is nothing for us to do while the aircraft are airborne, so I drop my crew off at the shop and head down to the Aero Club ramp to photograph the departure of these aircraft. 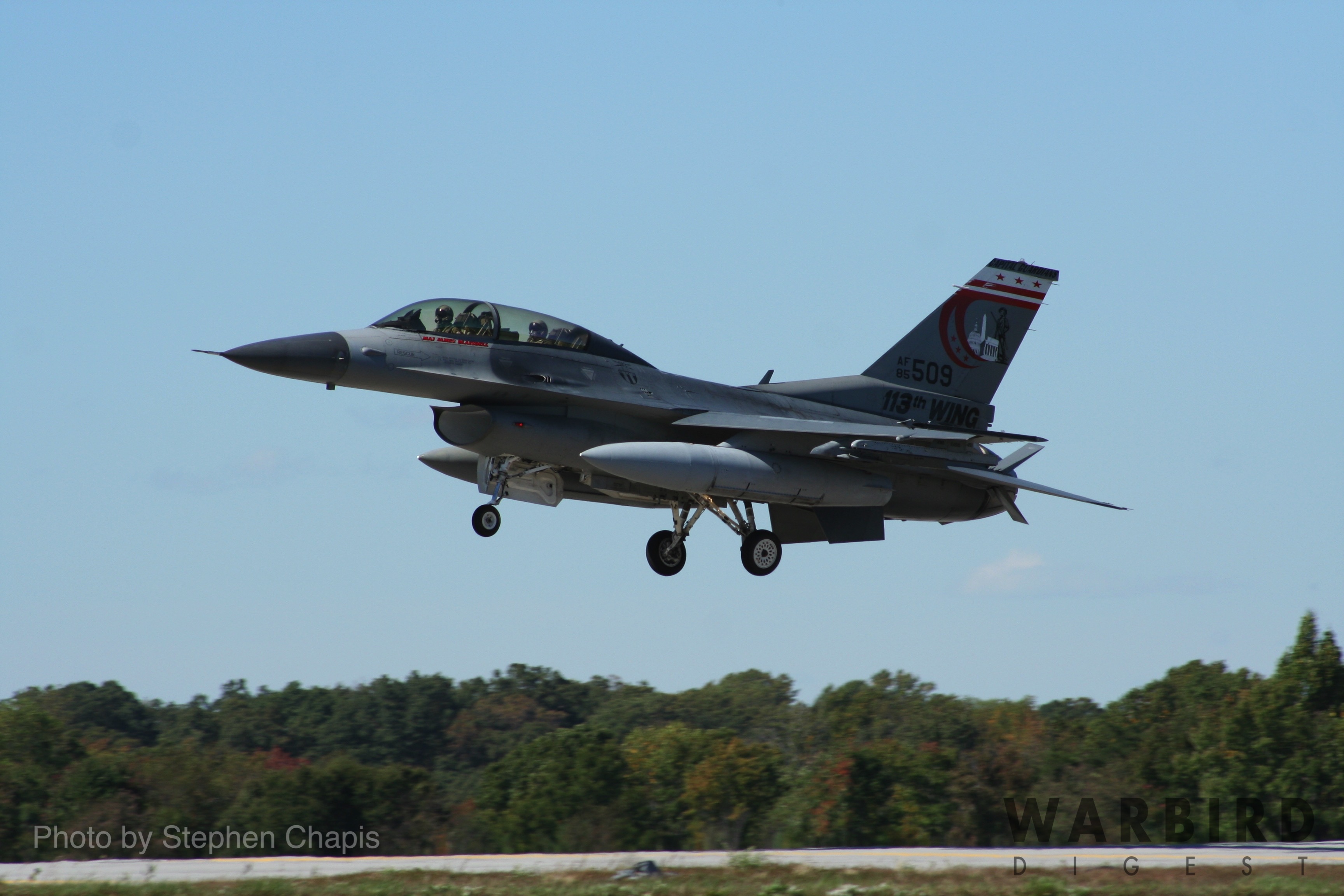 The first aircraft to depart were our two F-16s at 1332hrs. They were off to do ACM with an unknown foe. The aircraft involved in the memorial fly-over was the PT-17 Stearman at 1335hrs. The runways at Andrews are a little over 9,000ft long and I was only 1,000 or so feet from the other end. By the time the Stearman passed me he had already climbed to at least 1,000ft. It would be 5 minutes before another aircraft took off. In that time two CAP pilots came out of the Aero Club hangar to watch the take-offs. They commented to me that I would be getting some good pictures today. I agreed and asked them why these aircraft were on the base. They told me about the dedication of the Air Force Memorial at Arlington and that these aircraft would be involved in a fly over that would showcase the history of Air Force aircraft. The flyover would be led by the Stearman and capped off by the Thunderbirds. I could not believe my luck. 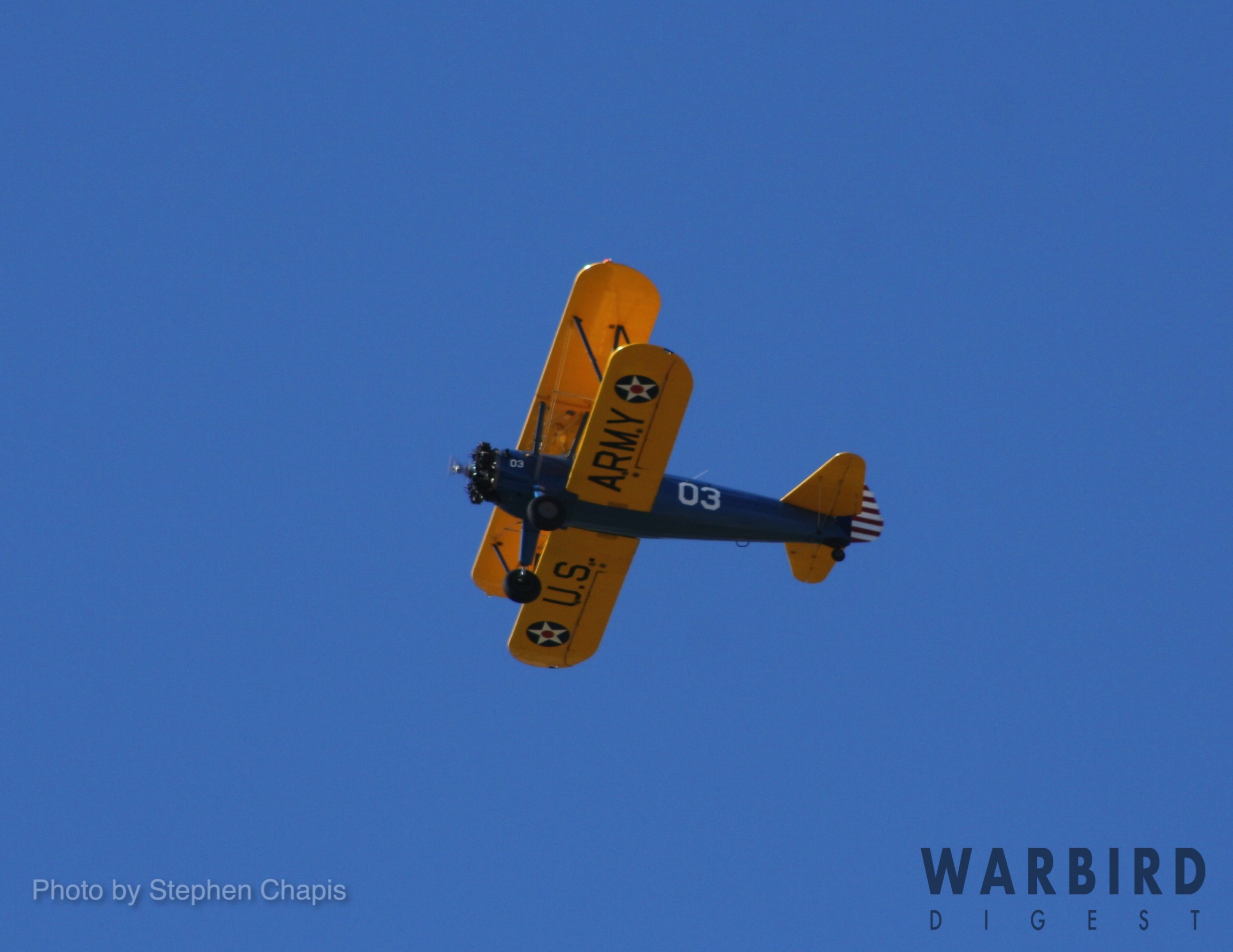 After a brief lull, the take-offs began again in earnest. In the next eight minutes the T-6, T-6A, B-24, B-17, and DC-3 all took off. There was no other aircraft movement at the time my ears were treated to the glorious sounds of radials, save the T-6A and DC-3 which were turbines. I had seen all these aircraft at airshows in the past, but today they seemed different. At airshows there are crowds, whiny kids, speakers, bleachers, tents, and jumbotrons to block photography, and way-too-loud PA systems. All of these factors take away from the aural and visual experience of seeing these beautiful aircraft in flight. Not today. Today, it was quiet. It was calm. It was sunny. It was chilly. It was perfect. This state of perfection was broken when I heard my callsign come over the radio. Duty calls. My crew was needed on the flightline. The task we performed took only ten minutes, but in that 10 minutes the F-86, F-4, F-15, and F-22 departed. This was quite a disappointment, because the F-86 and F-4 departures were rather spirited. The pilots of both aircraft flew the length of the runway at 75-100 feet and made crisp, steep banks out of the pattern. What a picture that would have made. 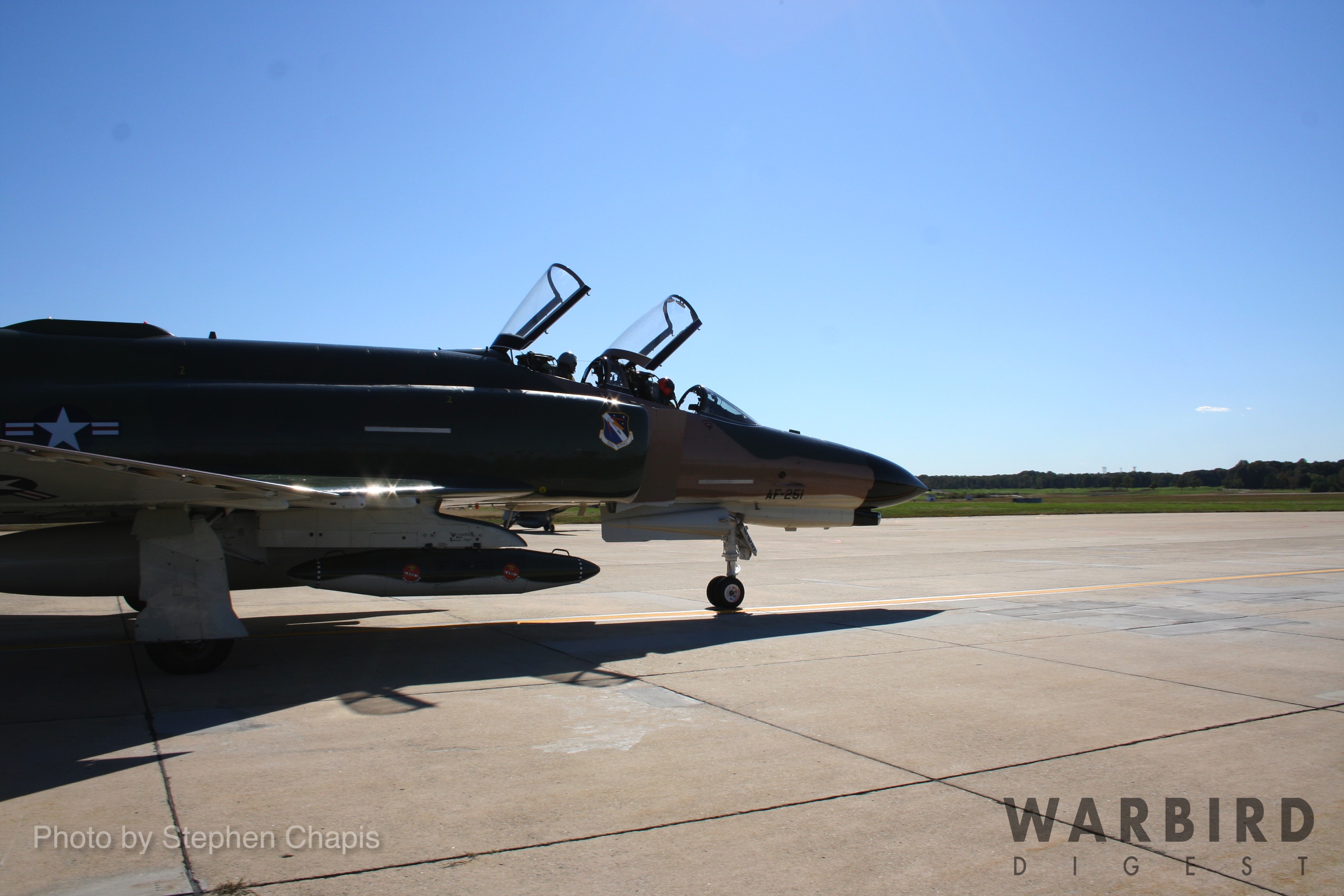 By this time the flyovers had begun at Arlington. The aircraft were approaching from two different directions- Northeast to Southwest and Southeast to Northwest. Each approach passed within a mile or so of Andrews’ base perimeter. The F-86, F-4, F-15, and F-22 formed up and made their pass as the Heritage Flight.

It now close to 1430hrs and our jets were due back in the next 10 minutes. Once again, my crew and I jump in the truck and head down to the departure end of 19R to recover our jets. As we leave the shop, I see the shadowy silhouette of a B-2 Spirit pass south of the base. Once again, the ground frequency is very busy because the flyover aircraft are beginning to return. I call Andrews Ground three or four times for permission to drive onto the taxiway. With a slightly curt tone the controller clears me to the southern EOR area. This lady was busy; she was working with half-dozen arriving warbirds, a C-17, our returning F-16s, and the departing Thunderbirds. We follow the T-6 and T-6A down the taxiway to the EOR area. Our jets are parked on the ramp between the two parallel runways and we need clearance to cross the active runway to get to them. That clearance was not forthcoming at this time; there were still lots of activity on the runway. I take the opportunity to shoot a couple pictures of the T-6. 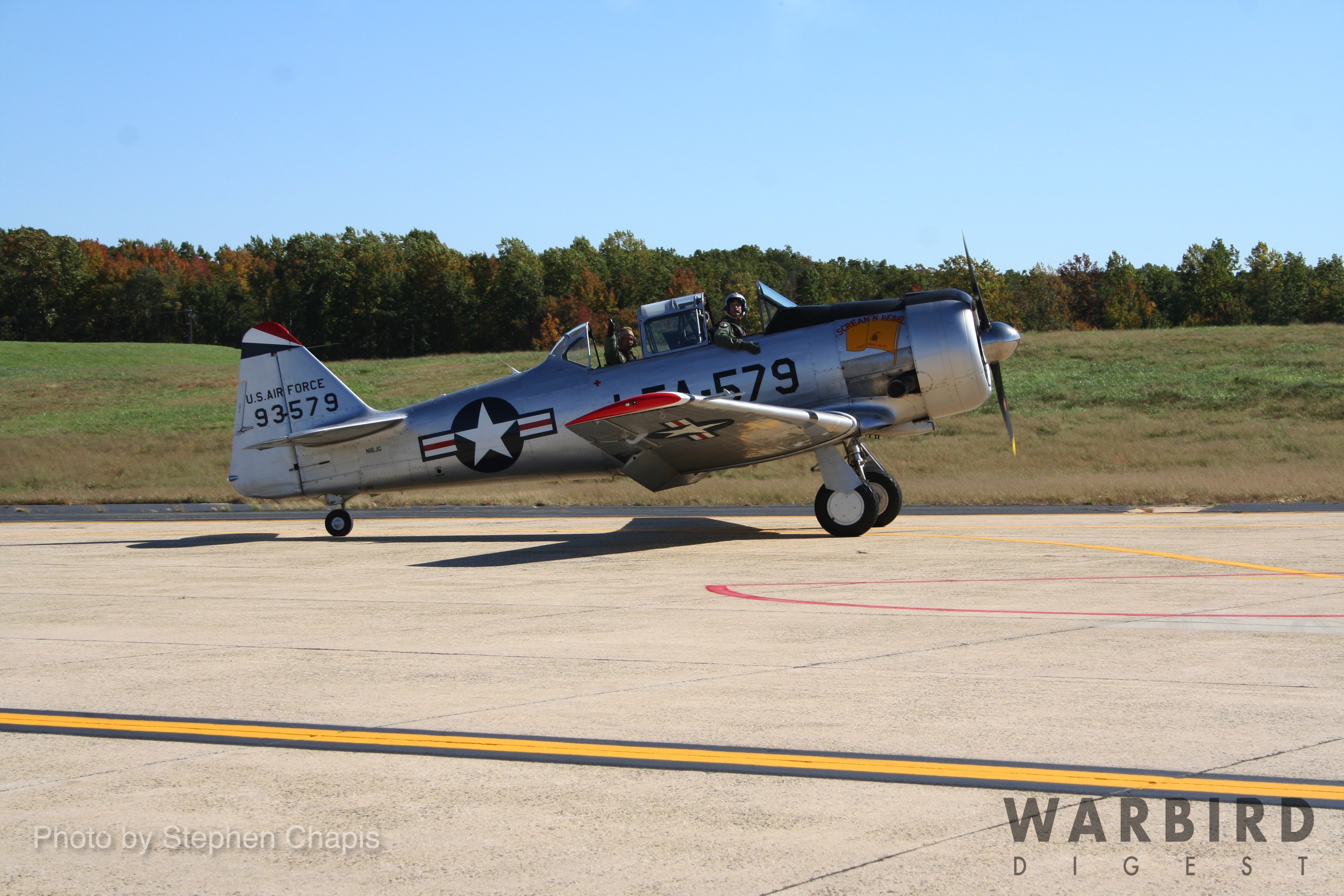 From my current position I thought I would get some interesting pictures of the Thunderbirds take-off since every Thunderbird departure is a show departure whether it’s an airshow or not. Well, that was not the case today. They took off in singles, but this made their take-offs much more exciting. All six jets took off in full afterburner and passed directly over our truck at very low altitude. In one picture of the T-6, the pilot is looking up at #1 as it passed over us. Just as we get back in the truck the ground controller tells us to expedite our crossing of the active. Safely across the runway and parked in front of our jets, we get out and make them safe to return to the ramp. The ground controller tells us to stay put until all flyover aircraft are on the ground. We would end up waiting 10 minutes. There was nothing to do but wait, but what a place to wait. Most of the returning aircraft were going to taxi within 15 feet of our truck!

The first aircraft to come by was the C-17; this required our jets to re-position to another ramp to make room for the massive Globemaster III. The C-17 pilot had to maneuver to the left side of the taxiway to clear our truck; even so the wingtip nearly was over our heads as he passed. Once safely passed our truck he steered back onto the centerline which buffeted our truck (and me standing outside) a little because the outboard engines hang over the taxiway edges. Five minutes later the F-4 lands and taxies by still trailing his drogue chute. The pilot waves as I snap his picture. Pilots love to have their picture taken. The F-4 is quickly followed by its successor, the F-15 Eagle. This Eagle is the East Coast Demo jet. It is starting to calm down now and the T-6 and T-6A cross the runway. The last aircraft to pass our truck was the Turbo DC-3. Unfortunately for me the Stearman, F-86, B-17, and B-24 turned off at mid-field and the F-22 and the Thunderbirds did not return to Andrews. Once the Gooney Bird passes us, Andrews Ground clears us across the runway, and we return to our shop and head home for the day.

What a day it had been. In the span of one afternoon, I had the rare opportunity to observe and photograph aircraft that spanned 60 years of United States Air Force history.