The Lockheed PV-2 Harpoon was probably one of the least known bombers to have participated in the Second World War, and with just three examples flying in the U.S., it is among the rarest types as well.  The example here pays homage to a little-known squadron that participated in the most overlooked campaign of the war-the Aleutians.

Prior to launching on the photo flight where these accompanying photos were taken, Warbird Digest, Dave Hansen provided a brief explanation of how this aircraft was returned to its rightful place in the sky, “It was a chance encounter when I spotted this aircraft on the apron at Buffalo Airport (Johnson County Airport- KBYG) in Wyoming.  I managed to come to an agreement with the owner in July 2006 and decided to move it by air to my facility at Utah for restoration, we had to work for more than a year to get it into condition to perform the ferry flight safely.  Despite having not flown in two decades, we moved the PV-2 to Heber City (Heber Valley Airport, Utah, KHCR) on October 7, 2007.”

Once at KHCR, it took Hansen and a team of friends and volunteers, two years to return the former sprayer to how it would have appeared during the Aleutian campaign.  Its first post-restoration flight took place on May 23, 2009.  Hansen said of the paint scheme, “The decision to paint it in the classic tricolor scheme and markings of Patrol Bombing Squadron One Thirty-Nine (VPB-139) as a flying tribute to those men who flew this twin in a particularly difficult and hostile environment, where their contribution has never been fully appreciated.  Credit for the ATTU WARRIOR nose art goes to local artist Dave Mueller. 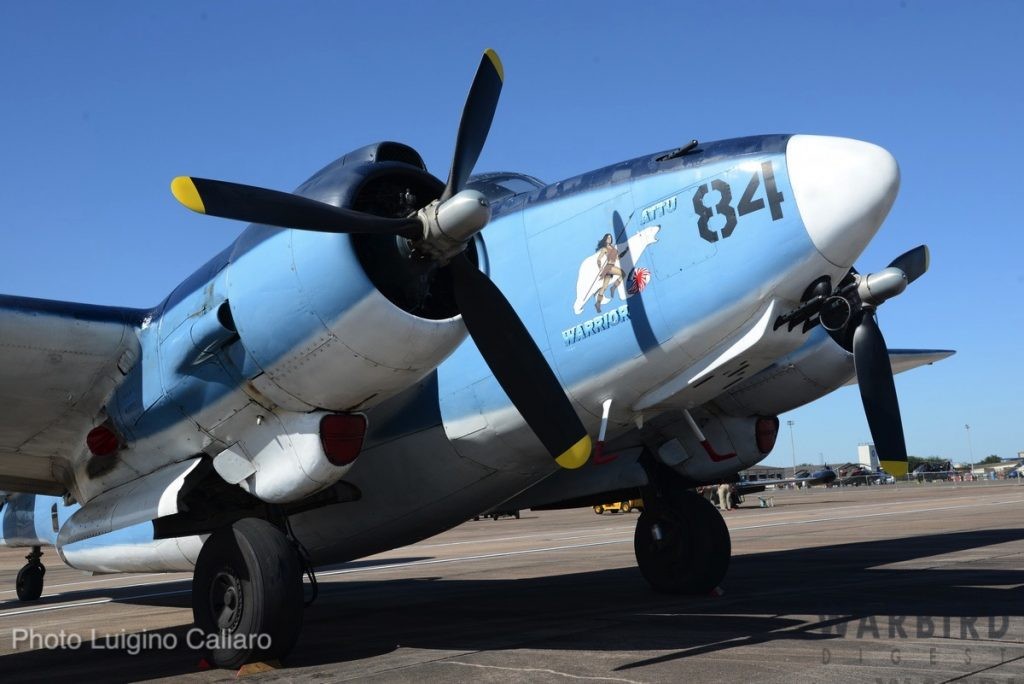 Like any warbird, this PV-2 has two stories to tell.  The aircraft rolled off Lockheed’s Burbank facility production line on April 4, 1945, and was assigned BuNo 37472 and was never assigned to an operational unit before the war ended and thus placed in storage at NAS Litchfield, Arizona.  Over the next decade, it spent a majority of its service in storage at Litchfield Park, Arizona with brief assignments at Alameda, Willow Grove, and Anacostia.  When it returned to Litchfield again in August 1956, it would remain there until it was stricken on December 17, 1956.  It may have been ten years old, but it was still a brand new aircraft as it had logged just 387 flight hours.

After initially being placed on the U.S. Register as N5223V, it became N7670C when it was acquired by George Stell in 1963.  Stell converted the aircraft into a crop sprayer, a role it fulfilled with numerous owners until its retirement in 1987.  Its final owner, Hirth Air Tankers of Buffalo, Wyoming, intended to convert the aircraft into an air tanker, but when the owner of the company passed away, the conversion never took place and Seven Zero Charlie sat on the ramp until it was saved by Hansen two decades later.

Between the seventh and tenth of October 1943, 15 PV-1 Venturas of VB-139, which had been established seven months prior, departed NAS Whidbey Island, Washington for NAF Amchitka in Alaska’s Aleutian chain.  Their first combat patrols began on October 8, as soon as the first aircraft arrived.  Three weeks later, a detachment was established at NAS Attu on 1 November and became the squadron’s principal operating location the following month.  From Attu, the squadron flew patrols out to 350 to 550 miles because it was assumed that only B-24s and PBYs could reach Japan’s northern Kurile Islands.  On May 19, 1944, Lieutenants R.A. MacGregor, D.M. Birdsall, and T.H. McKelvey performed a night reconnaissance mission over the distant island chain, and for the next four months, 139’s Venturas flew hundreds of reconnaissance and bombing missions over the Kuriles.  On their first tour, the squadron suffered one KIA, co-pilot Lt(jg) Clifford Thomas, and five MIA when Lt W.S. Whitman’s PV-2 failed to return from a patrol.

The squadron returned to Whidbey Island in May 1944 and became a training squadron.  In early February 1945, the squadron began receiving the first of fifteen PV-2 Harpoons, and after a brief period of training and familiarization flights the re-designated VBP-139 again deployed to the Aleutians on March 1 with combat patrols commencing on March 12.  On that second deployment, VBP-139 Harpoons were armed with rockets, and flight crews began flying attack missions.  But by the end of April 1945, the PV-2s began showing signs of fatigue due to aggressive maneuvering, including high-G pull-outs after rocket passes, thus they returned to the more benign patrol and reconnaissance missions, which continued until the end of the war.  As it did on its first tour, the squadron listed one crew as MIA after they failed to return from a patrol.  The last Harpoon landed at Whidbey Island on August 23 and the squadron was decommissioned on September 13, 1945.

Today ATTU WARRIOR remains at Heber City, Utah, which is also home to Hansen’s Warbird Warriors Foundation.  Warbird Digest also spoke with one of the six pilots that are checked out in the PV-2.  Steve Guenard’s father was a Naval Aviator that instructed in SB2C Helldivers, while he is a former Air Force pilot, with thousands of hours in F-106s and F-4s and went on to fly with Delta Airlines.  Guenard said, “Thanks to Dave, I realized my dream of flying a warbird.  This aircraft is a real pleasure to fly and is always popular at airshows.  It is an honest aircraft and even though the controls are very heavy and require some muscle, it has excellent handling and incredible power and almost flies like a fighter, but we are very gentle with it in flight.”

Though the Japanese simultaneously attacked Dutch Harbor and invaded the islands of Attu and Kiska on June 6-7, 1942, the Aleutian Islands campaign was overshadowed by larger developments in the Pacific War.  Thus, the contributions of the men, aircraft, and squadrons that participated in “The Forgotten Battle” have been largely forgotten, but thankfully Dave Hansen, Warbird Warriors Foundation, and ATTU WARRIOR are doing their part to honor the service and sacrifice of America’s Aleutian veterans.

Sadly, since this article appeared in print, Dave Hansen passed away following a battle with cancer in January 2018, and the Attu Warrior has not flown since. Hopefully, a new owner will be found to carry on the legacy of this truly unsung hero of the Pacific Campaign during World war Two. 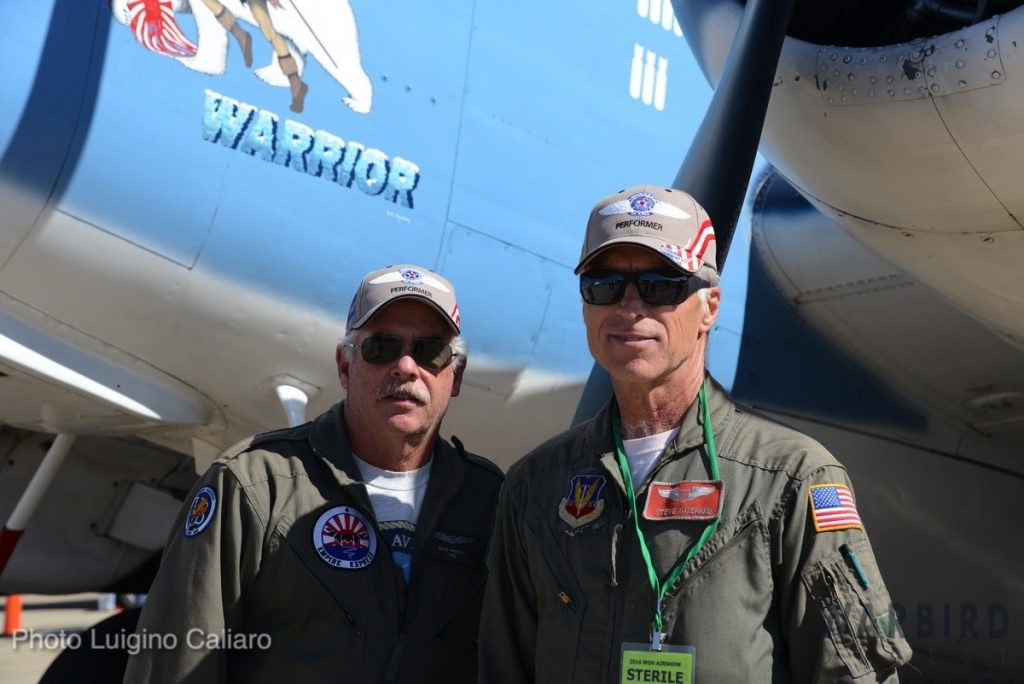 Special thanks go to Luigino Caliaro for helping draft this article and the photos. F0r more information about Luigino’s work please visit www.aerophoto.it