If it had not been for the Vietnam War, not to mention feature films Air America (1990) and Con Air (1997), the history of the Fairchild C-123 Provider may have very well passed ignominiously into aviation history. Derived from a heavy assault glider conceived by the Chase Aircraft Company, the XCG-20, the C-123 was developed into two different prototypes. The XC-123 was powered by a pair of 2,200-hp Pratt & Whitney R-2800-23 radials while the XC-123A was fitted with four General Electric (GE) J47-GE-11 turbojets, which powered contemporary aircraft like the B-47, F-86, and B-45. The former aircraft first took on October 14, 1949, and proved to be the best aircraft. It is interesting to note, however, that, even though it was an experimental aircraft, the jet-powered XC-123A was the Air Force’s first jet transport aircraft. The U.S. Air Force placed its initial order in 1953 and soon there were 300 examples in service.

The capability and versatility of the Provider attracted the attention of the U.S. Coast Guard, which pressed the Provider, designated HC-123B, into service in 1958, as a transport and long-range maritime search platform. Despite being used by the Thunderbirds during the late 1950s, its heroic resupply flights during the three-month siege of Khe Sanh, and numerous special operations roles, including as a gunship, the C-123 will forever be remembered as the dubious poster boy of Operation Ranch Hand defoliating program.

While Ranch Hand is well-known, what has been lost to history is that on May 12, 1968, Lieutenant Colonel Joe M. Jackson, who’d flown P-40s and B-24s during World War II and 107 combat sorties in F-84s during Korea, found himself circling over a special forces camp airstrip at Kham Duc, South Vietnam. After the fall of Camp Lang Vei during the Tet offensive in February, Kham Duc was the only observation post left in I Corps, the northernmost military district in South Vietnam. When the camp came under heavy mortar attack on May 10, General William Westmoreland ordered it evacuated.

On May 12, the enemy had overrun the forward outpost and set up machine-gun positions on the airstrip itself. These positions had already disabled two CH-47s and a C-130 that landed to evacuate personnel. Another C-130 burst into flames killing the crew and 150 Vietnamese civilians. When another C-130 took off with the last remaining personnel it appeared that Jackson’s crew wouldn’t be needed until they heard a frantic radio call that a three-man combat control team had been left behind. Jackson immediately put his Provider in a 4,000 foot per minute dive from 9,000 feet and landed on the last 2,200ft of usable runway. As he spun around the combat team sprinted from a nearby culvert into the open cargo ramp. Meanwhile, a 122mm rocket landed 10 meters from Jackson’s aircraft but didn’t explode. Jackson taxied around the mortar and took off having been on the ground for less than 60 seconds. For his actions, President Johnson pinned the Medal of Honor around Lt Col Jackson’s neck on January 16, 1969.

Despite its yeoman service and proven versatility, the Provider began to indisputably show signs of its obsolescence, in terms of both payload and performance, when compared to the turbine-powered C-130 and was subsequently assigned for transport duties to the units of the ANG and AFRES shortly after the end of the Southeast Asian conflict. One of the last units to fly the C-123 was the Air Force Reserve’s 302nd Tactical Airlift Wing at Rickenbacker AFB, Ohio, which parented an ASB (Air Sprayer Branch) equipped with four UC-123K until their retirement, which occurred in June 1986, utilizing them for a series of specialized activities including the dispersal of insecticides for the control and debilitation of the disease transmitted by the insects, with operations conducted in Alaska, South America, and the Indian Ocean.

The Air Heritage Museum located at Beaver Falls County Airport (BVI), in Beaver Falls, Pennsylvania, originated in 1983 but only in 1990, as a result of rapidly multiplying opportunities of membership, Air Heritage, Inc. was founded. The dedication of the volunteers had already proven their capabilities with the restoration of the B-17G Nine O Nine after it ran off the runway during the 1987 Beaver Airshow. Therefore, Air Heritage Inc. reached an agreement to restore and maintain the important warbirds collection of David Tallichet and since then a number of static restorations, including an F-4C, F-15A, and Jet Provost, have been completed, while a Piper L-21B, in original Italian Army colors, combat veteran C-47B Luck of the Irish, have been restored to airworthy status along with the Provider.

The Air Heritage Provider left Fairchild’s Hagerstown, Maryland facility on May 6, 1954, as C-123B, USAF #54-0664 and assigned to the 513th Troop Carrier (Assault Group – Tactical Air Command) at Stewart AFB, Tennessee. During its service, ‘664 returned to Hagerstown on two occasions for upgrades, the first was in July 1967 when it was converted to C-123K standard, which included the addition to a pair of GE J85 turbojets, and again in 1969 when it was modified to a UC-123K defoliant aircraft. When it was finally retired to the desert boneyard at Davis-Monthan AFB, Arizona, #54-0664 had served in no less than six Air Force major commands and 10 operating locations from Otis AFB, Massachusetts to Holloman AFB, New Mexico.

After the aircraft had been declared surplus, Air Heritage managed, in April 1994, to obtain the aircraft, with the intention of returning it to flying condition. The agreement between Military Aircraft Restoration Corporation (MARC) and Air Heritage stated that if Air Heritage could recover the C-123K from storage at Davis-Monthan AFB, Arizona, and fly it to BVI, MARC would lease it to Air Heritage for one dollar a year and receive a third of its airshow proceeds. Upon inspection the aircraft found it to be in a better state than they had imagined, and within the space of a couple of weeks were able to prepare the aircraft for its ferry flight.

On May 7, 1994, the day after Bob Hudock conducted the initial test flight, the ferry flight to Beaver Falls commenced, but while landing at Midland, Texas, a tire burst, forcing a prolonged stopover. Additionally, a massive loss of hydraulic fluid was discovered, which required further remedial work and repair by the Air Heritage team. The repairs took a week and on May 13, the C-123 departed again for Pennsylvania, and finally touched down at BVI at 1600hrs the same day.

Once ensconced in the museum’s hangar the volunteers of the Air Heritage Museum subjected the aircraft to a complete restoration program, applied a Southeast Asia paint scheme, and nicknamed the Fairchild THUNDERPIG, in honor of what the type had been called by the Provider crews of 911th AW at nearby Greater Pittsburgh Airport. The aircraft has impressed thousands at airshows since it returned to the skies over two decades ago and co-starred with Tom Cruise in the 2017 feature film American Made.

There are less than ten C-123s listed on the U.S. Register, and for the time being the Provider known as THUNDERPIG, is the only flying C-123 in the United States. Its home base is at Beaver Falls is just 130 miles from Fairchild’s “Thunder Factory” where it was born in 1954 and served the U.S. Air Force with quiet distinction for 27 years. Interestingly, 2021 marks THUNDERPIG’s 27th anniversary as a warbird, and thanks to the volunteers at the Air Heritage Museum, it will continue to serve as a flying memorial to the crews who flew the C-123 around the world.

Special thanks go to Luigino Caliaro for helping draft this article and the photos. F0r more information about Luigino’s work please visit www.aerophoto.it

To support THUNDERPIG and to learn more about the Air Heritage Museum, visit www.airheritage.org

The paper version of this article is available inside issue 66 of Warbird Digest. Click HERE to purchase it. 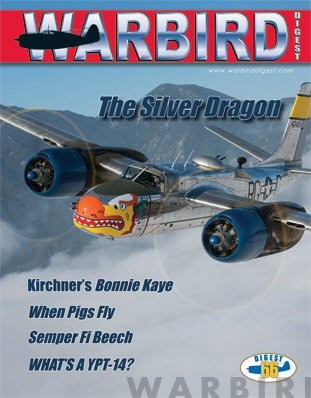