A pioneer of the aviation art industry, this new book is an informal memoir of Virginia Bader’s trail-blazing career, and brings to life behind-the-scenes moments with General Jimmy Doolittle, General Adolf Galland, and many World War II aces, pilots, and the famous artists who depicted them in paintings.

Sadly passing away in July 2022, Virginia Bader (a distant cousin of the famous British fighter ace) pioneered the aviation art movement in America. The young Englishwoman helped the artists portray the aerial battles of world wars on canvas. Her booth at annual national air shows and her galleries on the East and West coasts of the United States were continually crowded with collectors and enthusiasts. Bader presented symposiums at the Smithsonian Air and Space Museum and other venues, bringing together American, German, and Russian aces to re-live their dogfights many years later. The “Virginia Bader. A Collage of Memories of the First Lady of Aviation  Art” contains more than 50 photos and is available on amazon.com and at bookstores, $19.95.

Author Jill Amadio, born and educated in England, is an international award-winning journalist. She writes a monthly column for Entrepreneur magazine, and she worked for the Sunday Dispatch/Daily Mail in London, for the Spanish-American Courier in Madrid, and was lifestyles editor of the Bangkok Post while residing in Europe, South America, and South-East Asia. The other books she has written include Help! I’ve Hired a Lawyer; The Gloria Balaban Story; Günther Rall: Luftwaffe Ace and NATO General; My Vagabond Lover: An Intimate Portrait of Rudy Vallée, among others. 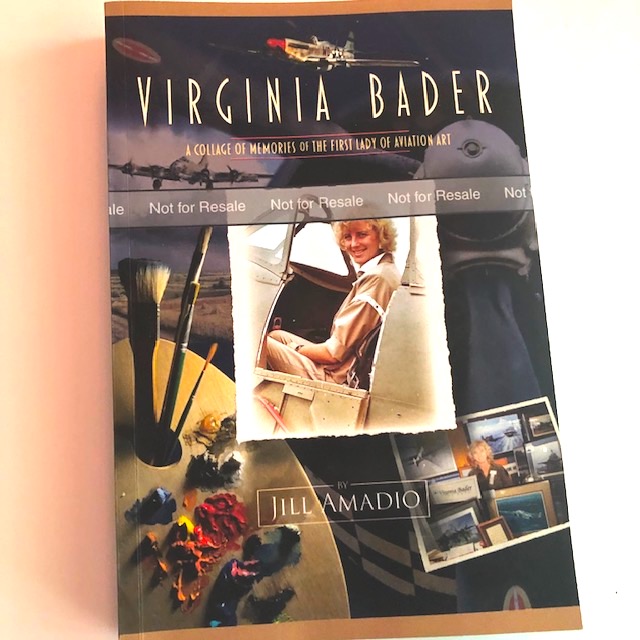