On October 7, 1963,  the first of two Learjet 23 prototypes, made its first flight at Wichita, Kansas, with test pilots Henry Grady (“Hank”) Beaird, Jr., and Robert S. Hagan. A light twin-engine business jet, the Learjet 23 is considered a “first” because it was designed from the start as a civil aircraft.

A characteristic of all Learjets is the 13° sweep of their wings’ leading edges, and the straight trailing edge.

Lear Jet Corporation built approximately 100 Learjet 23s. The first prototype was damaged beyond economical repair while simulating an engine failure on takeoff during flight testing, on June 4, 1964. The accident was attributed to a pilot error. N801L had accumulated just 194 flight hours.

An innovator in aircraft technology, Learjet Inc. is one of many legacies of the 20th-century inventor and industrialist William Powell Lear. Best known for his bold effort to build the world’s the first private jet, Lear had a distinguished history of other inventions that are seldom acknowledged; it was the fortune from these earlier ventures that provided Lear with the capital to establish the Learjet company. Currently, part of Bombardier Inc., a Canadian conglomerate that also owns several other aviation manufacturers, the company has been forced to change its independent ways and adapt to a new horizontally-integrated structure. Nevertheless, Learjet continues to be a market leader in several categories of small and mid-size corporate jets. 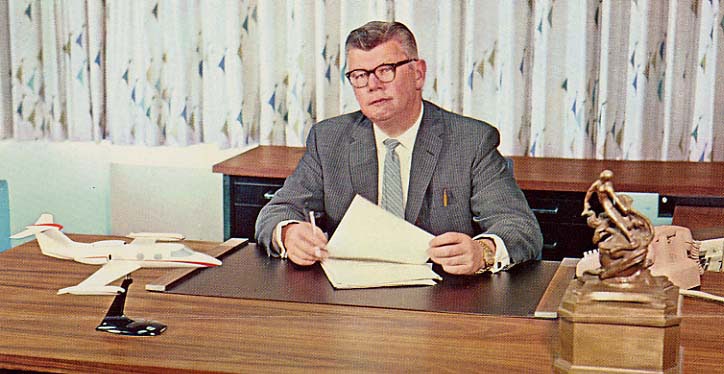