The Macchi-Castoldi M.C.72 was designed by Ing. Mario Castoldi for Aeronautica Macchi-S.p.A. It was a single-place, single-engine, low-wing monoplane floatplane constructed of wood and metal. It was 8.32 meters (27 feet, 3½ inches) long with a wingspan of 9.48 meters (31 feet, 1¼ inches) and a height of 3.30 meters (10 feet, 10 inches). Surface radiators were placed on top of each wing and surface oil coolers on the floats. 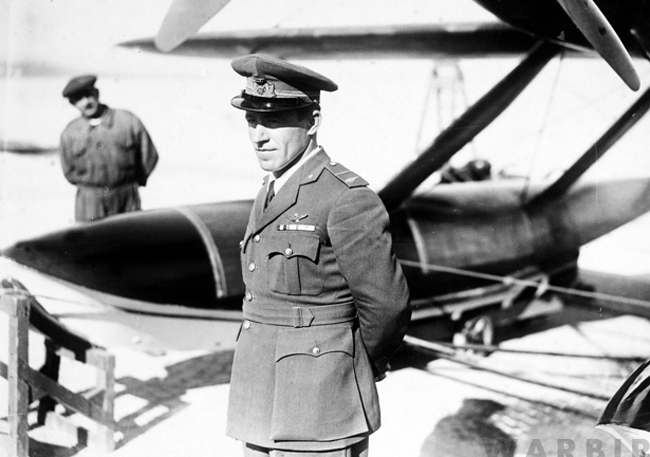 Five Macchi M.C.72 floatplanes had been built for the 1931 Schneider Trophy race, but problems with the Fiat AS.6 engine, which was essentially two AS.5 V-12s assembled back-to-back, prevented them from competing. Four test pilots, including Francesco Agello, had been selected to fly the airplanes for speed record attempts. Two of them, Captain Giovanni Monti and Lieutenant Stanislao Bellini, were killed while testing the M.C.72, and the third died in the crash of another type. The cause of the accidents were explosions within the engines’ intake tract. Though they ran perfectly on test stands, in flight, they began to backfire, then explode.

It was discovered by Francis Rodwell (“Rod”) Banks,³ a British engineer who had been called in to develop a special high-octane fuel, that the Fiat engineers had overlooked the ram effect of the 400 miles per hour (644kilometers per hour) slipstream. This caused the fuel mixture to become too lean, resulting in pre-detonation and backfiring. A modification was made to the intake and the problem was resolved.

Francesco Agello was twice awarded the Henry De La Vaulx Medal by the Fédération Aéronautique Internationale, and also awarded the Medaglia d’oro al valore aeronautico. In part, his citation read, “A high-speed pilot of exceptional courage and, after competition in difficult and dangerous test flights during the development of the fastest seaplane in the world, twice he conquered the absolute world speed record.”

Capitano Agello was killed in a mid-air collision, on 26 November 1942, while testing a Macchi C.202 Folgore fighter.