The Wright R3350 ‘Cyclone 18’ radial engine is a massive, complex engine which powered significant aircraft like the Boeing B-29 Superfortress to help end World War II. The R3350 is a ‘round’ engine with two rows of nine cylinders surrounding a common geared drive-shaft spinning a four-bladed, controllable-pitch propeller. A supercharger and other improvements gave the Cyclone engine incredible power making it one of the most commonly used radial engines within the United States military and civilian aviation too.

Tinker’s role with the Wright R3350 was massive and intense for many years. Since Oklahoma City had an overhaul line and experience with the 3350s predecessor, the Curtis-Wright R1820, the support and supply systems were in place to overhaul the more complex engine without too many problems. The experienced workforce overhauled 38,678 R3350 engines in the Oklahoma City Air Material Area between Dec. 1943 and Dec. 1952, according to Tinker History Office documents reviewed for this article. This high number was driven by the B-29 Superfortress having four R3350 engines. The Cyclone 18 engine also powered other aircraft such as the Consolidated B-32 Dominator, Fairchild C-119F/G Boxcar, Lockheed C-121 Constellation, Douglas A-1 Skyraider and the Lockheed P-2V Neptune.

The R3350 was an improvement in design from Curtis-Wright’s R1820 which added a second row of nine cylinders. The second row was added behind the first in a compact design which filled the spaces between the cylinder heads for additional horsepower. While this design was compact and efficient, because the engine was air-cooled it also left no place for the heat to dissipate and became one of the engines long-term limiting factors in both operations and maintenance. During development there were hundreds of thousands of small design changes made. 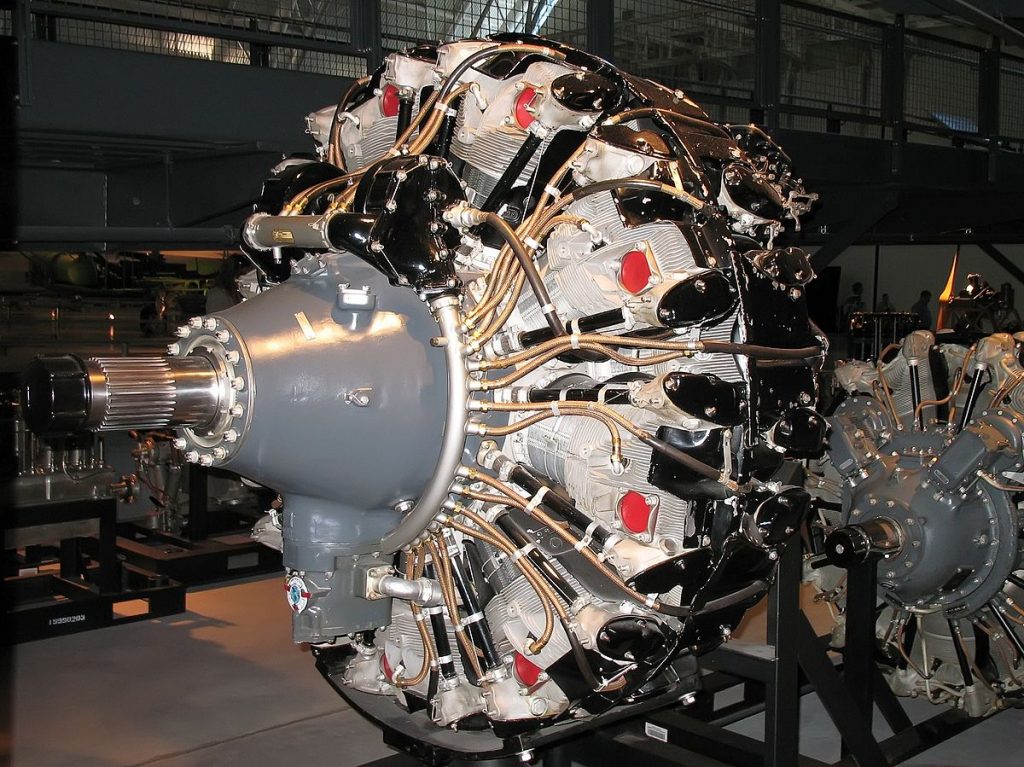 Another innovative design element of post-war R3350s came through the development of a turbo-compound systems which captured exhaust energy and returned it to the engine as usable horsepower. This complex system used three power recovery turbines to boost take-off horsepower by 550 and cruise efficiency by over 200 horsepower at altitude. This innovation went in to production in the late 1940s with the first PRT equipped R3350s all going to meet military requirements between 1950-1952. In January 1952 commercial airlines began to receive the engine to power aircraft such as the long-range Lockheed Constellation.

The R3350 Cyclone 18 powered the B-29s which dropped atomic weapons on Japan to end World War II. Now instead of powering aircraft which create devastating results through atomic fire, they power aerial tankers from Neptune Aviation in Missoula, Montana, for example, to fight fire and prevent devastation.