The YF-102 was a single-seat, single-engine, delta-wing fighter designed as an all-weather, missile-armed, Mach 2 interceptor. It was developed from the earlier, experimental, Convair XF-92 Dart. The F-102 was planned for a Westinghouse XJ67-W-1 engine, but when that was not ready in time, a Pratt & Whitney J57-P-11 afterburning turbojet engine was substituted. The J57 was a two-spool, axial-flow engine with a 16-stage compressor section (9 low- and 7-high-pressure stages) and a 3-stage turbine section (1 high- and 2 low-pressure stages). The J57-P-11 was rated at 10,000 pounds of thrust (44.482 kilonewtons), and 16,000 pounds (71.172 kilonewtons) with an afterburner.

The prototype finished assembly at the Convair plant in San Diego, California, on 2 October 1953. It was then shipped by truck to Edwards Air Force Base in the high desert of southern California where final preparations and testing were carried out.

The National Advisory Committee for Aeronautics (NACA) tested scale models of the YF-102 in the 8-foot HST wind tunnel at the Langley Memorial Aeronautical laboratory and found that significant shock waves were produced at near-sonic speeds. Surprisingly, shock waves were created at the trailing edge of the delta wing. The shock waves caused very high drag that would keep the aircraft from reaching Mach 1, even with the more powerful engine planned for production models.

The Republic YF-105 fighter bomber had similar problems, though it did pass the speed of sound. Both aircraft were significantly redesigned to incorporate the “Area Rule,” developed by NACA aerodynamicist Richard T. Whitcomb. Rather than considering the aerodynamics of the fuselage independently, the frontal area of the wings and tail surfaces had to be included to reduce drag. This produced the “wasp waist” or “Coke bottle” shape that the production models of these two fighters were known for. Convair built two YF-102s before the design was changed, resulting in the YF-102A prototypes and the production F-102A Delta Dagger.

Several problems showed up on the YF-102’s first flight. Severe buffeting was encountered at high sub-sonic speed. As predicted by NACA, aerodynamic drag prevented the YF-102 from reaching Mach 1 in level flight. There were also problems with the landing gear, and the fuel system and the J57 engine did not produce the rated power.

The production F-102A was considerably larger than the YF-102. The fuselage was lengthened, the wing area and span were increased, and the vertical fin was taller. A more powerful J57-P-23 engine was used. These and other changes increased the F-102A’s gross weight by nearly 1,800 pounds (815 kilograms). 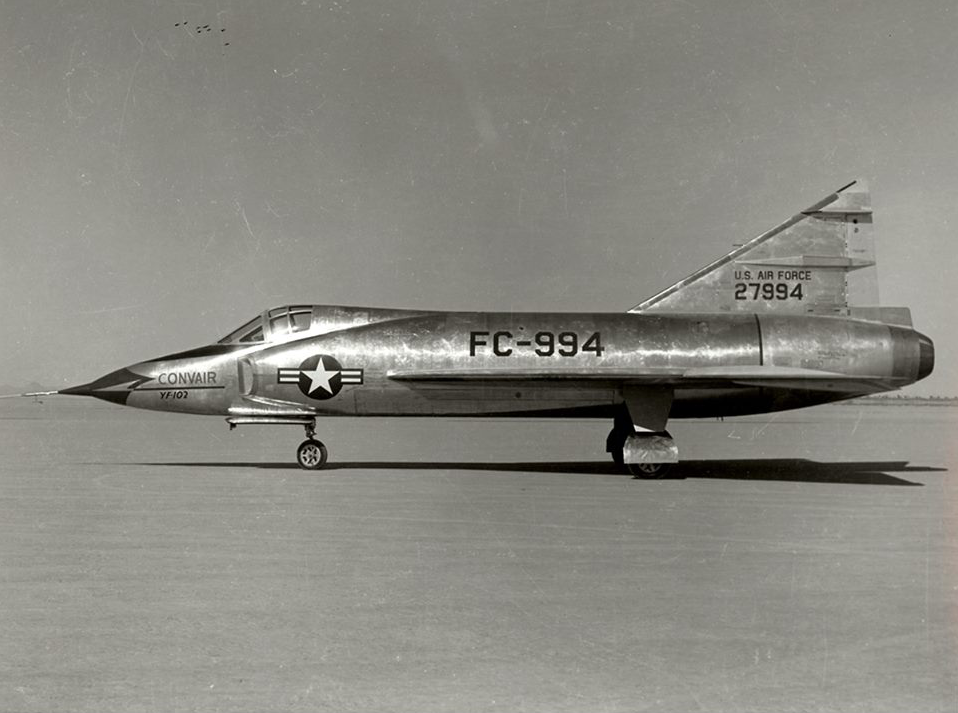 On 2 November 1953, just nine days after the first flight, the Pratt & Whitney J57-P-11 engine flamed out during a test flight. Dick Johnson was unable to restart it and made a forced landing in the desert. The YF-102 was severely damaged and Dick Johnson was badly hurt. The flameout was traced to a problem with the fuel control system. The prototype was written off.

The primary mission of the F-102 was to intercept and destroy enemy aircraft. It was the world’s first supersonic all-weather jet interceptor and the USAF’s first operational delta-wing aircraft. This supersonic jet was one of the mainstays of the Air Defense Command in the 1960s. By 1974, surviving F-102s — called “Deuces” — had all been assigned to the ANG and to the air forces of Greece and Turkey.