Pilots the world over know the wonderful ode to flight written in the 1940s called High Flight. For seven decades this masterpiece has stood the test of time and could certainly be considered one of the classic poems of modern aviation. Now comes an entirely new ode, but equally emotional one, this ode written in 2020 by a F-35A Evaluator Pilot frustrated by the increasing reliance on simulators in flight training. “Tell me how to match the feeling of flight without flying,” the ode begins. “To match the feeling of the walk out to your jet in the scorching heat, the searing sounds, and the sweat-soaked earplugs in your ears… To match the strap-in…the feel of your body weighted down by gear and already exhausted, your wingman’s jet-blast in your face, stress and pure joy mixing around in your blood…” And so it begins, some 18 stanzas as deeply moving as High Flight yet in an entirely different way but one resonating with pilots across the nation. “It brought back feelings I haven’t felt in years,” wrote one reviewer on the ode’s website. Said another, “This guy gets it.”

The “guy” is USAF Lt. Col. Nick “Ditch” Suppa, an Air Force Academy graduate and a combat veteran with more than 100 missions over Afghanistan. Suppa wrote his ode as a rant against simulators but he hardly stopped there. “It was a way for me to describe what flying in some of the world’s most high performing aircraft is like,” said Suppa. “The experiences you must endure to master the craft and own the sky.” Others saw something bigger including best selling author Doulas Keeney. “I’m no military aviator but I’m a pilot and it resonated with me,” said Keeney. “That’s how we met and where the collaboration began. We decided to turn his ode. We started with the F-35A, Nick’s plane, but we were soon swamped with requests from pilots of almost every plane you can mention.” Indeed, that included special versions made to honor WWII and Vietnam era pilots including a P-51 given to Bud Anderson embellished with his Mustang “Old Crow.”

The ode, now universally called “Tell Me How”, is 18 stanzas that touch all phases of flight in simple but powerful prose that combines the sights, sounds, and, most importantly, the feelings experienced by the pilot of a high performance aircraft. “Like High Flight, I think it will stand the test of time,” said Keeney. “Judging from the letters we’re getting, a lot of other aviators feel that way, too.”

Tell Me How is available online at www.tellmehowposter.com. 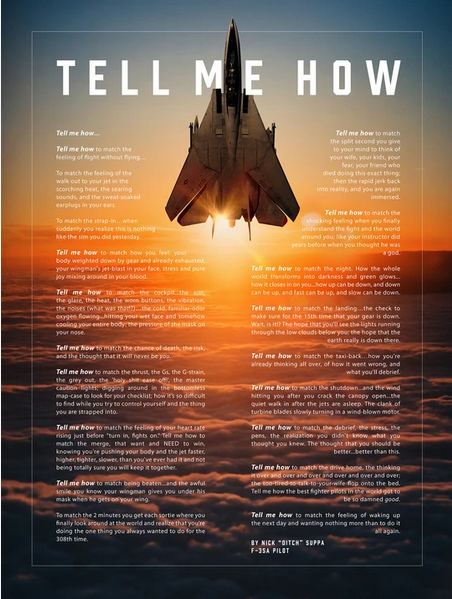