This is the story of the amazing journey started by the son of a WWII fighter pilot, of his father’s log book, and of the many good people around the world who have helped in this quest…

It was one of those late nights when I was trying to catch up on answering emails. I had just cleared the last of them when suddenly my Inbox went from zero new emails (0) – and pinged to one (1). I looked at the sender’s name on my computer screen, but it didn’t sound familiar… however, I did recognise the person mentioned in the email subject line; Lt. Paul Crawford – my good friend, and a local WWII veteran who flew P-51 Mustangs in the China-Burma-India Theatre. The email came from Nick Devaux with a simple question – could I introduce him to Lt. Crawford? Devaux was the son of a WWII fighter pilot, and he wanted Crawford to sign his father’s log book. He would send the book to me, and all I had to do was get Paul to sign it and then send the book on to the next veteran for a similar effort. My first thought was one of confusion at such an unusual proposal, but on closer review it was so clearly pure and honorable in its meaning – it gave me hope about people in this world, that there really are still good people out there…

Here are Nick Devaux’s own words to describe his initiative…

Part of our human experience involves the myriad of attractions and dislikes, both congenital and learned, that we exhibit through life’s journey. As far back as I can remember, the events of WWII held a special intrigue for me. The sheer scale of lives, resources and terrain consumed by it, the technological advancements, the divisions, the alliances, the events leading to, and those since shaped by it, are too staggering to ignore, and absolutely relevant in our world of increasingly shortened attention spans. 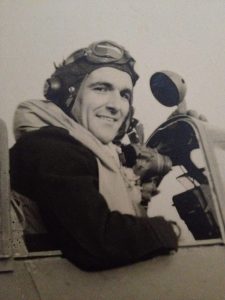 My father Cyril Devaux was born in 1920 into, at the time, British colonial St. Lucia. He was therefore, by comparison, at the senior end of the frontline soldier age spectrum when the war began in Europe during September 1939. As Britain struggled under early Nazi gains, the colonies rushed to “do their part” and young men signed up in droves, no doubt spurred on by adventure, employment opportunities and a chance perhaps to do something completely different. I understand my grandmother played chief spoiler in her son’s plans, managing to delay his departure until 1943 when he left for Alberta, Canada. By then, with the war’s tide firmly turned, my father’s formal training with the RAF stretched over 10 months from January to October 1944; light years away from the desperate few weeks crash course to get men flying in the opening stages when Britain’s survival hung in the balance.

By the time he relocated to England, the Allied war machine was making steady progress towards Berlin and Tokyo so that my father never engaged in hostilities. With Berlin’s surrender, he transferred to the Fleet Air Arm in order to serve in the Pacific. In July 1945, he was posted to Royal Naval Air Station (RNAS) Henstridge where he commenced training in Seafires (Spitfires modified for aircraft carrier service). The atomic bombing and surrender of Japan in August 1945 meant that he was never deployed into combat, however he continued to fly with the Fleet Air Arm until May 1946, serving out his final months with 720 Squadron at Ford Sussex. After his discharge he returned to the West Indies where he rose to the level of Managing Director with Barclays Bank PLC, raising ten children with his wife Norah, before his retirement in 1980. He died on 6 February 1997; his tombstone reads “a noble man”.

Like the vast majority, dad never spoke of his military service. Although his war basically comprised a free aviation education, I appreciate much more now, the high casualty rates among aircrew trainees, the perils of wartime Atlantic voyages and the German V-1 rockets used while he was stationed in the south of England. Still, neither he, nor I, would ever compare his experiences to those who survived the true hell of war. When I was about 11, I stumbled upon his pilot’s log book in a bottom drawer of my mother’s dressing table. Instead of pouring over his impeccable handwriting, and retracing his journey detailed in every flight, I was immediately drawn to the few black and white photographs of the aircraft stuck in the book. I have never been especially enamored of aircraft but there was something absolutely magical about the gracefully engineered lines of the Seafire. The 11 year old that I was, proceeded to pluck the photos from the old book, damaging some of the pages in the process; the 50 year old is still searching for them. Thankfully, I was smart enough to hold onto the book.

In early 2016, I read a BBC article about a Japanese fighter pilot named Kaname Harada who reportedly downed 19 Allied aircraft in service that included the Battle of Midway. Harada himself survived being shot down at Guadalcanal. In post war Japan, he struggled to reconcile the violence he had witnessed and been part of, and in later life he founded a nursery for children, and subsequently a kindergarten. He became an outspoken peace advocate and remained a prominent speaker until late in life. Harada’s story prompted the sudden and spontaneous idea within me of asking him to autograph my father’s logbook. There immediately presented the dual challenges of language barrier and a small matter of 8,700 odd miles –  one way – from St. Lucia, where I live.

I managed to contact his family who replied that his health was poor, but I could try later in the spring. It so happened that my then OECS boss, Didicus Jules, was required to visit Japan and, having secured the agreement of Richard Howard and his wife Yoko, associates in Japan, I decided to send the book off in advance. I figured the worst that could happen was that Harada would refuse to sign, and I would just have the book sent back. I realized I was in denial about the “worst” when the day came to actually place the book in the envelope. Sweating profusely, and with every red-flag alarm sounding in my head, I presented the book to Jules to transport to Japan. He was equally horrified when I explained the contents and mission, and tried his best to dissuade me – almost refusing to take it.

Needless to say I was just a tad apprehensive for the next few days until Howard confirmed receipt of the book. Contacting persons well into their 90s is a delicate affair, especially when they are unwell. One is never quite sure when, or how, to follow up. A few weeks later Harada sadly passed away and thus I was never able to get his signature, or his firsthand account.

Within a few days I read of US President Obama’s visit to the Hiroshima memorial in May 2016 where survivor Shigeaki Mori was officially present. Mori not only survived the atom bomb, but subsequently dedicated years of his life tracking down the families of US POWs who had perished in the atomic bombing, eventually getting the names of the fallen US servicemen listed on the memorial at Hiroshima.

Mori’s compelling story, beautifully captured in director Barry Frechette’s documentary, Paper Lanterns, was the answer to “now what?”. We made contact and his reply was receptive, except that he would be unable to sign until his health improved during which time he would be hospitalized. Suddenly this sounded all too familiar. A few weeks later, in July 2016, Howard sent me a photo of Mori’s name humbly and simply written on the last page. That day, the book went from being my dad’s RAF logbook to The Log Book.

Three years, two and a half times round the world, and over 65 signatures later, I have never forgotten Kaname Harada, and the impetus his life story gave me to start this project. If possible, I would like to ask a Harada family member to autograph the book on his behalf. Perhaps that would be a fitting way to end the journey. For now the business of obtaining the signatures remains a priority as there have been several instances of veterans agreeing to sign and then passing away before they could do so. The journey itself has very much taken on a life of its own, and the generosity of persons who have readily jumped in to help the book along its way is simply remarkable. I am humbled for the wonderful kindness shown to me, and the Log Book, all around the world. A network of volunteers and contacts now exists that I could never have imagined at the outset. Among many stellar enablers, Ross Stewart, curator of the Wethersfield Airfield Museum in Essex, UK, has performed yeomen service. I am the richer for all the encounters.

And then there are the signatories’ stories. A document summarizing their remarkable experiences, annotated with the Log Book’s own journey as it travels the world is in progress, it will probably take years to be properly completed. I hope that future generations who encounter the book and the compilation of testimonies, will appreciate the unspeakable horrific suffering and deprivation experienced by millions – on all sides – during World War II and the need to strive continuously for peace and reconciliation.

On the matter of “all sides” I felt it important to get the perspective of at least some of the former adversaries. There is no attempt here to romanticize the tyranny of Nazi or Japanese war crimes and atrocities or indeed that of any other individual, group or nation involved in the war. Then, as now, front line fighting was conducted mostly by young men, boys actually, who, stripped of their individuality, were forged into forces highly trained in the business of ending life. The Log Book therefore also seeks to gain perspective by examining the experience of the individual within the machinery and madness of war. My, very limited, research and interviews with these elderly individuals indicates that – regardless of origin – in the thick of bloody horrendous conflict, a professional soldier will readily give their life, for the comrade in arms alongside them – not the ideologies and causes of those far removed from the front.

Ideally, I would like to get representation from every participating nation. That is probably not going to happen, however I remain committed to getting at least one signature from the nation with the highest casualty rate: Russia. That quest continues.

The logbook itself is something of a contradiction, and the question of what finally to do with it remains. On one hand it is priceless and unique, and on the other, quite ordinary. There is nothing terribly exciting about flipping through pages of signatures, and though I am immensely proud of my father’s service record, his is one of thousands of similar experiences. This August 6th marks the 74th anniversary of the atomic bombing of Hiroshima, and the third anniversary since I first learned about Shigeaki Mori’s legacy. The Log Book is therefore a tribute to all who suffered irreplaceable losses and all who served to purchase the freedoms so often taken for granted today. The book’s real value however, comes from the signatories’ stories, and more importantly, our retelling of them. Otherwise the vital lessons they offer will remain lost to history. Please visit The Log Book page on Facebook to follow the journey. https://www.facebook.com/lucianlogbook/