On August 10th, NASA’s venerable Aero Spacelines Super Guppy delivered the Orion Stage Adapter structural test article to the Marshall Space Flight Center in Huntsville, Alabama. It was one of the many missions supported by the Super Guppy through its long-lived career. NASA has used the Super Guppy for decades as a means of transporting large cargo that would otherwise be difficult to move over significant distances. What many readers may not know is that much of this aircraft, NASA 941, first flew in 1953 as part of a U.S. Air Force Boeing C-97G Stratotanker (s/n 52-0828).

As reported on NASA’s Aircraft Operations website, the transportation of oversized cargo has always been a major problem for logistics planners in both government and private industry. The physical limitations of railroad tunnels, narrow roads, low bridges, and power lines, etc., can render conventional overland shipment of such cargo virtually impossible. This proved particularly problematic for during the early years of America’s ‘space race’, when large rocketry components destined for Cape Kennedy had to be shipped by barge via the Panama Canal or Gulf of Mexico. Such laborious journeys proved intensely costly, both in dollars and scheduling, during a period when there was such little time to spare.

In 1961, California-based Aero Spaceline Industries (ASI) helped solve this problem when it introduced the first Guppy aircraft. Built from a heavily modified KC-97 Stratotanker, the ‘Pregnant Guppy’ featured the largest cargo compartment of any aircraft then built. At just over 19’ in diameter, this massive cavity was specifically designed to carry the second stage of a Saturn V rocket for the Apollo program. The new Pregnant Guppy allowed NASA to deliver crucial oversized cargo to the Cape in just eighteen hours instead of the usual 18 to 25 days aboard a barge!

The program was so successful that ASI followed up with an even larger version of the aircraft in 1965. Dubbed the ‘Super Guppy’, this design featured a 25’ diameter cargo bay, more powerful engines, a pressurized cockpit, and a hinged nose for easier loading of cargo. ASI continued to own and operate this aircraft until 1979, when NASA purchased the aircraft from them. During its illustrious 32 years of service, the original Super Guppy flew over three million miles in support of NASA’s Apollo, Gemini, Skylab, and the International Space Station programs. 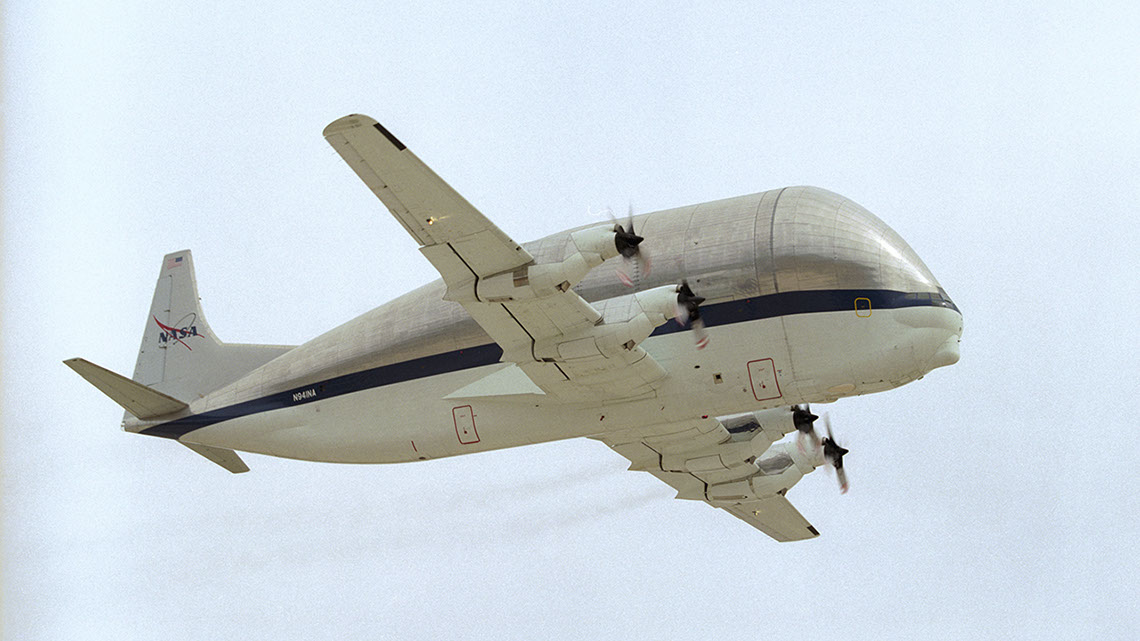 The Super Guppy Turbine (SGT) is the last generation of Guppy aircraft ever produced; only four were built. The most important difference between this variant and its predecessors was its upgrade to more reliable and readily available Allison T-56 turboprops. Operated by Airbus Industries after they purchased them (and the manufacturing rights) from ASI, the SGTs ferried Airbus fuselage components, and other oversized airliner sections, from the varies subassembly factories across Europe during the ’70s, 80’s, and 90s. When Airbus retired its fleet in 1997, NASA was able to acquire SGT number 4 to replace their aging Super Guppy under an International Space Station barter agreement with the European Space Alliance.

NASA’s Super Guppy Turbine continues to support America’s space program today, but with its unique capabilities, it has attracted the attention of other government entities as well. In recent years, the Guppy has been working with the Department of Defense and government contractors to move aircraft and large components around the continent, including T-38s for the Air Force and V-22s for the Navy. Although much of the glory of America’s space program may be behind it, the Super Guppy continues to be one of the only practical options for oversized cargo and stands ready to encompass a bigger role in the future.

From an original text published by NASA.