Director, Pensacola Aerospace Museum
Throughout my lifelong fascination with the mighty F-14 Tomcat, I have purchased a score of books about this magnificent aircraft. I am honored to be in touch with some of these authors, including David Parsons, Tom Cooper, and Heater Heatley, among others. I have also had the honor of purchasing art from Lou Drendel, whose artwork and Squadron Signal Books formed a key part of understanding the capabilities of that aircraft. Lou Drendel’s book forms a particularly interesting record of Test Flying the Tomcat, as he interviewed Emory Brown for his “F-14 Tomcat in Action” Book.
For those who didn’t know, back in the Pre-Internet Dark Ages last Century, Squadron Signal Books were an essential part of any aircraft enthusiast’s library. Short, concise, magazine-like softcovers costing just a few dollars, they were populated by excellent artwork, with a centerfold showcasing a plethora of profiles of various aircraft in different guises. Their cover art was equally dramatic, as were their back covers.
It was while reading such a book as a child that the name Emory Brown first came to my attention. In “F-14 Tomcat in Action”, he provided a highly detailed account of what he termed the “Great DLC Fight with Grumman.” Since Commander Brown’s background as a test pilot in the Tomcat Program is widely known, I believed his perspective on the development of the Tomcat is invaluable and did my own research prior to speaking with him on the phone about the program. On Wednesday, 29 June 2022, nearly exactly a half-century after he became the first Naval Aviator to land the F-14 aboard the USS Forrestal.
The following account relates the highlights of our conversation and is cross-referenced with my original “F-14 in Action” source, and the NATOPS Flight Manual of the F-14A, a copy of which forms a valued part of the Pensacola Aerospace Museum’s reference material. Once again we shall distinguish between ourselves as Pensacola Aerospace Museum (PAM) and Commander Brown, with his rank abbreviated as CDR. Brown.
PAM: Having read the Lou Drendel Book, it is our understanding that you put in months of 16-hour days to get the F-14 Tomcat Program ready for its Carrier Qualifications.
CDR Brown: That is correct. Grumman and the Navy were under a lot of pressure back then to get the airplane on the boat, so photos showing the program’s progress could be shown to the public. I was the first Naval Aviator to land the Tomcat on a carrier, with Commander George White, the first Naval Aviator to fly the Tomcat, riding in back.
PAM: So one of your primary roles in the program was getting the Tomcat Carrier Qualified.

CDR Brown: That is correct.

PAM; In looking at the Lou Drendel Book you mention just how bruising the “Great DLC Fight” truly was. Note: DLC was a spoiler system designed to reduce or increase lift on the type’s wings without changing aircraft pitch attitude or power settings. Given that the aircraft was capable of Mach 2, its slow-speed handling characteristics were essential to the type’s safe operation aboard carriers at sea. DLC worked by a special thumb-operated wheel on the control stick which could activate the spoilers during the final approach to fine-tune the aircraft’s lift and descent rate without needing to add or reduce power given the lag inherent in early Pratt & Whitney TF30 turbofan powerplants.
CDR Brown: Grumman was under a lot of pressure to meet the Navy Specifications on the airplane, and with DLC aboard, the F-14 was roughly 4-6 knots faster than Spec. Grumman was afraid they would be penalized for this breach, and they proposed either first eliminating DLC, then changing the Tomcat’s approach Angle of Attack (AOA) from 15 to 17 units to meet the approach speed spec.
PAM: Tell us what kind of issues that would have caused.
CDR Brown: It would have resulted in a higher pitch attitude and reduced visibility coming aboard the carrier. The airplane simply handled better at 15 than it did at 17 AOA.
This point raised by Commander Brown caused us to look up the Approach AOA for the Tomcat in the Grumman’s NATOPS flight manual. After some digging and after asking Tomcat veterans David Parsons, Heater Heatley, and Larry Splash Coy , what their approach AOA was in service during their time in the Fleet, their answer, along with NATOPS was 15 units. With NATOPS proving Commander Brown’s contention that 15 was the proper approach angle, as he literally wrote the type’s flight manual for Carrier Operations as its Test Pilot, it also gave the following warning; Stalls with landing gear extended and flaps up are similar to those with flaps extended. Buffet starts at 16 to 18 units AOA and wing rock at 26 units A0A. During deceleration in a level 1-g stall approach, the light buffet starts at about 19 units AOA. Buffet does not significantly change thereafter as the AOA is increased and provides no usable stall warning.Therefore as the type’s NATOPS flight manual noted, the F-14 could enter the pre-stall buffet without warning at 16-19 Units AOA. Given that stall speed increases directly proportional to bank angle, any turns during a Tomcat approach could cause a stall on approach, a situation made even more hazardous by the types of trouble-plagued legacy engines, the TF30.
Tomcat Veteran Larry Splash Coy, noted the following; “Only problem with 17 units was that it lessens the margin of error…doesn’t take much after that to find yourself behind the power curve. I was a throttle walker with the TF-30s…couldn’t find that with the GEs as their thrust was almost instantaneous and the nose wandered. 2000 hrs in the A, 1800 in the A+/B. I loved those GE’s !!!!!”
Veteran Tomcat RIO David Parsons also noted; “We flew by the Indexer. RIO calculated approach airspeed and monitored that for deviations as well Vs which was out of pilot’s scan. RIO would verbally call out “on speed…600” and use inflection if needed. During the daytime, VMC, is not needed unless the pilot asked for it. Nighttime or IMC, it was a chant.“
Given the fact that Experienced RIOs were often teamed up with low-time naval aviators, one cannot help but admire their sheer intestinal fortitude as they rode without flight controls in the backseat of a low and slow Tomcat on approach to a carrier with only their intercom to keep their “voice-activated autopilots” out of trouble for them both. 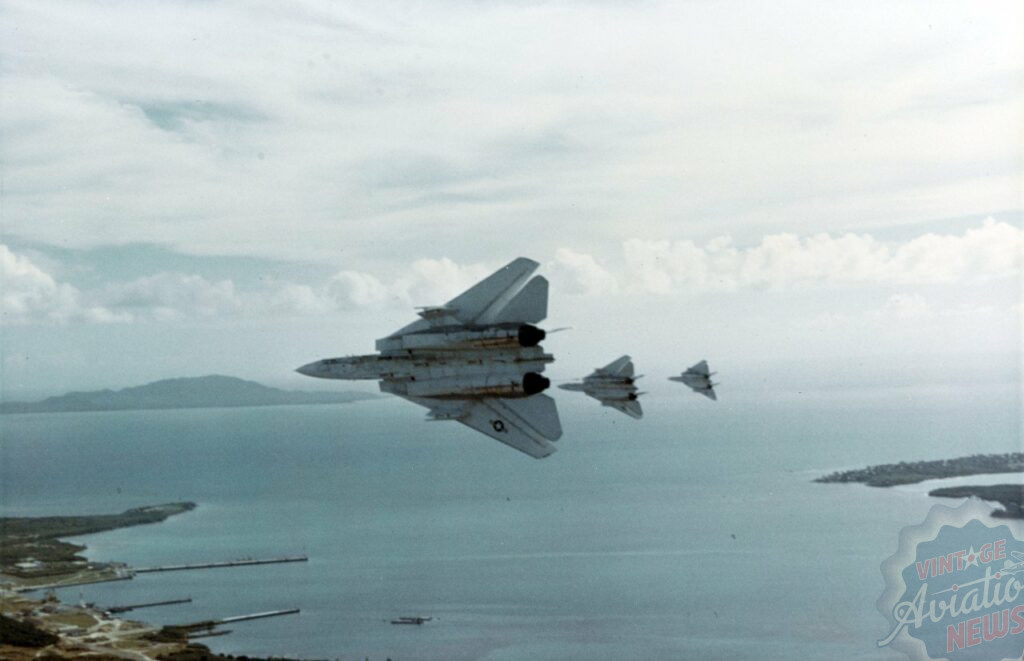 PAM: What other kinds of issues did you run into during carrier testing?
CDR Brown: We had throttles that would stick, and sometimes require a substantial amount of force to unstick. Sometimes the wings would as well. It could be cured by going head down and reaching for the flap handle and wing sweep handle while flying the airplane’s stick between one’s knees. As I recall, you had to get to adjust the wing sweep angle to 22 degrees in order to lower the flaps. My theory then was that this was certainly something that contributed to Bill Miller’s crash.
PAM: What was your perspective on what happened?
CDR Brown: Bill Miller was a class act, a first-class Test Pilot, and a real stand-up guy. The Navy had him fly an airshow to demonstrate the Tomcat and unfortunately, they chose our specially instrumented carrier suitability aircraft. Bill was flying an airshow routine solo, in low ceilings of only approximately 2000 ft. I had my suspicions of what happened right away, and sure enough, when we recovered him and the airplane, we found evidence on his flight helmet consistent with his head being down to reset the wing sweep angle and flaps.
PAM: Certainly a sad loss both personally and to the program.
CDR Brown: Grumman was under a lot of financial pressure then because they were laboring under a fixed price contract during a time of inflation. They were trying their best to avoid any future contract penalties. One thing they did to try and keep DLC off as they told VF-1 and VF-2 which were the first Fleet Squadrons to get the Tomcat that putting DLC on the airplane would cost them the internal Gun.
PAM: What was your response to this.
CDR Brown: We made a film showing landings and successful recovery rates with and without DLC engaged. With DLC it was something on the order of 96 percent, without it it was in the 60s.
PAM: That’s quite a difference. What happened after that?
CDR. Brown: After seeing the films, the Navy had no choice but to back us on this, and so did VF-1 and 2 once they realized that having DLC wasn’t going to cost them their gun.
PAM: It should be noted that the “Great DLC Fight” is in no way meant to impugn Grumman’s reputation, as Commander Brown notes the pressure the company was laboring under. In many ways, the sale of the Tomcat to Iran helped save Grumman itself, as the foreign contract enabled the company to offset the losses with its U.S. Navy contract.
CDR Brown: Another issue was the TF30s, as we were stuck with those engines because of the F-111B.
We believe that by sticking to his guns on these points Commander Brown’s DLC and 15 Degree AOA fight saved countless lives through the Tomcat’s 30-plus years of US Navy service. A type that could have been renowned as an Ensign and RIO eliminator instead became a challenging, but safe airplane to operate at sea aboard the carriers of the United States Navy.
NOTE: This is a transcription of a phone interview, and any errors or omissions on this post are strictly my own.
William Cobb
Director, Pensacola Aerospace Museum

Mr. William Cobb is a licensed Instrument Flight Instructor in Single and Multi-Engine Airplanes who is the founder and director of the Pensacola Aerospace Museum. Mr. Cobb spent from 2008 to 2015 instructing for the U.S. Navy’s Initial Flight Screening program. After 8 years of full-time Flight Instruction, Mr. Cobb started his own Commercial Drone Business, obtaining the first FAA Part 107 certification in his FAA region. Subsequent Drone work led to his becoming involved in Film Production work, and his establishing the Pensacola Aerospace Museum, an entity dedicated to honoring the memory of all those who ever gave their lives to flight. For more information, visit www.facebook.com/pensacolaero