Since his other posts received such a warm welcome, we thought our readers might enjoy another warbird profile from our good friend Randy Malmstrom. As we mentioned before, Randy has long held a passion for aviation history and historic military aircraft in particular. He has a particular penchant for documenting specific airframes with a highly detailed series of walk-around images and an in-depth exploration of their history. If Randy’s last name seems familiar, it is because the U.S. Air Force’s present-day Malmstrom AFB, near Great Falls, Montana is named in honor of his cousin, Col Einar Axel Malmstrom. Col Malmstrom commanded the 356th Fighter Group during WWII, flying P-47 Thunderbolts, the first of Randy’s articles featured an example of the type, P-47D 45-49406 at the presently-shuttered Flying Heritage & Combat Armor Museum in Everett, Washington.

For the third article of this series, we have chosen to highlight the ultra-rare Lockheed M-21 Blackbird drone-carrier variant (s/n 60-6940) on display within the main gallery at the Museum of Flight in Seattle, Washington. 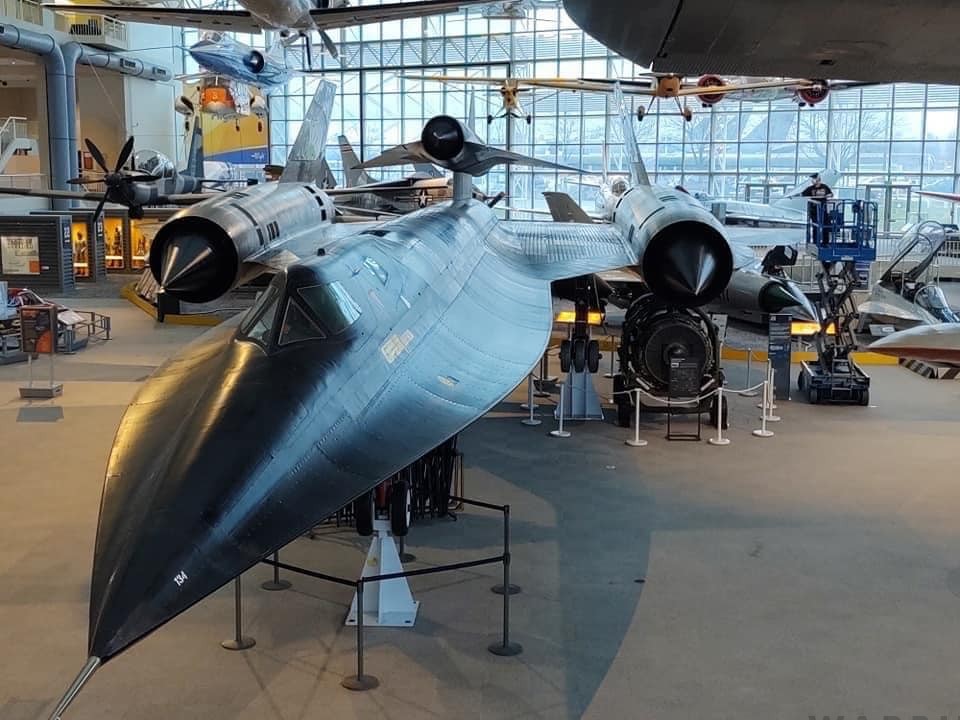 This particular aircraft is an M-21 variant developed from the A-12, the earliest Blackbird type and the forerunner to the more familiar SR-71. Lockheed built the aircraft to play a role in Tagboard, the code-name for a Central Intelligence Agency intelligence-gathering program. The aircraft carried an un-piloted D-21 drone, mounted on its spine. The D-21 had similar speed capabilities to its mothership but, once launched, it could fly over territory considered too risky for piloted Blackbird operations. Unique features to this Blackbird design include the second seat for the launch control officer and or course the dorsal-mounted launch pylon which the D-21 sat atop. This particular M-21 variant rolled off the factory line during 1963, flew just 123.99 hours; it is the sole survivor of the two examples constructed. The other, M-21 60-6941 crashed following a drone-launching accident while traveling at more than Mach 3.2 on July 20th, 1966. The D-21’s engine failed to start the following launch, so the power-less drone collided with the M-21 and caused it to break up off the California coast. While both aircrews ejected successfully as the forward fuselage tumbled towards the Pacific Ocean, tragically the launch control engineer, Ray Torrick, drowned when his pressure suit filled with water soon after landing. A helicopter did manage to rescue the pilot, Bill Parks, but this accident ultimately led to the cancellation of the M-21 program. A pair of Boeing B-52H Stratofortress bombers underwent conversion to carry a modified version of the D-21, the D-21B, which saved the program for a while, but of the four operational missions which the drone flew, not one of them ended with the successful recovery of the film from the spy drone’s camera, and this ultimately doomed the D-21 to cancellation in July 1971.  These photos are by Randy and Don England.

The M/D-21 was one of the few ideas championed by Lockheed’s legendary designer, Kelly Johnson, which didn’t pan out.  The A-12 had originally been conceived as a reconnaissance platform that could fly deep into denied air space (e.g. the Soviet Union), with its near-hypersonic speed and stratospheric altitude essentially rendering it invulnerable to missile attack (from the first flight of the U-2, it was only a matter of time before Soviet missile technology would make the Dragonlady as vulnerable as any other aircraft). However, the A-12 was still in development on May 1st, 1960 when Gary Powers got shot down in his U-2A (56-6693) while flying a spy mission over Soviet territory. The aftermath of this event, which became known as the U-2 Incident, was particularly significant and caused a dramatic deterioration in Soviet-U.S. relations, and there was significant fallout elsewhere as well. Needless to say, the U.S. decided not to continue manned reconnaissance flights over Soviet territory.

The complete history of Lockheed M-21 Blackbird  s/n 60-6940 can be found on the excellent website www.habu.org 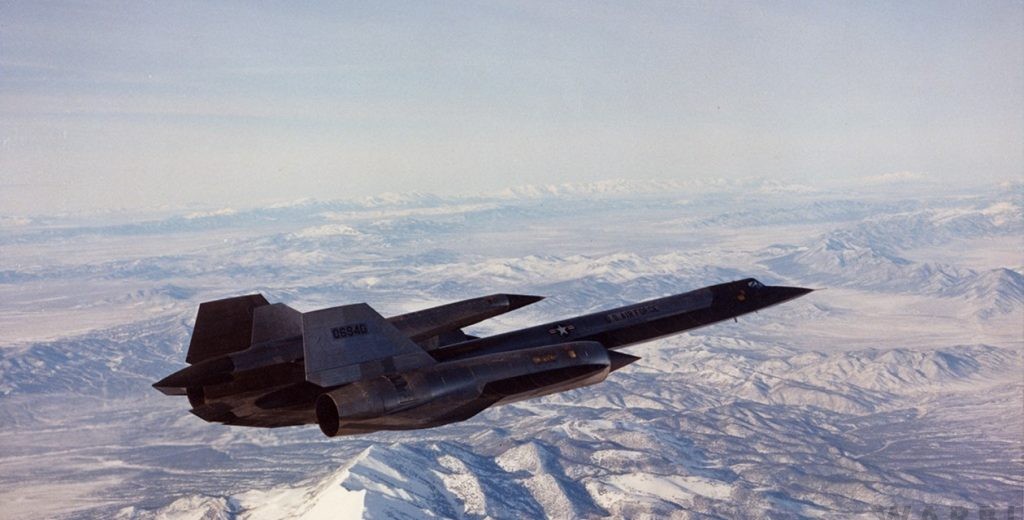 As many readers will know, the Lockheed SR-71 Blackbird was a follow-on development to the A-12. Like the A-12 before it, the aircraft’s procurement was a so-called “black project” – i.e. highly classified and not publicly disclosed. Ultimately, thirty-two examples emerged from the Lockheed-Martin Advanced Development Programs (ADP) or “Skunk Works”, responsible for so many remarkable aircraft designs. Blackbirds served in the U.S. Air Force from 1964 until 1999, albeit with a slight interlude in military operations between 1990 and 1995 due to the type’s premature retirement. NASA also operated a handful of examples. The type gained the sobriquet “HABU”, a nickname that came about when Lockheed A-12 (and then later SR-71) crews began flying into Kadena Air Force Base on Okinawa. The local inhabitants likened the aircraft’s shape to an indigenous snake, the habu,   and began referring to the aircraft as such. When the aircrew learned of this, the nickname stuck and was even incorporated into insignia which the crews wore on their uniforms. Over time, the name HABU became associated with all Blackbird pilots and crews – and yet the HABU patch was only awarded to crews who had flown operational sorties. As pilot Rich Graham explained, “You had to fly an SR-71 on an operational sortie to earn the HABU patch!”

While the SR-71 is recorded as having flown faster than Mach 3 at altitudes surpassing 85,000 feet, the type’s actual top speed is still classified. The aircraft was powered by a pair of Pratt & Whitney J58 (company designation JT11D-20A) after-burning turbojet engines, which used a special kind of fuel, JP-7, more or less unique to the type. The engines required external starting engines and a pair of AG-330 Start Carts with Buick V-8 racing engines powering them (later replaced by Chevrolet engines). The front section of each engine nacelle incorporated a large cone (or “spike”) which essentially acted like a ramjet with a majority of the thrust developing from the airflow through a combination of variable geometry supersonic inlets, bypass doors, and ejector flaps which slid in and out to slow airflow through the engines from Mach 3 to Mach 0.5 when the aircraft was to fly subsonic (efficient operation of the engine inlet requires that it delivers the air to the engine at around 0.4 Mach regardless of the aircraft’s speed. One of the design features peculiar to the SR-71 was that the wet wing fuel tanks would leak on the ground once the airframe was cool enough for the titanium alloy panels to shrink. The designers couldn’t use conventional fuel bladders, nor sealants in the cracks to prevent leakage because those materials couldn’t handle the immense heat generated during high supersonic flight speeds. However, the aircraft’s low volatility JP-7 (jet propulsion 7) fuel would not burn easily –  a lit cigarette falling into a puddle of the stuff on the ground would not ignite it. Obviously, once the aircraft got hot enough during operations, the fuel tank panels would expand and close up any gaps between them. Each engine burned an astonishing 700 pounds of fuel per minute during the aircraft’s cruising speed of 30 miles per minute.

To help reduce those high operational temperatures, however, the oil tanks and fuel lines were coated with a very thin layer of gold plate. Also, the fuel flowing into the engines was effectively used as a refrigerant to cool the engine, hydraulic fluid, oil, triethyl borane tank (injected into the engines in order to ignite them), afterburner nozzle actuator control lines, air conditioning systems, and airframe portions subjected to aerodynamic heating.

A few other interesting details about the type: The Alpha/Beta probe on the nose measures the aircraft’s angle of incidence and yaw; the pitot tube, which measures airspeed, branches off to the side of this unit. The red stripes painted on the airframe, with the words “NO STEP”, are there as maintenance aids to help prevent workers from treading on areas of airframe skin too fragile to bear human weight. The crew sat in tandem, with the pilot up front and the Reconnaissance Systems Officer (RSO) to his rear. Over the type’s history, the SR-71 was fitted with an array of surveillance and reconnaissance gear which could change according to the mission being flown. Furthermore, you will note that the tires have a metallic look to them due to the infused aluminum content to help them cope with high temperatures. The tires are also filled with inert, nitrogen gas to help mitigate combustion risks. Despite their hardiness, however, the tires were typically replaced within 20 missions. Due to its high landing speed, the aircraft had a drag parachute to help slow the aircraft after touchdown and reduce tire wear from conventional braking. The flights were incredibly demanding on the crews, who had to essentially wear spacesuits to fly the aircraft at the altitudes they did. Typical aircrew lost a pound of body weight for each hour of flight due to dehydration – and they could only take a pint of water with them on a flight due to space restrictions.

Despite the SR-71 having been retired for more than twenty years now, it still looks like a futuristic aircraft, more suitable for science-fiction than science-fact. While the aircraft’s role was largely replaced by surveillance satellites, it seems unlikely that there isn’t a replacement of some kind out there that isn’t presently acknowledged in public. The U.S. Air Force’s highly secretive X-37B is a likely candidate for such a role, but its precise mission profile is not discussed openly. Regardless of its now ancient technology, the SR-71 Blackbird is still beloved by aviation enthusiasts everywhere. The Museum of Flight acquired their example of the breed in 1991 and, with its mounted D-21 drone, it is the centerpiece aircraft within their Great Gallery. Interestingly, the museum also displays the forward fuselage of SR-71A 61-7977 nearby the M-21. The original aircraft was involved in a take-off accident in 1968 which wrote off the airframe. However, the cockpit survived to serve as a fascinating museum piece, which the public is allowed access to, giving them at least a small idea of what it would have been like to sit in an operational example of such a beast! 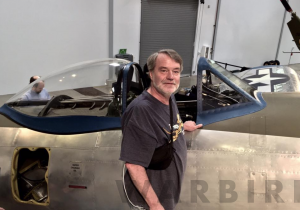 Randy Malmstrom grew up in a family steeped in aviation culture. His father, Bob, was still a cadet in training with the U.S. Army Air Forces at the end of WWII, but did serve in Germany during the U.S. occupation in the immediate post-war period, where he had the opportunity to fly in a wide variety of types which flew in WWII. After returning to the States, Bob became a multi-engined aircraft sales manager and as such flew a wide variety of aircraft; Randy frequently accompanied him on these flights. Furthermore, Randy’s cousin, Einar Axel Malmstrom flew P-47 Thunderbolts with the 356th FG from RAF Martlesham Heath. He was commanding this unit at the time he was shot down over France on April 24th, 1944, spending the rest of the war as a Prisoner of War. Following his repatriation at war’s end, Einar continued his military service, attaining the rank of Colonel. He was serving as Deputy Wing Commander of the 407th Strategic Fighter Wing at Great Falls AFB at the time of his death in a T-33 training accident on August 21st, 1954. The base was renamed in his honor during October 1955 and continues to serve in the present U.S. Air Force as home to the 341st Missile Wing. Randy’s innate interest in history in general, and aviation history in particular, plus his educational background and passion for WWII warbirds, led him down his current path of capturing detailed aircraft walk-around photos and in-depth airframe histories, recording a precise description of a particular aircraft in all aspects.