As we reported recently, the aviation-themed TV miniseries, Masters of the Air, has officially begun filming in Britain. Based upon Donald L. Miller’s compelling book, Masters of the Air: America’s Bomber Boys Who Fought the Air War Against Nazi Germany, the production will follow the true and deeply personal story of the American bomber crews who brought the war to Hitler’s doorstep in World War II. The saga is the third small-screen limited series collaboration between producers Steven Spielberg and Tom Hanks, who also shepherded the highly-acclaimed WWII epics Band of Brothers (2001) and The Pacific (2010) for HBO. This series will run on Apple TV+.

So far, we know of two locations in Britain where principal photography will occur: Dalton Barracks near Abingdon, Oxfordshire, and another site in Chalfont St Giles, Buckinghamshire which the production team has already transformed to represent the bustling personnel hub of a US Army Air Forces airfield, complete with a collection of full-sized Nissen Huts and other outbuildings.

Dalton Barracks is presently home to elements of the British Army’s Royal Logistics Corps, but until 1992 the base was an active Royal Air Force airfield known as RAF Abingdon, which dates back to the early 1930s. Based upon our research and images which recently appeared on social media, it looks like Dalton Barracks will serve as the production company’s setting for outdoor airfield operation scenes for Masters of the Air. Once the news got out, it didn’t take long for British aviation enthusiasts to make the pilgrimage to Abingdon in the hopes of capturing images of what was unfolding there. And indeed, one of these pilgrims, Nick Taylor, shared some of his pictures from the set with us which clearly reveal a pair of full-scale mockups for B-17 Flying Fortresses which served in the 100th Bombardment Group. According to reliable sources, these replicas, while not airworthy, were designed to be highly accurate reflections of the original airframe design, both inside and out. The fuselages, for certain, were built using original factory drawings, and at least one of the Forts has runnable engines.

From the photographs we have, it is clear that one of the replicas currently represents B-17F-85-BO 42-30064 Wild Cargo while the other is B-17F-30-VE 42-5867 Alice From Dallas. While these mockups will likely depict other tail numbers during filming, it’s clear that Alice From Dallas and Wild Cargo represent an aspect of the storyline, so it makes sense to delve into their histories a little… 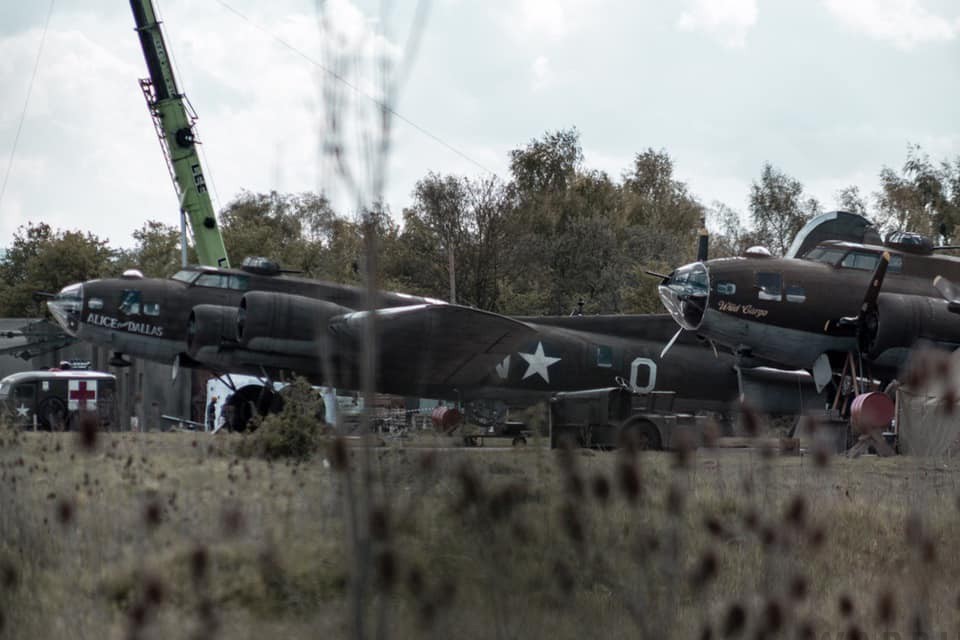 Alice From Dallas was a Vega-built (Lockheed) airframe, rolling off their factory production line in Long Beach, California on April 2nd, 1943. She the joined the 350th Bombardment Squadron, 100th Bombardment Group at Thorpe Abbotts on May 30th, 1943, but lasted only a few weeks more than Wild Cargo. Missing Air Crew Report 678 shows that the Army Air Forces declared the Fortress Missing in Action on a mission over Regensburg, Germany on August 17th, 1943. Flak damage knocked out two of her engines, and while most of the crew managed to bale out, the ball turret gunner, Bill Hinton, and one of the waist gunners, Edmund Musante, were not so lucky. Musante’s parachute hung up on the aircraft’s tail, while Hinton likely died when the aircraft crashed five miles east of Hasselt in Langerloo, Belgium. Of those who did successfully bale out Roy Clayton (pilot), Ray Nutting (co-pilot), John Burgin (flight engineer/top turret gunner), Bill Quinn (radio operator), Chas Bailey (waist gunner) all managed successfully evade capture. The Germans managed to capture Oscar Amison (Navigator) and Cliff Starkey (tail gunner) fairly quickly, while Ken Lorch (bombardier) spent eight months on the lam before he too became a prisoner of war.

Another set of interesting photos came from Hal Colliver, a British aviation enthusiast and pilot, who shared the aerial pictures below with us showing Dalton Barracks. They clearly depict the B-17s on their hardstandings, mimicking how they might have appeared during their original forebear’s service at Thorpe Abbotts during WWII.

Given the aircraft movie props revealed so far, and that the list of actors presently cast for roles in Masters of the Air all represent real-life characters within the 100th BG, it feels safe to say that the series will focus upon that specific unit, and the many  experiences of its personnel. Much like the way Band of Brothers depicted the Screaming Eagle paratroopers of Easy Company in their advance from training ground neophytes to the battle-hardened and withered ranks who ended the war triumphant at the Eagles Nest in Berchtesgaden, it seems likely that Masters of the Air will follow a similar narrative arc, leading us from the 100th BG’s formation Stateside and their training, to the fight across the Atlantic (ground crew sailed aboard RMS Queen Elizabeth) to their wartime home at RAF Thorpe Abbotts in the flat farming country of Norfolk, England… and the ensuing melee over Europe which followed. The 100th BG bomber crews experienced some of the steepest losses during the early stages of America’s participation in the Allied strategic bombing campaign over Europe, gaining the brutally-earned sobriquet, “The Bloody 100th”, so there will be plenty of high stakes drama to reenact faithfully on the screen. (As an aside, the late David Tallichet, who established a vast collection of flyable warbirds, was himself a veteran pilot from the Bloody 100th.)

As was true for Band of Brothers, the cast of actors in Masters of the Air will feature a long list of talented, though largely unknown names whom viewers will likely remember long afterwards. We can glean some idea of what stories may feature in the miniseries based upon the published list of real-life airmen being represented. These include Major Gale Cleven (Austin Butler), Major John Egan (Callum Turner), Major Rosie Rosenthal (Nate Mann) and Sgt. Ken Lemmons (Raff Law), all of whom have significant stories to contribute. Sgt. Ken Lemmons was a crew chief in the 100th BG, so his character will likely prove a focal point for the group crew perspective of the war. And given the other names listed above, it seems clear that two missions will feature prominently in the series; the August 13th, 1943 Schweinfurt-Regensburg mission where nine of the twenty one 100thBG Forts participating failed to return, and the October 10th, 1943 mission over Münster where just one of thirteen B-17s from the group made it back, that being Major Rosenthal’s Royal Flush. His B-17F limped home on just two engines, with no intercom or functioning oxygen system, and a gaping hole in the starboard wing; it was just Rosenthal’s third mission. Major Egan, who led that mission over Münster, became a POW that day. Interestingly, Egan, who was the 418th BS’s commanding officer, was only aboard that mission to avenge his great friend Gale Cleven, who had gone down over Bremen two days earlier. Cleven and Egan were roommates during their training back in the U.S., so it seems likely that their friendship will feature closely in the story’s backbone, much as the relationship between Lieutenants Dick Winters and Lewis Nixon featured heavily in Band of Brothers. Indeed, Cleven became famous during training for buzzing a runway, at tree-top height, with all four of his engines feathered, a scene which hopefully makes it into the plot line! Furthermore, both men were reunited as bunkmates, soon after being shot down, at the Luftwaffe-run prisoner of war camp Stalag Luft III, which many may remember as the setting for The Great Escape…

So one can easily imagine how much dramatic material the screenwriters will work into the plot, and given the producer’s magnificent track record, it seems certain that Masters of the Air will become the authentic masterpiece we all hope it is destined to become!